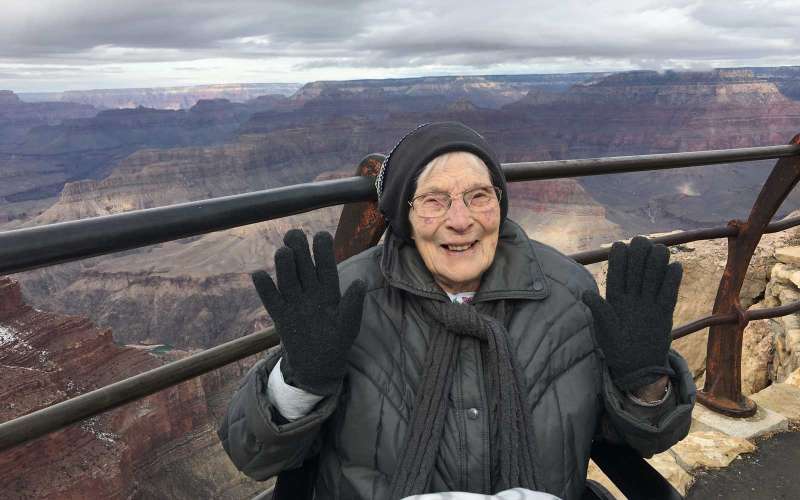 A 103-year-old woman was named the National Park Service’s oldest Junior Ranger at a park she’s actually older than.

Generally, the Junior Ranger program is a stewardship program used to engage children and families in the preservation of national parks. But when Rose Torphy visited the Grand Canyon National Park last month, she felt inspired to join the program.

“My parents taught me to care for the land but not all kids have that,” Torphy told Good Morning America. “I’m happy to protect it for my great-children to visit one day.”

Torphy was granted the “Scorpion” level of Junior Ranger, typically reserved for those aged 11 and older.

As a junior ranger for the park, Torphy has taken an oath to “explore, learn and protect” the park. Because Torphy visited the park during the national government shutdown, the Grand Canyon Conservancy performed her swearing-in ceremony.

She was sworn in from her wheelchair at the park’s souvenir shop. Torphy signed a certificate indicating her membership to the club dedicated to education and preservation and now wears a pin on her jacket.

Torphy first visited Grand Canyon National Park back in 1985, when she said she was able to walk around and explore the park by foot. Due to increased accessibility access, she was still able to return to many of the same spots she remembered.

“I was very impressed with the wheelchair access and ramps,” Cheri Stoneburner, Torphy’s daughter, told Good Morning America. “We were able to get to an edge where she had taken a photo with my dad on their visit in 1985,” she said.

On Feb. 26, the Grand Canyon will celebrate its 100th year as a national park.