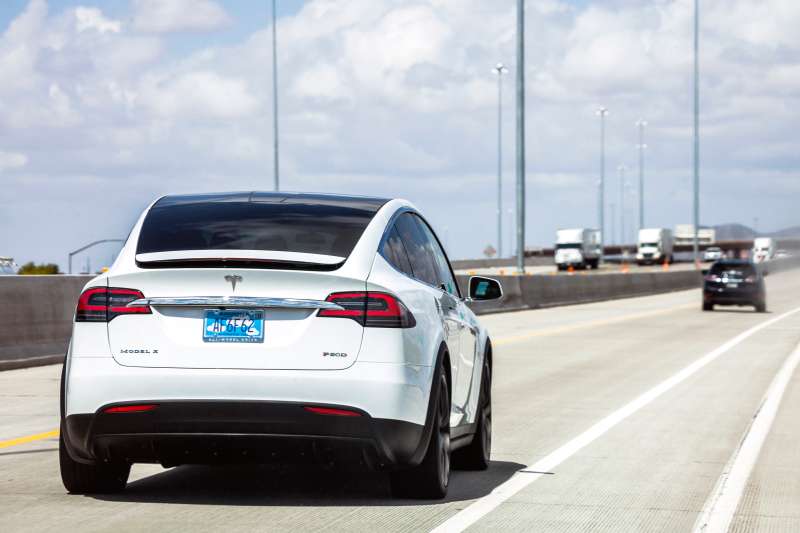 Tesla Model X on the highway in Arizona.
peeterv—Getty Images

As Chad Hurin puts it, he’s not a car guy. But he is a Tesla enthusiast.

The Model S and Model X are notoriously expensive vehicles, but Hurin and his wife, Min, decided to pay for them using Turo, a luxury car-sharing service.

Turo rents out luxury cars in 5,000 cities, including San Diego, Denver, and Boston. A quick scan of the listings shows everything from a Mercedes-Benz AMG GT to a Maserati Ghibli. Prices range from $29 to $200 per day, depending on the brand.

Chad Hurin said they started renting out the Model S in February and the Model X in May. The couple has earned $25,000 through the service, but that doesn’t account for fees Turo collects for setting up the rental. Still, it’s been enough to pay off the Hurins’ monthly car loan payments and insurance with some cash left to spare.

Fifty-two percent of Turo renters said they use the service to pay off car loans, according to a company survey. Most Model S owners can pay their monthly loan after listing the Tesla for just seven days on Turo.

“We haven’t had to pay a dime since placing the down payments on the car,” Hurin said.

Chad and Min met in Fayetteville, North Carolina when they were students at Cape Fear High School. The two moved to San Diego in 2015 when Min was stationed there by the US Navy.

When Min was out on deployment, Chad started researching self-driving cars online. As a software developer, he was interested in learning more about Google’s and Apple’s autonomous car projects. That’s when he saw Tesla, an electric automaker, was already selling cars with self-driving capabilities called Autopilot.

“The Autopilot is what attracted me because I’m very fascinated with the future of cars,” Hurin said. “I didn’t know who [Tesla CEO] Elon Musk was until I started following Tesla a few years ago.”

Once he learned more about the company, Hurin said he was “hooked.” He started following Musk on Twitter and bought Ashlee Vance’s biography on the eccentric billionaire. He started talking to Min about buying the Model S 60, the most affordable option on the market.

“Turo was what convinced my wife to let me buy it,” Hurin said. “Putting it on Turo was the whole reason we bought the first one and the second one was the same thing.”

Most Tesla listings on Turo in the San Diego area go for $200 a day, Hurin said. The duo, however, wanted to go below the market price so they could secure some positive reviews. They initially listed the Model S for $110 a day, but have since bumped the price to $127. They charge $135 for the Model X.

Turo users can earn up to 90% of the total rental price after the service takes its cut. The Hurins, however, earn 60% because they opt to pay for Turo’s Premium insurance package, which covers small scratches, food stains, and the lingering stench of cigarette smoke.

Hurin said splurging for the most-expensive insurance option was the right choice as both cars have suffered damages 10 times. The most serious was a large scratch on the Model S bumper, but there haven’t been any serious accidents so far. The Hurins have never had to personally cover the cost of any damages.

Perhaps the biggest issue with relying on a service like Turo is it racks up miles. The Model S, purchased in February, already has 19,400 miles. The five-month-old Model X has 16,400 miles.

Hurin said each car can only be driven 200 miles before the renter is charged a 99-cent fee per mile. He said vehicle depreciation is a concern but notes that electric vehicles require less maintenance. He cited how a Model S owned by mobility service Tesloop has driven 300,000 miles with less than $11,000 in maintenance costs.

“It being an electric car, there aren’t as many things you need to do as a regular, gas-powered car,” he said.

Taking advantage of Turo has had some other perks. Because they own a Model S and Model X, the Hurins were able to cut the line to reserve a Model 3, which is estimated to arrive by the end of December.

Turo offered the couple $500 simply to list the Model 3 on the service.

The Hurins have also given renters their referral code to buy Tesla vehicles — and earn rewards from the company every time someone uses their code to buy a Tesla.

So far, 11 renters have purchased Tesla vehicles using the Hurins’ referral code. Tesla gave them a discount on solar panels, which they had installed on their roof this year. They will also get two red Powerwall batteries signed by Musk and an invite to Tesla’s semi-truck unveiling in November.

Turo isn’t bound to have the same success for everyone as it has for the Hurins. As a software engineer, Chad Hurin can work from home and adjust his hours on a whim, allowing him to rent out the Model S for long stretches of time. The service may not reap the same number of benefits for someone more reliant on their personal car.

But it shows how buyers are using mobility services to profit off cars that typically sit idle in driveways or parking lots.

“A Tesla was something I’ve always wanted and I love introducing people to the cars,” Hurin said.