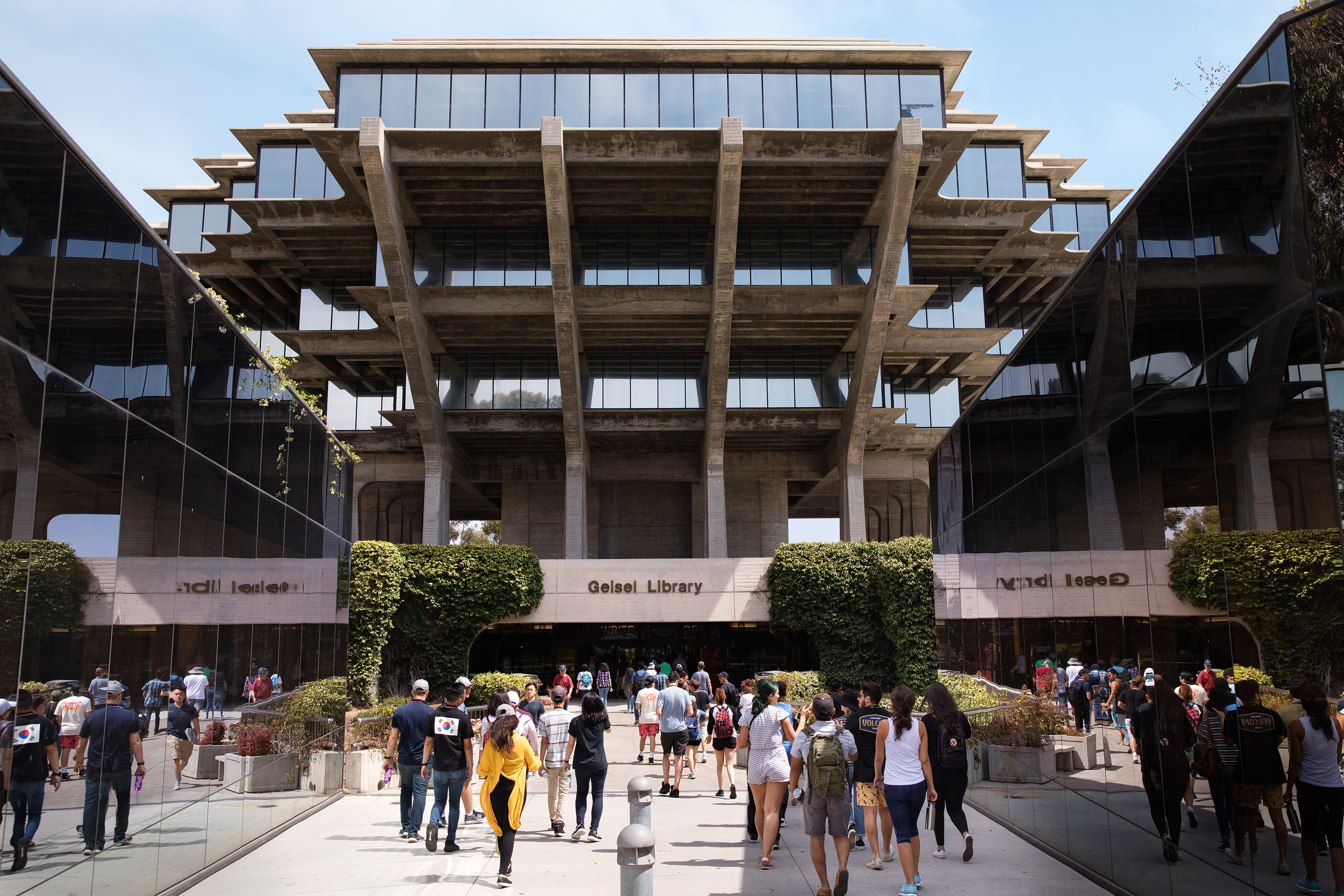 Students head for Geisel Library (named after author-illustrator Theodor Geisel, a.k.a. Dr. Seuss) at the University of California at San Diego.
Photograph by Richard Benson for Money

These Are the 25 Best Colleges in the U.S. Right Now

College is a great investment — if you choose the right school. MONEY identified and ranked more than 700 leading institutions that are worth the cost; these are our top picks.
By Kaitlin Mulhere

Robin Schaad sat down to break the disappointing news. Even after receiving an appeal for more money, her daughter’s top-choice college — a well-regarded engineering school — hadn’t offered enough financial aid.

They went over the pros and cons together: what her daughter would study, how much she'd owe upon graduation, and how that might handicap where she could live or what jobs she could take. For a teenager, the weight of future bills — she’d likely be paying hundreds of dollars each month as a fresh grad — can be hard to grasp.

But Schaad’s guidance ultimately swayed her daughter, who enrolled at her second choice, Monmouth University, in New Jersey. And through a combination of merit aid, savings from a 529 plan, and money from a summer job, they paid for the first year at Monmouth without borrowing a single dollar. (Use Money’s interactive ranking tool to find the right college for you.)

As sophomore year approaches, there’s no doubt in Schaad’s mind that they made the smart choice. It was a simple decision, she says: “Choose the best college you can actually afford.”

That’s sound advice. Research recently published in the Journal of Consumer Affairs found no correlation between college prices and how alumni rate the value of their college experience. That means there are outstanding colleges that are low cost and some expensive schools that are falling short.

The challenge for families is figuring out which is which: What makes a college the best deal?

Money has developed a comprehensive analysis to help you determine just that. Our rankings — you can see the whole list here — identify colleges that have a strong record of helping students graduate and preparing them for jobs at which they’ll earn enough to pay off their debt. (Monmouth, for instance, lands at No. 358 — just about the midpoint of this year’s list.)

Princeton University, which tops Money’s Best Colleges list for the third straight year, hits the trifecta. It excels academically, with small classes and world-class professors. It has an outstanding financial aid program that delivers grants to 60% of its freshmen — a higher share than at other Ivy League schools — and that generally covers tuition for families earning up to $160,000. And it produces successful graduates, who snag competitive, high-paying jobs within a few years of leaving school.

Beyond that familiar No. 1 are some fresh faces. The University of California at San Diego (No. 2) shot to the top of our rankings this year with one of the highest six-year graduation rates in the country for a public college, plus an impressive record for boosting low-income students into the upper middle class.

For Californians, UC–San Diego is a great value too. The average student who borrows leaves with about $18,500 in debt, roughly half the national average, and recent grads report earnings that are 14% higher than those of grads from universities with similar student bodies.

That’s happy news for Leanne Cook, whose daughter Alyssa is headed to UC–San Diego in the fall to study biology. Alyssa didn’t want to travel too far from home, so they focused their search on colleges in the southern half of California. But getting into any of the highly competitive UC schools can be challenging, says Leanne: “You can’t predict anything.” So when the acceptance letter from UC–San Diego came last spring, they were thrilled.

A view of the Pacific from UC–San Diego's Scripps Institution of Oceanography.
Photograph by Richard Benson for Money

San Diego’s reputation as a studious campus known for research won them over. And because Alyssa expects to go to graduate school, the cost for her bachelor’s degree was a prime consideration.

The Cooks are not alone in that concern. Freshmen who enroll at one of Money’s Best Colleges will owe an average $24,000 this fall, after subtracting aid given by the colleges. And nearly seven in 10 freshmen say they worry about how they’ll pay for their college education, according to a national survey conducted each fall by researchers at UCLA.

That’s why it’s so important for families to have transparent information about the costs and payoffs of different colleges, says Tara Miller, a counselor who works with college-bound students at Austin High School in Texas.

“I tell them to try to think with their heads and their pocketbooks rather than just their emotions,” Miller says.

Money encourages students to do the same. In compiling the Best Colleges rankings, we looked at 26 measures that span three general areas: educational quality, affordability, and alumni financial success. In each category, we include at least one measure of the “value added” by a given school — a way of seeing how a college performs after controlling for the average test scores and family income of its student body.

This year we also introduced two metrics from newly available federal data — the number of Pell Grant recipients and the share of transfer students who earn a degree. Both help us get a fuller picture of a college’s graduation rate.

The result is a diverse group of more than 700 colleges that offer a return on your money.

Of course, it would be impossible for us to define which is truly the best college for you — that’s a personal decision. As you search for your own fit, keep these two questions in mind.

How long do students take to graduate?

Most students enroll expecting to leave with a bachelor’s degree four years later. Yet at many colleges, an extra semester or year is the norm. Nationally, it takes students 4.8 years enrolled at a private college to graduate, and 5.2 years at a public college, according to the National Student Clearinghouse.

Bringing those completion times down is one of the biggest things colleges can do to rein in costs for families, says Sandy Baum, an economist who studies higher education. Researchers at the Federal Reserve Bank of New York estimated in 2014 that attending for a fifth or sixth year can cost you more than $60,000 in tuition, fees, and forgone earnings. That reduces the rate of return for a bachelor’s degree by 20% for each of those two extra years.

Many colleges are now testing ways to help students avoid those extra semesters. At least 200 colleges in our rankings improved their four-year completion rates by at least 10 percentage points in the past decade. That means at least 60,000 more students were able to get a degree without paying for an additional semester — or year — of schooling.

The University of Portland (No. 115), for example, has hired additional academic advisors and introduced software that enables students to better track their progress toward a degree — a move that frees up advisors to tackle bigger questions about academic interests or career goals. The university also started requiring professors to issue midterm grades in entry-level courses, so first-year students transitioning to college-level work can gauge how they’re doing early on, with enough time remaining in the semester to make changes.

Portland’s four-year graduation rate is now 75% — up 16 percentage points over the past decade.

The Yale University Art Gallery. Yale is tied with Princeton for the highest six-year graduation rate in the country — roughly 98%.
Michael Marsland—Yale University

And the University of Minnesota at Twin Cities (No. 77) has improved its four-year graduation rate by more than 25 percentage points in the past decade, in part by pairing increased financial aid with advising changes. The university expanded eligibility for its need-based Promise Scholarship, which now provides awards to families earning up to $120,000 — nearly double the state’s median income, and an increase from the original $50,000 limit. It also established a handful of scholarships aimed specifically at middle-income students.

Why that worked: Financial stress is one of the most common reasons students drop out of college or switch to part-time. (In fact, research by Civitas Learning found about 40% of drop-outs are strong students with a GPA of at least 3.0.)

What happens on campus?

Of course, simply getting a degree in four years doesn’t guarantee you a good job at graduation. What happens while you’re enrolled is equally important.

And today, the best colleges are offering — and increasingly requiring — a variety of hands-on learning experiences that help connect students’ academic work with what they’ll be doing in their careers.

Worcester Polytechnic Institute (No. 158), for instance, has extended its existing project-based curriculum to first-year students: Its popular Great Problems Seminars aim to teach budding engineers how to understand the environmental and societal causes of problems before they set out to create technical solutions.

The approach shows students why their education is important, says Art Heinricher, dean of undergraduate studies at WPI, and gives them a glimpse of what they’ll be able to accomplish once they survive those tough science and math prerequisite courses.

Project-based learning doesn’t only apply to the STEM fields. Students in the Asian studies department at Stony Brook University (No. 34) mix theoretical knowledge of Asian history and culture with skills they can translate into a work setting. Recent projects range from organizing digital records of Chinese artifacts to developing a campus educational campaign about the effects of hepatitis B on Asian communities. Student interests drive many of the project topics.

These sorts of learning experiences have measurable outcomes. Recent grads of WPI and Stony Brook, for example, report salaries of about $69,200 and $54,300, respectively, according to PayScale. Both are a premium over what graduates earn at colleges with similar student body profiles.

Additionally, students who had benefited from at least three social or experiential learning opportunities — whether through the curriculum or via volunteer projects and internships — were three times as likely to say their college prepared them well for life after school as those students who had just one, according to joint research by Strada Education Network and Gallup.

Christie Crandall is one of those students. A senior engineering science and mechanics major at Virginia Tech (No. 29), Crandall will graduate with three different undergraduate research assignments under her belt — including one partially financed through a fellowship she won.

Crandall, who also works with freshmen as the director of the Student Government Association’s First Year Leadership Experience program, says she encourages new students to explore what the campus has to offer. “Every year I find something new,” she says.

If there’s a silver lining to ever-rising college costs, it’s that they’ve pushed families to think about outcomes more than ever before. Families want to know that if they borrow tens of thousands of dollars for college, the degree will be worth it, says Michael Itzkowitz, former director of the federal College Scorecard website.

“They want their chances of success to be better than a coin flip,” he says.