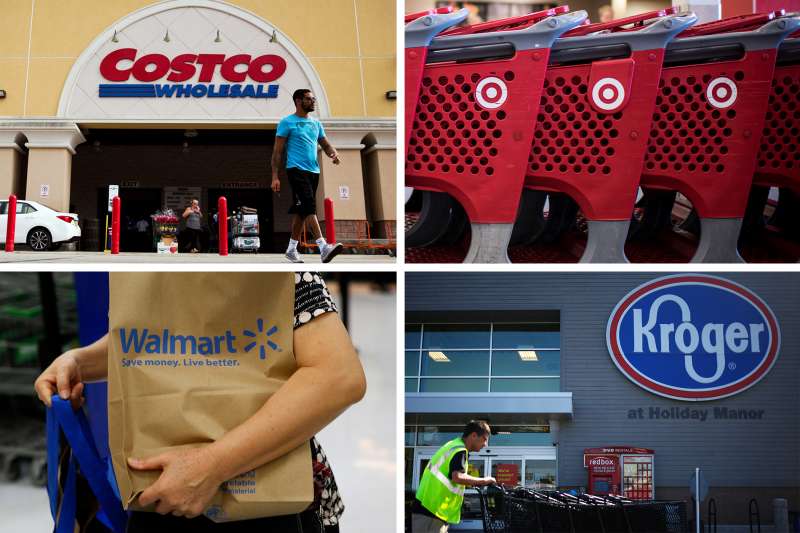 Shares of the nation’s largest grocery store chains tanked on Friday after Amazon.com announced it was buying Whole Foods, the upscale organic supermarket that caters to the American upper middle class.

Supervalu, which operates Cub Foods and Shoppers and Shop ‘N Save in the Midwest, slumped 14% at the end of trading on Friday. Shares of Kroger, the largest traditional grocery chain, plunged more than 9%.

But it goes beyond traditional supermarkets. The giant warehouse club Costco sunk 7%.

A customer shops inside a Costco Wholesale Corp. store in Miami, Florida, on Monday, Dec. 5, 2016.
Scott McIntyre—Bloomberg via Getty Images

And the discounter Target dropped 5%.

A sign hangs outside a Target store on November 16, 2016 in Chicago, Illinois.
Scott Olson—Getty Images

Even Wal-Mart, currently the world’s largest retailer and holder of the #1 spot on the Fortune 500 list, dropped nearly 5%, even as the company announced the $310 million purchase of Bonobos, an upscale men’s fashion retailer, after buying Jet.com earlier this year.

A customer pushes a shopping cart at a Wal-Mart Stores Inc. location in Burbank, California, on Nov. 22, 2016.
Patrick T. Fallon—Bloomberg via Getty Images

Investors appear to believe, at least for the moment, that Amazon will do to supermarkets what it did to books, record stores, and general merchandise.

“The stock pressure reflects justified investor concern that competitive pressure in the grocery space may intensify with the added long-term threat of Amazon taking a significant position in the space,” noted Morningstar analyst John Brick.

“Prior to this deal, we had already been concerned about a tough competitive environment as deflation and the entrance of Aldi and Lidl would likely negatively impact margins and this threat had already been baked into our assumptions,” he wrote in an analysis about Kroger stock. “However, we now think that a Whole Foods/Amazon tie-up could further exacerbate the pressure as we expect Amazon to re-position Whole Foods more aggressively at lower average price points, leading to additional margin degradation in the space.”

Now, any slip up among traditional grocers will be viewed in a negative light. Earlier in the week, Kroger reported its first same-store sales decline in more than a decade.

“A day earlier, Kroger stock posted a double-digit decline amid food price deflation and stiff competition in the grocery space,” says Bankrate.com senior economic analyst Mark Hamrick. “For it and other long-existing players in the space, they have to be wondering whether a competitive time bomb has begun clicking.”

Wal-Mart remains the undisputed leader in market share for food and beverage purchases, with Kroger a distant second. Amazon is well behind the pack, and won’t make up that much ground even with the addition of Whole Foods.

But this could be the start of a serious push to Amazon-ize the way Americans buy food.

“We think the news could presage a major long-term disruption of the grocery business by Amazon, as the company further leverages its technology, logistics and fulfillment infrastructure,” notes a report by CFRA, which maintains a “buy” recommendation on the stock.

Who knows if you’ll order fresh peaches and tender steak from Whole Foods, delivered to your door by Amazon, in the next few years, or decade. But very few people have gone broke betting on Jeff Bezos figuring out how to sell to the American public.