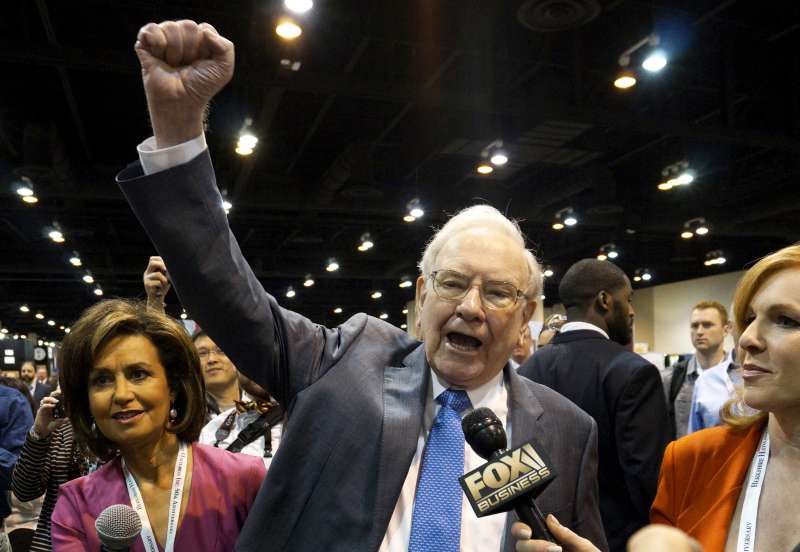 Berkshire Hathaway is the quintessential capitalist story of meritocracy, grit, and hard work. Humans have a certain fundamental attraction to these success stories that happen against any measure of statistical improbability — this notion of exceptionalism. The best of these stories provide a window into ourselves — that which we are, aren’t, or hope to achieve. Berkshire and its leader, Warren Buffett, in many respects, represent all of these things on some magnified scale.

It is in this spirit that — as shareholders, investors, and lifelong students of great businesses — a group of Fools and I gathered to hear Warren Buffett and Charlie Munger hold court at Berkshire’s 50th-anniversary shareholder meeting. Well, us and a sellout crowd of more than 40,000.

In its 50th year, Berkshire is still a success story that defies traditional classification, both for the scale of shareholder wealth accrual and its seemingly impossible string of consecutive wins. From its relatively humble roots as an investment partnership — itself an incredibly difficult business — to its radical several-decade transformation into an investment, insurance, and industrial conglomerate, Berkshire has continuously defied classification. Where many businesses hardly withstand the test of a decade or two, Berkshire has dominated across a decades-long horizon.

Throughout, from the 1965 acquisition of a struggling textile mill some 50 years ago, transformational acquisitions of insurers (National Indemnity, GEICO, and Gen Re, along with the formation of Berkshire Hathaway Re), and subsequent forays into capital-intensive regulated businesses — namely, utilities and railroads — Berkshire has been different. It has remained relentlessly focused on a more ethical breed of capitalism, shareholder wealth accrual, and fair treatment of its employees.

And so, as investors, we study its success, for clues and in awe. What follows are several bits from the Berkshire 2015 — of evergreen wisdom, notable Berkshire developments, and sage investment advice from the meeting.

Across the past two years, the most notable development in all of Berkshire has been the conglomerate’s expanding relationship with the ruthlessly efficient, obsessively cost-cutting Brazilian private-equity shop 3G. Berkshire partnered with 3G on deals to acquire H.J. Heinz and Kraft Foods . They’re among Berkshire’s largest deals in some time, and the partnership hasn’t been without controversy.

At various points across the day, shareholders questioned 3G’s ethos and philosophy as being at odds with Berkshire’s historically cushier brand of capitalism. 3G plays hardball, or so it seems, but Buffett brushed these criticisms off.

“You will have never found a statement from Charlie or me saying that a business should have more people than needed,” he said. “3G has been buying businesses that have too many people.”

More to the point, he cited consumer-goods firms as still ripe for consolidation. The opportunity, for Berkshire and 3G, is substantial — to streamline other organizations, by feeding fatty, lazy consumer-goods firms’ wares through the combined Heinz-Kraft entity’s formidable supply chain. And for Berkshire shareholders, it might prove to be the elephant gun-sized deal they’ve long awaited.

Consider the potential: Yum! Brands’ market cap is $40 billion, Mondelez sits at $64 billion, Hershey is valued at $21 billion, and Campbell Soup currently fetches $14 billion. I’d expect deals of this flavor to be of increasing import, and a key source of upside optionality in Berkshire shares for decades to come. Viewed 20 years hence, the 3G partnership could indeed prove to be one of Buffett’s master strokes.

On account of what, in simplest terms, amounts to a tax loophole, reported taxes at Berkshire’s regulated utilities are significantly higher than cash taxes. That loophole creates a source of float — an interest-free loan, if you will, that Berkshire may invest. When analyst Jonathan Brandt asked whether it might prove to be an enduring source of float, Buffett demurred.

I’ll respectfully disagree. To the extent that Buffett and Berkshire continue to invest in the regulated utilities, the float generated by this tax treatment can be sustained and grow. And it could be quite substantial.

In the time since Berkshire’s 2010 acquisition of Burlington Northern Santa Fe, it’s increased more than $10 billion. They currently sit near $35 billion, where float is $80 billion. I don’t think it’s impossible to contemplate that Berkshire’s deferred tax liabilities from the regulated utilities could more than double across the next 10 to 15 years, providing a meaningful and heretofore underappreciated source of investable funds.

So why would Buffett play coy or downplay the potential? Simple. He’s hedging. Acknowledging as much — that he’s exploiting the tax code — risks killing a golden goose. Always fear the taxman.

Much has been made of the threat from alternative energy to MidAmerican Energy and, specifically, distributed power generation. The concern is that power served off the grid, via solar power, might disintermediate traditional power generation. As solar and distributed power become viable options, regulated utilities have two options — to adapt to changing climes, by implementing distributable power-generation technologies and/or pushing power costs lower, or fight and possibly lose.

For MidAmerican, a cash cow for Berkshire, that could prove to be a risk. But in CEO Greg Abel’s remarks, I found cause for optimism. MidAmerican has for years been actively transitioning its power-generation fleet to solar and wind applications, in an effort to drive costs lower. In his remarks, Abel seemed quite willing to explore any and all economic options.

In an otherwise staid industry, this is not a CEO who fears change. I expect that will accrue to MidAmerican and Berkshire’s advantage.

Charlie Munger — Buffett’s partner, with an acerbic and incisive wit, and a lover of knowledge accrual — is well known for his pithy, illuminating one-liners. No recount would be complete without them, and a few hit home.

On account of the growing importance of the regulated utility businesses, my (perhaps flawed) belief that the float from these businesses will assume increasing importance, and the semi-continuous accolades he’s a recipient of, I’d peg Greg Abel for the CEO spot. Dark-horse candidate: Matt Rose, CEO of BNSF.

And to Munger’s exhortation on getting smarter, I don’t think we left dumber. If there are three rules of engagement my years of Berkshire shareholding have reinforced, they’re simultaneously simple and hard to practice: Be contrarian, disciplined, and curious. In that regard, I guess you might say that I’ve emerged enriched not only financially, but also intrinsically.