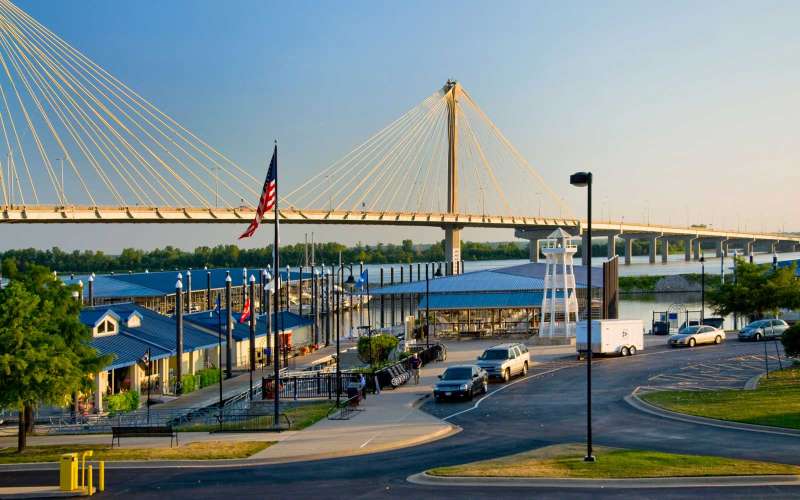 The American Dream doesn’t boil down to living outside of your means in big cities with soaring housing costs, tiny spaces, and $15 cocktails. It doesn’t have to be a choice between opportunity or obsoletion, between culture or cornfields.

In its June–July issue, AARP The Magazine features 10 towns across the U.S. that you can call home for less than $40,000 a year. To create the list, the magazine took a different approach than in previous years, considering key livability factors like median housing price and accessibility to larger cities as well as more subjective characterizations like general vibe.

The main takeaway: Easy living doesn’t mean giving up the great outdoors or big cities; it means embracing them both — within reasonable proximity.

Read on to discover 10 U.S. cities where the good life is within reach, according to AARP.

It’s hard to find city comforts, natural wiles, and vibrant culture all in one place — unless you’re in San Marcos. This old Texas town benefits from nearby Austin and San Antonio (it’s less than an hour from each) and finds character in its Hispanic heritage and musical roots (check out Float Fest, a music festival on the river). Texas State University students and full-time residents alike are tempted outdoors year-round with more than 1,200 acres of parks to explore, while the consistently 72-degree waters of the San Marcos River are ready for swimming, SUPing, and tubing no matter the season.

Freebies that count: Concerts take place in the park every Thursday during the summer.

At the confluence of the Mississippi and Illinois rivers, Alton is saturated with the rich antebellum history typical of Southern cities, from an Underground Railroad station to Civil War sites visited by Lincoln himself. Particularly popular with bird watchers, it’s home to the largest state park in Illinois, which is a wonderland for anglers, climbers, and hikers. And because Alton is only 25 miles northeast of St. Louis, you’re never far from an international airport when the travel bug bites.

Best way to spend $10: Grab a beer and a $3.99 Hot Chick on a Stick at legendary Fast Eddie’s Bon Air roadhouse, with live music nightly.

Life is picture-perfect in Upstate New York’s Canandaigua. Throughout the warmer months, residents enjoy the eponymous lake on which the city sits and all the boozy (and foodie) benefits of the adjacent Finger Lakes wine region. Come winter, adrenaline junkies take advantage of an average of 66 inches of annual snowfall, which only makes the historic downtown and 19th-century Queen Anne homes more photogenic. There’s a big focus on local here, as evidenced by New York Kitchen, a joint-effort nonprofit restaurant and learning space that supports the area’s culinary arts — of which there are many to explore.

Freebies that count: Check out the pioneer-kitchen exhibit at the Ontario County Historical Museum.

Though an Atlanta suburb may seem an unlikely culinary destination, Duluth is just that, due in no small part to the city’s diverse population. The Parsons Alley development project has become a hotbed of creative energy, in the form of delectable eateries, cool retail spaces, and public spaces. Plus, there’s no shortage of urban adventuring: The Town Green lights up in summer with free concerts and al fresco film screening, while the Infinite Energy Arena hosts major concert tours (hello, Beyoncé and Paul McCartney!) and gives sports fans something to cheer for as home to minor league hockey’s Atlanta Gladiators and the National Lacrosse League’s Atlanta Swarm.

Freebies that count: See the galleries at the Jacqueline Casey Hudgens Center for Art & Learning. The center also offers classes, including traditional Korean pottery, calligraphy, and soapmaking, at reasonable prices.

Best way to spend $10: Head to Crave Pie Studio for a serving of coconut cream or seasonal peach.

Nestled comfortably in the Oregon wine country and between the Cascades and coast, McMinnville spoils residents with more than 200 nearby wineries, ample farm-to-fork dining, and a historic downtown that’s been awarded one of the best Main Streets in America (complete with some 20 walkable craft breweries). It’s only about an hour from Portland or Salem, but with an annual UFO Festival and Turkey Rama carnival, McMinnville retains all the quirk of a small town.

Freebies that count: Picnic on the green at Linfield College and soak in the summer concerts. People 65-plus can audit classes for no charge.

Best way to spend $10: Have a pint and some popcorn at the Bitter Monk. (For a $1 donation, compete in an adult spelling bee.)

A borough built on the success of steel magnate Andrew Carnegie, Munhall is just seven miles from Pittsburgh, but the only hustle and bustle you’ll find here is The Waterfront development on the Monongahela River, where apartments meet urban-casual fare and shopping. But the gem of Munhall is the Carnegie Library of Homestead, a spectacular community meeting place built in 1898 that serves at once as library, athletic club, and music and performance hall that attracts talent like Jeff Goldblum, Josh Ritter, and Switchfoot.

Freebies that count: Pedal on to the Great Allegheny Passage, the 150-mile path connecting Pittsburgh to Washington, D.C.

Gulfport touts itself as a small town with a big heart, ready to accept newcomers with a warm greeting. A waterfront village filled with independently owned and operated businesses, Gulfport sits pretty on an aquatic preserve with colorful beach houses and an even more colorful tightly knit community. Residents turn out for the weekly farmers market and twice-monthly art walks along Beach Boulevard, but there are quiet moments to be had as well, lounging on the white sand beach, lazing under the Spanish moss hanging from old oaks, or kayaking the calm waters of Clam Bayou.

Best way to spend $10: Find the nun-clad windows at Stella’s and settle in for breakfast and bloodies

Welcome to the Wild West! In Guthrie, just 30 miles north of Oklahoma City, visions of a cowboy-culture past live on in beautifully maintained Victorian buildings, the historic trolley that shuttles around town, and regular Old West reenactments. It’s also home to the annual Oklahoma International Bluegrass Festival, an active arts and entertainment scene, and a host of museums.

Vibe: Postcards from the Wild West

Great minds flock to Coralville, which abuts the University of Iowa in Iowa City. Here you’ll find walkable public spaces, like the Iowa River Landing, a former industrial zone turned 180-acre mixed-use development that’s now the hub of Coralville activity, with the Iowa Arena slated for completion next year. At nearby Coralville Lake, hundreds of campsites fill every summer with beach goers, boaters, and explorers eager to find fossils in the 375-million-year-old Devonian ocean floor, exposed after flood waters receded in the 1990s.

The Pacific Northwest has a secret — and it’s in Idaho. The sparkling town of Coeur d’Alene, just 35 minutes east of Spokane, Washington, is rich in natural gifts. Winter dusts the mountains in picture-perfect snow, which melts into roaring rapids in time for spring blooms and rafting adventures, while long summer days are filled with festivals that set the scene for cozy autumnal afternoons curled up with local brew. The town’s namesake lake, dubbed one of the most beautiful alpine lakes in the world, has 135 miles of shoreline — plenty for you to explore at leisure.