This Is the Best College in Every State 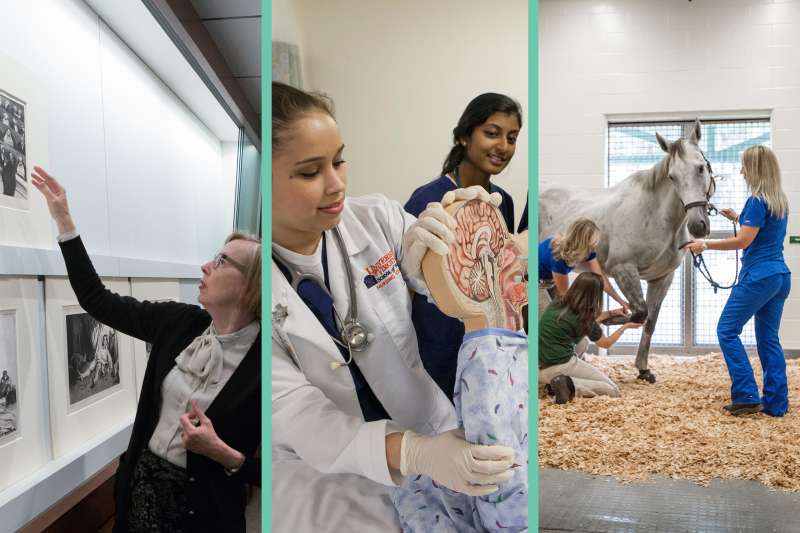 Where you live has a big impact on your financial life. That’s just as true for where go to college as where you make your career.

The majority of college students attend public institutions not far from their home. In fact, more than half of freshmen at four-year colleges go to a school within 100 miles of where they went to high school, according to an annual survey of freshmen from the Higher Education Research Institute at the University of California-Los Angeles.

That’s why every year, after digging through pricing data and student outcomes to find the colleges that provide the best value for your tuition dollars, Money reworks our list in a state-by-state order. These are the highest-ranking colleges in every state, with the exception of Alaska and New Mexico. No four-year colleges in those two states made our initial quality screenings of having a higher than average graduation rate.

Engineering is one of the more popular majors at Auburn, and the university boasts an impressive number of alumni who went on to be NASA astronauts (only a couple colleges and the national service academies have more). Auburn’s astronauts include Kathryn Thornton, the second American woman to walk in space. Full profile.

Alaska – Not included in our ranking.

Read about our rankings methodology here.

Flandrau Science Center and Planetarium on campus of the University of Arizona.
Richard Cummins—Getty Images

Athletics are a big part of campus culture at the University of Arizona, where hardcore sports fans can join the university’s ZonaZoo, an official student cheering section which has twice been voted the country’s student section of the year. Full profile.

About 50% of students get merit grants at this small Christian college in northwest Arkansas. The average award is nearly $15,000, according to data from Peterson’s. Full profile.

Photographed for Money by Kyle Grillot

The first public university to top Money’s annual rankings, UC-Irvine is a young school—it was founded in 1965— that has made a name for itself as a respected research institution with a diverse population of students. Money estimates UCI’s graduation rate is about 30% higher than colleges that serve similar students. Full profile.

A favorite campus tradition at this small public colleges is E-Days (or Engineering Days), which takes place every spring and includes a cardboard boat race in a Colorado river. Full profile.

Thanks in part to its large endowment and resulting generous aid packages, nearly 9 in 10 students at Yale graduate without student debt. Full profile.

The University of Delaware places high in Money’s rankings in part because of its affordability, coming in at under $100,000 for the net price of a degree. Full profile.

Courtesy of University of Florida

The University of Florida is one of the best bargains in higher education. Tuition is about $6,400 a year for Floridians, and 70% of undergraduates get some type of financial aid. Full profile.

Recent graduates of Georgia Tech report average salaries of more than $70,000, according to Payscale — that’s the highest of any public college in Money’s database. Full profile.

Hawaii – #461 University of Hawaii at Manoa

No surprises here: Students say one of the best things about attending the University of Hawaii at Manoa is its location — tropical, lush, and near the beach. They also brag about the friendly, diverse student body. Full profile.

Popular areas of study at the University of Idaho include agriculture, business, engineering, and conservation. Full profile.

Illinois – #20 University of Illinois at Urbana-Champaign

Generations of students at UIUC have rubbed the nose on a campus bust of Abraham Lincoln for good luck before exams. Full profile.

Iowa State stands out for its comparatively low price of a degree. At an estimated $70,700 cost for in-state students, it’s one of the most affordable state schools in Money’s rankings. Full profile.

Berea doesn’t charge tuition — all students work a minimum of 10 hours a week to help pay their way. And the college awards grants and scholarships to students who need help covering room and board. At the end of their college careers, students leave with a labor transcript along with a degree. Full profile.

School pride is serious at LSU. The university’s mascot, Mike the Tiger, is a live tiger donated from a rescue facility. He lives in a habitat on campus that includes a 14,000-square-foot yard. Full profile.

A small liberal arts college, Bates boasts a graduation rate that Money estimates is about 25% better than expected based on students with similar test scores and economic backgrounds. Full profile.

Courtesy of University of Maryland-College Park

Courtesy of Massachusetts Institute of Technology

MIT attracts some of the world’s brightest minds to its classrooms and research labs. Members of the MIT community have won a combined 90 Nobel Prizes, and there are 10 Nobel laureates currently on faculty or staff. Full profile.

Courtesy of University of Michigan-Ann Arbor

The University of Michigan is one of the country’s premiere public institutions, and that helps explain why it draws undergraduates from all over. Just over half of students are from Michigan and about 40% are out-of-staters. Full profile.

The University of Minnesota prides itself on its reputation for research. One of its more fun claims to fame is developing the Honeycrisp apple, along with several other apple varieties. Full profile.

The most popular programs of study at this private Christian college include biology, business, elementary education, and psychology. Full profile.

Academics are rigorous at this private research university. Students say that As are elusive and competition fierce. The hard work pays off: Recent grads report salaries that are slightly higher than universities that offer a similar mix of academic programs. Full profile.

Nine in 10 students get grants to help bring down the price of attending this private Catholic college. The average merit grant is about $14,000. Full profile.

Nebraska – #384 University of Nebraska at Kearney

Greek life and outdoor recreation are popular at this Ivy League campus. About half of students join a fraternity or sorority, and the college’s Outing Club is the oldest such group in the country. Full profile.

At 97%, Princeton’s graduation rate is tied with Yale’s for the highest in the country. Full profile.

New Mexico – Not included in our ranking.

Read about our rankings methodology here.

Photographed for Money by Jennifer Lavelle.

Baruch stands out for its affordability and accessibility. About 45% of students are considered low-income, and the college has one of the country’s highest scores for socioeconomic mobility. Full profile.

Popular majors at Duke include computer science, economics, and public policy, and about half of students work on research projects alongside faculty members. Full profile.

True to its land-grant heritage, agriculture and animal sciences remain two of the most popular academic programs at North Dakota State, alongside business, nursing, and engineering. Full profile.

One of the biggest universities in the nation as well as one of the proudest, Ohio State has about 45,000 undergraduate students. Sports is a huge part of campus culture, particularly cheering on the Buckeyes football players. Full profile.

OSU says its annual homecoming celebrations are one-of-a-kind. Founded back in 1913 as a small harvest festival, today the event draws in tens of thousands of alumni from around the country. Full profile.

Located on a bluff that overlooks the Willamette River on the outskirts of the city, the University of Portland doesn’t feel like an urban campus but it still offers all the advantages of one. Full profile.

Penn diplomas are valued on the job market: Recent graduates report earning an average $70,100 within three years, about 9% higher than peers from similar schools. Full profile.

Brown gives students ample academic freedom. As long as students take two required writing classes, they can choose whatever courses they like and can design their own concentrations. Full profile.

You might know of Clemson thanks to its recent dominance in college football, but the university can also claim some impressive academic stats. Its graduation rate is nearly 10% higher than colleges that enroll students with similar test scores and income levels. Full profile.

One of the oldest and largest universities in the state, South Dakota State University offers more than 80 majors, with popular ones including agriculture, wildlife management, economics, and pharmacy. Full profile.

Athletics is a vibrant element of campus culture here. Many students participate in team and club sports, and Aggies football fans have long called themselves “the 12th Man” to symbolize their readiness to jump onto the football field if needed. Full profile.

BYU-Provo is the main campus of a private college system that specializes in educating members of the Church of Jesus Christ of Latter-day Saints. It stands out in Money’s rankings for a competitive price — the estimated net price of a degree at BYU is less than $90,000. Full profile.

If you enjoy winter, the University of Vermont’s location is hard to beat: The campus is in the charming city of Burlington, near the Green Mountains and with views of Lake Champlain. One in four Burlington residents is college-aged, thanks largely to UVM and nearby Champlain College. Full profile.

Courtesy of University of Virginia

Known as a “public Ivy,” the University of Virginia’s impressive 95% graduation rate is on par with the actual Ivy League institutions. Full profile.

Students walk between classes near blooming cherry trees on the University of Washington campus, in Seattle. - 03 Apr 2019
Ted S Warren/AP/Shutterstock—

UW has made a name for itself as a leading research institution. Because of its proximity to Boeing’s manufacturing facilities, the school has a particular expertise in aeronautics. But that’s not all, its Seattle location helps it maintain close ties with many software and technology firms including Amazon and Microsoft. Full profile.

A few years after the discovery of DNA analysis, WVU launched a forensic science program as part of a small partnership with the FBI. Today, it’s the only university in the country offering a bachelor of science, master of science and PhD in forensic science. Full profile.

Students at UW-Madison have more than 9,000 courses and 230 academic programs to choose from, plus hundreds of clubs and an active athletics program to keep them busy. Even as its made a name for itself as one of the top public colleges in the country, UW-Madison still admits more than half of applicants. Full profile.

Along with the typical lecture halls, labs, and dormitories, the University of Wyoming’s campus is home to multiple museums, including the American Heritage Center and UW Geological Museum, as well as Prexy’s Pasture, a grassy, quad-like park, protected by state law from being built on. Full profile.

This post has been updated to replace the photo under Oklahoma, which originally displayed a photo of the University of Oklahoma instead of Oklahoma State University.