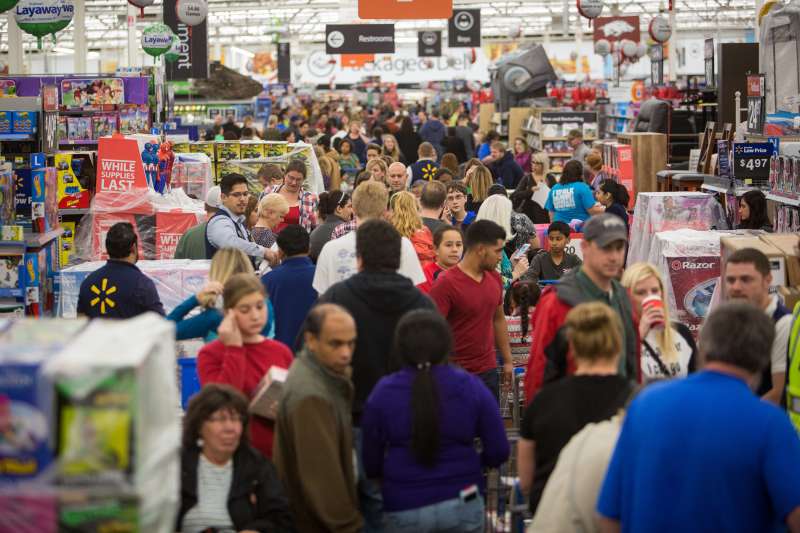 Customers at Walmart on Black Friday 2015.
Gunnar Rathbun—Invision for Walmart/AP

The online ads and print circulars heralding Black Friday and Cyber Monday deals were loaded with promotions of 40% and 50% off. Heck, some research indicates that the average Black Friday discount at J.C. Penney and Kohl’s was over 66%.

Ultimately, though, those figures are misleading. While they may indeed represent the markdown from an item’s “original price,” in many cases these original or list prices are fake: They’re inflated to make the inevitable discounts seem more impressive.

It’s not like Gap or Kohl’s or Macy’s were offering everything at full price one day, and then slashed prices across the board the next. Thanks to the constant expansion of the holiday shopping season and the overarching push to a retail world when everything’s always on sale and almost no one ever pays full price, there were abundant sales available before marquee shopping days like Thanksgiving, Black Friday, and Cyber Monday—and there will surely be big sales in the days that follow.

A better gauge of the true discounts on Black Friday and Cyber Monday, then, would be a comparison of prices for the same items in the days before Thanksgiving. This is essentially what the retail solutions firm Boomerang Commerce just did with a select group of stores known for competitive prices. After gathering prices for 1,000 popular products from Amazon, Walmart, Target, and Jet.com, the gist of Boomerang’s research can be summed up thusly:

Of course, there were some phenomenal doorbuster deals featuring remarkably cheap prices over the past weekend. But by and large, these deals were the exceptions. It was far more likely that prices for popular products dipped only slightly or remained pretty much the same over the 10 or so days culminating in Cyber Monday.

For Amazon, Boomerang Commerce estimates, “the average discount across prices was 2.5% or less for the entire shopping period.” Walmart’s average discount was 3.6% or less, while “Target showed the deepest discounts on average price across items, with 6.8% or less from the day before Thanksgiving through the day after Black Friday.” Bear in mind this doesn’t mean that Target necessarily had the best prices. It’s easy for a retailer to have the biggest discounts if it had the highest prices to begin with.

While the data may be surprising to those who assume Black Friday offers big savings across the board, Boomerang’s research is similar to previous reports. During the 2014 holiday season, for instance, one study estimated that the average discount on Black Friday was only 5%.

More and more shoppers seem to grasp that Black Friday is becoming meaningless. In one recent survey, from Ibotta, 65% of shoppers said they “believe Black Friday is not as big of a deal as it used to be,” and half thought that the truly best deals would be available after Black Friday had passed.

Given the underwhelming discounts, and the increased understanding among consumers that there will be good deals before, during, and after Black Friday, it shouldn’t come as a surprise that sales were down on Black Friday 2015.