Bitcoin and Other Cryptocurrencies Are Plunging. Here's What Could Happen Next 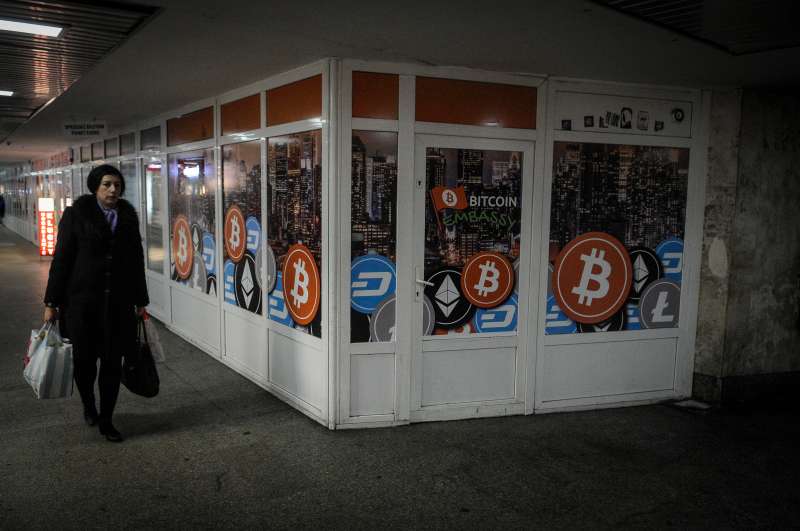 A bitcoin embassy is seen in an underpass in Bydgoszcz, Poland on December 14, 2017.
Jaap Arriens/NurPhoto—NurPhoto via Getty Images

While a “Santa Claus” rally appears to be underway in the stock market, cryptocurrencies just got a visit from the Grinch.

Bitcoin and virtually all of its major rivals saw their prices plunge Friday, as the cryptocurrency bubble appears to be bursting.

Bitcoin prices sank from around $16,000 on Thursday to below $10,900 early Friday morning, before recovering somewhat to $12,000. Since peaking near $20,000 at the start of the week, the world’s largest cryptocurrency has lost around 40% of its value.

Rival Ethereum saw the price of an ether token slip from as high as $793 on Thursday to as low as $491 Friday morning, before bouncing back to around $600. Even with the rebound, the digital currency was still down more than 20% for the day. The same goes for Litecoin (down 20%) and Ripple (down 18%).

The bullish take: This could be profit-taking among really short-term investors who just recently bet on cryptocurrencies to turn a quick profit.

“We see the exit of short-term speculators and we have seen it before,” Michael Jackson, partner at venture capital firm Mangrove Capital Partners, told CNBC. “The vast majority of long-term holders of bitcoin are still way in the money and have shown no sign of cashing out.”

While it’s true that pullbacks can be a healthy thing for market rallies in general — as they drive out buyers with weak conviction, leaving a stronger base of “true believers” — that’s not likely to happen here. In fact, you should expect even more volatility and sell-offs going forward.

Why? This week’s plunge in most of the major digital currencies coincides with the start of widespread trading in bitcoin futures contracts on the Chicago Mercantile Exchange, the world’s largest futures exchange.

This means that for the first time, investors can bet on and against bitcoin prices, creating a potential downdraft for bitcoin. (Bitcoin futures on the CME were also down around 15% on Friday).

What’s more, the growing popularity of cryptocurrencies in general is attracting a different type of investor.

In the early stages of the cryptocurrency boom, most investors were true believers who either intended to use bitcoin as currency (and therefore had a vested interest in its appreciation) or were buying the currencies for short-term gains (and were also rooting for rising prices).

Now, a wider audience is being drawn in, including institutional investors who stand to profit whether bitcoin prices go up or down.

Just this morning, Bloomberg reported that the investment bank Goldman Sachs plans to set up a cryptocurrency trading desk. Other major banks and hedge funds are likely to follow suit, creating an entirely new class of investors who don’t care if prices fall as long as they’re on the right side of the trade.

Meanwhile, as the nature of cryptocurrency demand changes, supply is growing. Bitcoin is no longer the only major player in this space. Ethereum, Ripple, Litecoin, IOTA, Cardano, Dash are all gaining traction. More supply thanks to this so-called Alt-coin boom means that even a slight drop off in demand could bring prices down going forward.

What Does the Crash in Cryptocurrencies Mean?

It shows that bitcoin and its rivals aren’t actually currencies, so much as they are investments.

In fact, the Internal Revenue Service classifies bitcoin as “property,” meaning it’s subject to capital gains taxes like stocks are.

For now, investors should consider these cryptos in much the same way.

What makes a currency a currency is that it can be used effectively and efficiently for financial transactions and that it’s a reliable “store of value.”

The fact that bitcoin’s value surged nearly 20 fold between the start of the year and last week — and then fell 40% last week — shows it doesn’t fit the latter definition.

As for the former, when’s the last time you really bought anything with a bitcoin, or an ether, or Ripple’s XRP token?