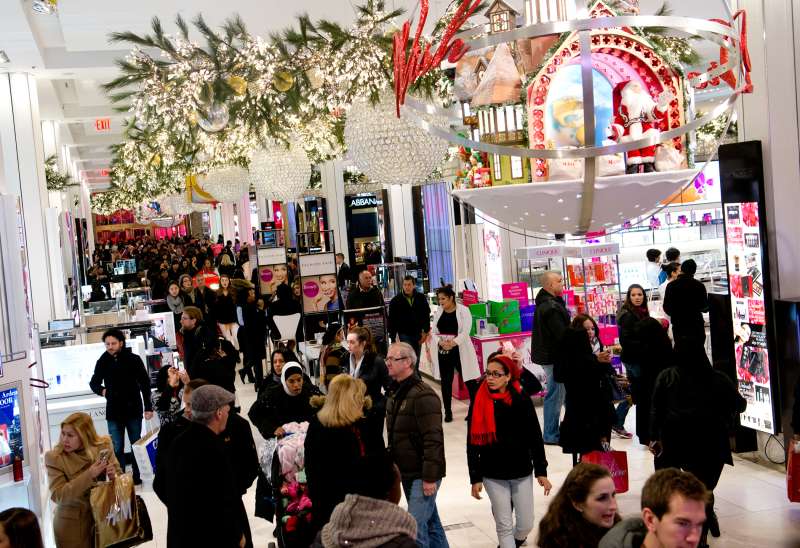 We know: The neighborhoods are still decorated in pumpkins, ghosts, and ghouls, houses are clogged with uneaten trick-or-treat candy, and there hasn’t been a sniff of snow in the air. Nonetheless, thanks to the relentlessness of Christmas creep, retailers are moving on past Halloween this weekend in a big way, and they want shoppers to come along for the ride. Here’s what shoppers can expect in the days ahead.

Early Season Deals
Like last year, retailers have decided that as soon as Halloween is over, it’s time to kick off big holiday sales. Walmart announced this week that Sunday, November 1, will mark the starting date of “eight weeks of deep savings and holiday retailtainment.” (Yes, that’s the “word” they used—”retailtainment.”) What’s more, instead of the standard-issue short-lived, limited-quantity deals used to get shoppers to act quickly or risk losing out, Walmart is promising fewer “this weekend only” sales, as well as a broad selection of special “Rollback” prices that will be in effect at least 90 days. One of the most enticing deals offered by Walmart as of Sunday is a rare discount on Apple electronics—the iPad mini 2 will be priced at $199, down from $268.

Target is also launching major sales initiatives starting November 1. Among them, users of its Cartwheel app will get 25% or more off hundreds of items, and each day from November 1 through December 24, a different toy will be discounted by 50%. Speaking of toys, Amazon, Kmart, and Toys R Us all introduced their “hot toy” lists weeks ago, and flash sales and periodic promotions have already begun popping up.

Free Shipping
Both Best Buy and Target are offering free shipping on all purchases, no minimum purchase required, for the duration of the holiday season (ending January 2 at Best Buy, December 25 at Target). Providing free shipping can be costly for retailers, especially on smaller purchases (hence minimum-purchase requirements), but shoppers have come to expect someone else to pick up the tab for the delivery of online orders. Call it one of the broad effects of Amazon Prime on consumer behavior and the retail industry overall. More retailers are likely to follow the lead of Best Buy and Target with free, no-minimum shipping (free returns too), if not for the entire holiday season then surely via periodic promotions.

Extra Easy Store Pickup
Walmart has decided against free, no-minimum-purchase shipping, and is instead sticking with a $50 purchase threshold that shoppers must meet before getting free delivery. But Walmart hopes to boost online orders anyway with a new mobile check-in feature with its smartphone app. Shoppers who have placed orders in advance for in-store pickup can check in as soon as they enter the store, alerting employees to get orders ready and speed the process along. Target, meanwhile, is expanding its partnership with Curbside to 121 stores. The service allows shoppers to make online purchases and pick up orders “curbside” without ever having to leave vehicles.

Incredible Online Sales Growth
The consensus holds that sales will increase dramatically on Thanksgiving and Black Friday this year, but not in the way you’re thinking. While sales made in physical stores have been underwhelming in recent years (especially on Black Friday), e-retail sales have experienced consistently strong growth. For the 2015 season, Adobe is predicting that online shopping purchases will increase 15% and 18% year over year on Black Friday and Thanksgiving, respectively, while sales on Cyber Monday, the biggest day of the year for e-retail, will grow by a more modest 12%. This shouldn’t come as a surprise given that more and more online deals have become available on Thanksgiving and Black Friday. The Adobe analysis also indicates that Thanksgiving Day will feature the lowest online prices of the year, with an average discount of 26%.

According to one analysis conducted after the 2014 holidays, in-store foot traffic sales fell 8% compared to the previous year, while overall sales were up roughly 4% because of a sharp increase in online purchases, as well as a rise in purchases made by the average in-store shopper. We can expect more of the same this year: The National Retail Federation is forecasting overall holiday sales to rise by 3.7% this year, with online sales growth far outpacing the rise in brick-and-mortar sales (assuming there is any rise). It should be noted that while the online sales category is growing much faster than brick-and-mortar, the latter still captures the vast majority of holiday sales and will continue to do so for the foreseeable future.

Holiday Store Hours vs. Family Time
The controversy over Thanksgiving shopping will continue on into the 2015 season, with some retailers making a big show of their decisions to remain closed and others pumping up their best Turkey Day deals. Macy’s falls into the latter category, announcing this week that most stores will open with doorbusters aplenty at 6 p.m. on Thanksgiving night. Walmart, Target, Best Buy, Toys R Us, Sears, Kmart, J.C. Penney, and many other big-box retailers haven’t gone public with their Thanksgiving plans, but it would be surprising if any decided to simply stay closed.

Staples is one of the national stores that was open on Thanksgiving last year but is staying closed on the holiday this year. (Many other chains, including Home Depot, Lowe’s, Costco, GameStop, and Nordstrom will also be closed on Thanksgiving 2015, but they were closed last Thanksgiving too.) The decision to stay closed on Thanksgiving is generally portrayed as an appeal to families—of consumers and store employees alike—in sharp distinction to the crass, consumerist, profit-driven motives behind opening on the day traditionally reserved for relaxed family time. “We want our customers and associates to enjoy Thanksgiving their own way,” Staples announced of its decision to close.

One of the most surprising decisions shoppers are likely to see this season was REI’s bold call to stay closed not only on Thanksgiving, but Black Friday as well. While this move is obviously going to hurt REI sales during Thanksgiving weekend, the family-friendly strategy could very well win the outdoors specialty retailer fans (and dollars) later in the holiday season—and perhaps for years to come.