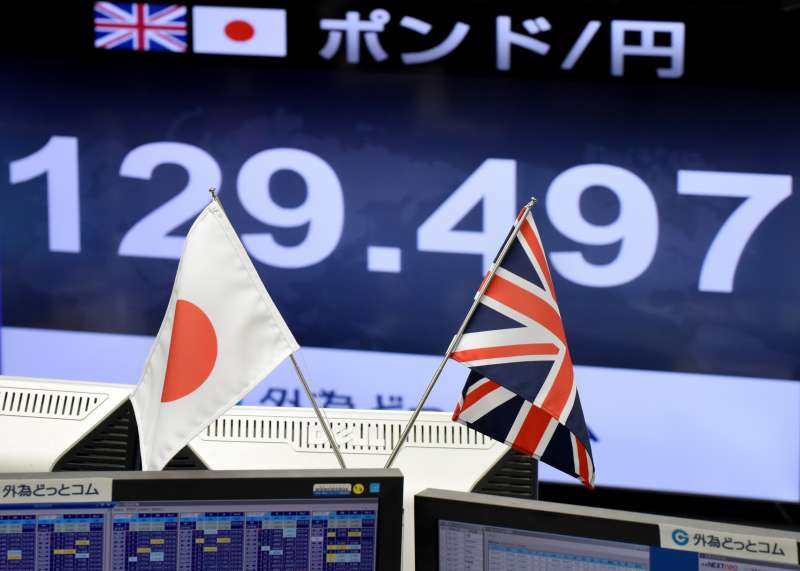 Japanese and British flags are placed in front of a monitor showing the Japanese yen rate against the British pound at a brokerage in Tokyo on October 7, 2016. The pound suffered a "flash crash" in Asia on a computer-generated sell-off in the beleaguered currency, as tough talk from French President Francois Hollande underscored the perils ahead for Brexit-bound Britain.
TORU YAMANAKA—AFP/Getty Images

Sterling lost as much as 10% of its value in just a few minutes of Asian trading on Friday, a “flash crash” that fueled concerns about the vulnerability of the British currency while adding to the allure of the country’s corporate sector.The pound recovered from the fall, which took it as low as $1.1491 and was driven, dealers said, by the automated algorithmic computer trades that now dominate the global foreign exchange market.

But selling by European and U.S. investors quashed any bounce as first London and New York came on line, driving a 2.5 percent loss on the day and putting sterling on course for its biggest weekly fall since 2009.

That all sounded like good news to investors in internationally focused UK firms, which gain on overseas revenues and competitiveness every time the currency falls. The FTSE 100 index rose 0.8 percent while other European stock markets fell sharply.

But sterling’s tumble added to pressure on UK government bonds, pushing 10-year gilt yields as much as 11 basis points higher. Yields of 0.984 percent were the highest since the week of the Brexit referendum in June.

“We can dismiss what happened in Asia, but the bias for sterling’s performance remains downward,” said Neil Mellor, a currency strategist with Bank of New York Mellon in London.

“The speech by (Prime Minister Theresa) May this week thrust the prospect of a ‘hard’ Brexit upon the market. The fact is that the bias to the downside is going to remain there until we see some details from the negotiating table.”

Sterling has been falling steadily for a fortnight, as investors fret that the government’s intention to prioritise immigration controls over access to the single market in exit talks will spark deeper cuts to foreign investment in Britain.

Major custodial banks and asset managers say pension funds and other long-term fund investors have responded by buying UK shares and other assets while hedging the currency risk through options and other derivatives that allow them to sell the pound.

The worry is that at some stage the broader political and economic concerns that are afflicting sterling begin to bleed into a more general sell-off of British assets.

Measures of implied market volatility surged to more than 10 percent for durations out to a year — effectively making it far more expensive for asset managers to hedge the currency exposure of investing in British stocks or bonds.

“The combination of collapsing currency and concerns about fading monetary support for the UK asset markets could stoke fears about a balance of payments crisis and a disorderly selloff in the pound,” Credit Agricole analysts said in a note.

The pound was also down by more than 2 percent at 90.23 pence per euro, its lowest in almost seven years after moves overnight that mirrored those against the dollar.

The crash in the pound sent sterling-denominated gold to its highest since mid-July at 1,059.06 pounds an ounce overnight, despite a near 5 percent drop in spot gold prices this week. Gold tends to be a refuge for investors in times of market stress as well as a hedge against future inflation.

Data from the International Monetary Fund suggests that 4.69 percent of central banks’ foreign exchange reserves are in British pounds, behind only those in euros and dollars.

The fear that the value of returns on those assets will be eroded steadily by inflation showed up in pricing of forward interest rate swap agreements, which rose to imply a rise in long-term inflation to 3.64 percent.

The FTSE 250 midcap index, which contains more domestically focused companies exposed to a rise in the cost of imports, fell 0.5 percent.

Before Friday’s events, forecasts for the bottom of the pound‘s fall had generally centred around $1.20-1.25, with the caveat that there is no technical support between there and all-time lows just above parity with the dollar.

HSBC strategist David Bloom forecast a fall to $1.10 by the end of next year.

“Sterling used to be a relatively simple currency that used to trade on cyclical events and data, but now it has become a political and structural currency,” he said.

“This is a recipe for weakness given its twin (budget and current account) deficits. The currency is now the de facto official opposition to the government’s policies.”