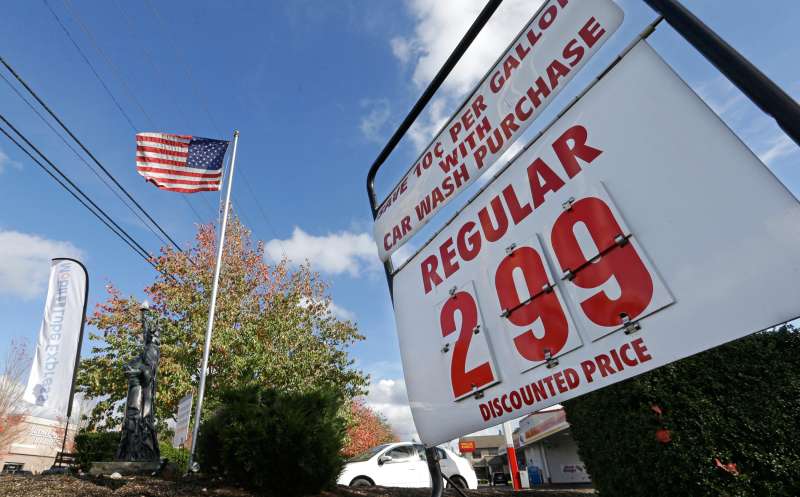 An American flag flies at a gas station advertising a discounted price for gas at $2.99 per gallon, with the purchase of a car wash, October 29, 2014, in Lynnwood, Washington.
Elaine Thompson—AP

Last year on Halloween, AAA forecast something that was nearly unthinkable a few months before: Within a day, the average price of gas nationwide would drop below $3. If that happened—and we all now know it did—it would be the first time since 2010 that we dipped under the $3 mark.

At that point, prices had already fallen 70¢ from the 2014 high, and “many Americans are spending $10-$20 less to fill up the cars on every trip to the gas station compared to what they paid during the summer driving season,” Bob Darbelnet, the CEO of AAA, said in a press release. Still, Darbelnet then cautioned, “It is possible that lower gas prices will soon be a faded memory, so enjoy it while you can. The days of paying more than $3.00 per gallon for gas have regrettably not gone away.”

In fact, $3+ gas has gone away for much of the country during the past 12 months. Prices kept falling at a clip of nearly 1¢ per day through the end of 2014, and by early 2015, the national average stood at around $2.10. Very quickly, drivers became unimpressed with gas prices merely a little under $3, and it took sub-$2 prices to get our attention.

Prices ebbed and flowed through much of 2015, hitting $2.75 in late May—which somehow seemed expensive, even though it was nearly $1 cheaper than 12 months prior—before retreating in late summer. As of today, the average is $2.19 nationally, according to AAA. After almost a full year of sub-$2 gas prices, it’s easy to take such prices for granted. But let’s take a moment to reckon that the current price is nearly one-third less than the national average around Halloween 2014.

AAA data indicates that Americans collectively saved $14 billion in fuel costs in 2014, when the average was $3.34, compared to the year before. That saved the average driver $115 in gas. In 2015, it’s been estimated that Americans saved more than $1 billion ($15 to $25 per fill-up) on Labor Day weekend alone. Depending on how much you drive (and what you drive), you will probably save somewhere between $750 and $1,000 on fuel costs this year compared to 2014.

Read next: 23 Ways to Slash Your Car Expenses