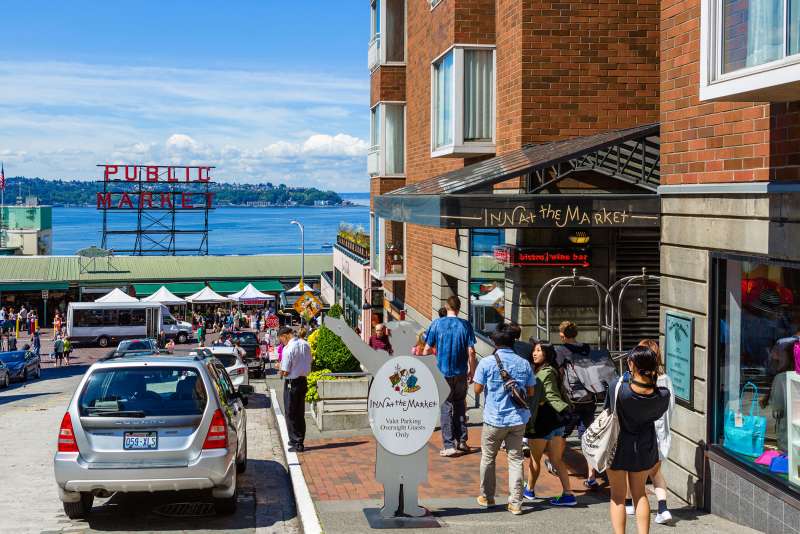 View down Pine Street of Pike Place Market with Inn at the Market in foreground, Seattle
Ian G. Dagnall—Alamy
By lauragoldstein2014

Young people may dream of working in New York or Los Angeles, and indeed some rankings include those cities high up in lists of best places for millennials.

But with costs of living far beyond what most Americans can afford—and projected job growth below average for big U.S. cities—it’s hard to make the case that either the Big Apple or City of Angels offers young people the easiest living or the best shot at success.

Instead, Money’s list of top cities for millennials focuses on places where job growth is projected to be above average; food, rent, and other necessities are relatively affordable; and there are high concentrations of grocery stores, pharmacies, laundromats, and other amenities. Additionally, the 5 following cities—ranked by their populations of 20- through 34-year-olds—offer loads of fun bars, restaurants, and leisure activities. Results are limited to cities population 300,000 and higher, and one city per state.—Susie Poppick

Take our quiz: What’s the best big city for you?

It will come as no surprise to many that the city known for being the “live music capital” tops our list of best places for people aged 20 to 34.

In addition to great quality of life and job opportunities, the metro is home to a 26.2% millennial population. And despite an ultra-reasonable rating of 101 on the cost of living index, Austin is chock full of fun activities, food, drink, and conveniences.

The cherry on top is that projected job growth through 2019 is a robust 13.3%—thanks in part to big tech and telecom employers like Dell, IBM, and AT&T.

The ATL has fun activities for people of all ages, including a popular zoo, an aquarium, and a collection of several impressive art and history museums.

But there’s also a great bar and nightlife scene that millennials—who comprise about 26.2% of the total population—might love. The cost of living is 114, below average for big cities on the index, and means neither groceries nor cocktails need to be too expensive.

In addition, Columbus is convenient—and surprisingly walkable—which means you don’t necessarily need a car to get around. Projected job growth is a healthy 9.3% through 2019, and the low cost of living—only 103 on the COLI index—makes it stand out among big cities.

Though it might seem sleepy to outsiders, Tucson is a bit of a hidden gem for millennials, thanks in part to a revitalized downtown, including a big new supermarket, and range of ethnic restaurants.

With a cost of living index of 105, well below the urban average of 117, the city is affordable on top of being accessible. Residents rave about Hotel Congress—known for being the place where 1930s bank robber John Dillinger’s hid out just prior to his arrest—where visitors can drink and dance late into the night.

The population of locals aged 20 through 34 is a considerable 24.4%. While some of those residents are students at the University of Arizona, others work in the city for employers like Raytheon. Career opportunities are a big draw in the city, where Moody’s projects job growth of about 11.1% over the next five years.

Boasting a millennial population of about 24.1%—a notch higher than the big-city average of 22.9%—Seattle’s vibrant nightlife and walkable conveniences help make 20- and 30-somethings feel right at home. In addition to being a great place for foodies and singles, Seattle is relatively affordable, particularly compared with other large West Coast metropolises.

Though Seattle scores a 120 on the cost of living scale (100 is average for the U.S., 117 is average for large cities, and San Francisco is a pricey 175), generous median incomes of nearly $67,000 per year—compared with the urban average of $50,787—help residents cover costs. And those looking to move to the urban tech center will find lots of opportunity: Moody’s projection for job growth in Seattle through 2019 is about 10.7%, above the big-city average of 9.3%.