The Next Round of Stimulus Checks Could (Finally) Include College Students 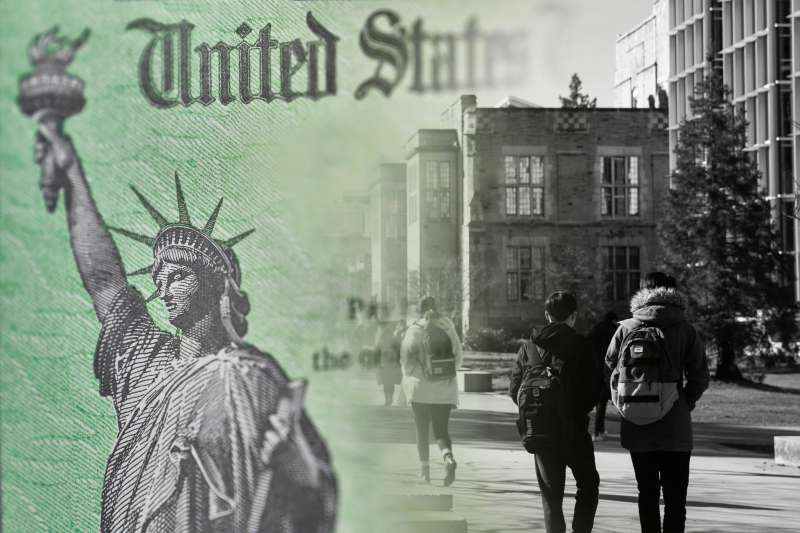 Emily Borchardt is hoping her fortunes have changed — at least by $1,400.

The University of Oregon senior welcomes President-elect Joe Biden’s announcement last week that he plans to extend eligibility for an additional $1,400 stimulus payment to adult dependents, including college students, as part of his $1.9 billion relief plan.

“That would take a huge weight off my dad’s and my shoulders, especially because I’m out of work and we’re not sure when [the economy] is gonna open up again,” she says.

The 21-year-old was barely getting by before the pandemic hit, balancing a full-time class load and multiple part-time jobs, until she was laid off in March. Since then, she’s struggled to pay her bills.

While most Americans have received two rounds of federal stimulus checks totaling $1,800, some dependents like Borchardt were left out of the pandemic relief payments completely. College students aged 18-24, along with other adult dependents and all 17-year-olds, were ineligible for the stimulus checks. Rough estimates indicate that more than 8 million undergraduate students missed out on the two stimulus checks due to their dependent status. Neither they, nor the parent or taxpayer who claimed them, received any money.

Young adults like Borchardt are hoping they won’t be overlooked for a third time when they too have suffered the economic fallout of the pandemic.

“If it got passed it would be relief for three months,” she said, adding that the money would tide her over until the spring. “But I also will say I don’t want to get my hopes up too high.”

She has reason to be skeptical. Biden’s proposed $1,400 payments aren’t a done deal. They still have to be passed by Congress. House Democrats passed bills with larger stimulus checks that would have included adult dependents twice in 2020, but they had little Republican support and died after the Senate didn’t take them up.

Now, a razor-thin majority in the Senate following the Georgia special elections earlier this month means the new administration may have to convince some Republican senators to support the measure. Joe Manchin, a Democratic senator from West Virginia, has previously expressed opposition to additional stimulus checks.

When Borchardt initially enrolled at University of Oregon, her dad was able to help her cover the costs of her education, but he was diagnosed with cancer during her second year of college. While he’s now in remission, he had to retire early and collect his pension. “Now he lives paycheck to paycheck from Social Security, and school and rent and groceries and everything in Eugene has just become increasingly hard to pay for,” Borchardt says.

Now she uses the campus food pantry and is concerned about her ability to pay her $700 a month rent and her out-of-state tuition. Borchardt did receive a CARES Act emergency grant through her university in the spring that helped with living expenses. But that money is gone, and she only received $20 when she applied for additional assistance in the fall.

It frustrates Borchardt that people seem to think that all college students live entirely off their parents’ money. “I’m a dependent, but I’m also making my own money to try to help (my dad) pay for things,” she said. “There is no option for me not to work.”

That’s not an uncommon experience. Less than 40% of undergraduates are “traditional students” who go directly to college after high school and are primarily supported by the parents, says Carrie Welton, policy director of the Hope Center for College, Community, and Justice at Temple University.

“The underlying assumption is that college students are still overwhelmingly dependent on their parents,” she says. But “this is a reflection of outdated perspectives about who students are.”

Welton says that the stimulus checks for college students would make a huge difference for low- and middle-income families. “Given the marginal utility of $1, we know that people with lower incomes are going to be able to derive more benefit and good from [these payments],” she says. “For student parents, students of color, first generation students, immigrant students — that amount of money can be the difference between them staying enrolled or dropping out of school.”

It’s unclear whether Biden’s proposed expansion to include adult dependents would only apply to the next round of stimulus checks or whether it could retroactively apply to the previous rounds. Regardless, there may be a path for college students to still access the previous two checks.

That’s because the stimulus payments, while initially based on 2019 tax returns, are actually applied to the 2020 tax year. So anyone who’d be eligible for the checks based on their 2020 income and filing status will get the money when they file their taxes this year — including young adults who are newly filing as independent.

The key is you can’t simply decide to be independent for tax purposes. You have to meet certain requirements, including earning more than $4,300 during the year and providing at least half of your financial support, says Ross Riskin, a tax professor at the American College of Financial Services.

“The reality is that many parents mistakenly claim their college-aged children as dependents when they shouldn’t be,” he says.

But you shouldn’t just jump blindly into filing as an independent simply to get the stimulus money. The question is whether that $1,800 is more than your parents would get through other deductions and credits by claiming you as a dependent. Those include tax benefits like the Child Tax Credit, Earned Income Tax Credit, and the American Opportunity Tax Credit, which is why Riskin says it’s best to consider the overall tax impact on the family rather than the stimulus check alone.

In a normal year, it generally makes the most financial sense for families to continue to claim college students as dependents, unless the parents are higher-income earners who wouldn’t qualify for the most generous credits, says Christina Rice, director of the Graduate Tax Program at the Boston University School of Law. To compare which would be best for you personally — filing as an independent to access the stimulus checks or remaining as a dependent — Riskin recommends talking to a tax professional.

Roxanne Felig, a third-year PhD student at the University of South Florida, actually tried to refile her 2019 taxes to change her status to independent so she’d be eligible for the first two checks, but she received a letter from the IRS several months later saying that her application couldn’t be processed. Felig lives on her own and earns $18,000 a year as a graduate teaching assistant. But in 2019, her mother claimed her as a dependent on her taxes because she was a student under 24.

“It’s never been an issue for my mom to claim me,” she says. “It’s always ended up helping her because of her income bracket and not affecting my refund at all. Until this year.”

To help make ends meet, Felig worked a part-time job until she was laid off in the spring. She couldn’t receive unemployment because of her other on-campus job.

The $1,800 would have been equal to a tenth of her annual income, Felig says. The payment would have also made up the income that she lost from her second job. “As a grad student, I’m struggling on a daily basis,” she said. “I have…school fees due, which is about $900 a semester, which the stimulus would have helped cover.”

Felig is currently in the process of filing her 2020 taxes and she checked “no” when asked if she could be claimed as a dependent. She’s hoping she’ll be eligible to receive the stimulus as a tax rebate as soon as possible and that the incoming administration will be able to extend future payments to include college students.

“I can’t explain how frustrated I was to find out I wouldn’t be included in the first two,” she said. “I think my age group is already at a huge financial disadvantage with student loans and the low minimum wage so leaving us out of the first two was just a real slap in the face.”