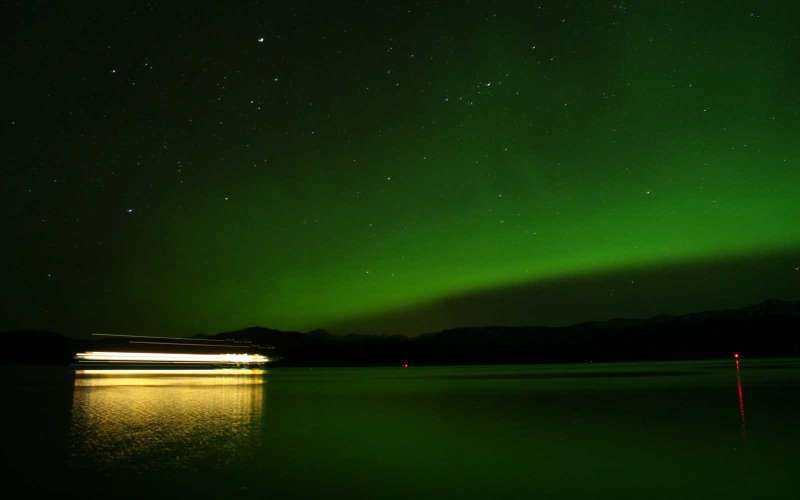 This is a 30 second long exposure of a cruise ship traveling through the Prince William Sound near Cordova, Alaska.
BlaisOne - Todd A. Blaisdell—Getty Images

No matter what kind of cabin you choose, you’re still guaranteed an unforgettable view on this cruise.

Hurtigruten’s special Astronomy Voyage is a 12-day cruise from the Norwegian towns of Bergen to Kirkenes and back. Not only does it promise views of Norway’s most fantastic mountains, fjords, and wildlife, it also guarantees the best view of the Northern Lights.

Of course, spotting the Northern Lights isn’t always easy. Getting a good view is often a game of chance, depending on the conditions of the sky. Nights must be very clear and not polluted with light.

Even though Hurtigruten promises a view of the lights, that doesn’t necessarily mean you’ll see them every night. According to The Telegraph, even though 2016 marked the voyage’s 10th season of a 100-percent sighting rate, at least six nights went by without any Northern Lights during a recent cruise.

If you don’t see them at all, you get to go on a second six- or seven-day cruise for free. The company’s website reads: “…we’re so confident that we have issued a Northern Lights Promise for our 12-day voyages that start in October and end in March. If the northern lights don’t occur during your voyage, we will send you on a 6- or 7-day voyage the following season, October through March.”

But the Astronomy Voyage is equipped with three renowned astronomers: Dr. John Mason MBE, Ian Ridpath, and Graham Bryant, who also give onboard lectures and presentations during the voyage. Each cruise has one of these scientists on board to educate and help look out for the lights.

In addition to exploring the Arctic sky, guests also get to visit the Science Centre and Tromsø Planetarium on day five of the cruise. The planetarium is the northernmost planetarium in the world and the largest in Norway, with a full dome ceiling offering 360-degree views and digital projectors showing daily films about the Aurora Borealis and the constellations.

Meals on the cruise include fresh fish and local meat. During the day, the ship also stops at a number of ports where guests can take a break from lectures and light hunting to shop and enjoy the local fare.

The Astronomy Voyage has departures listed from now until March 2018, costing £1,455 (about $1,950) per person. This price not only includes the Northern Lights guarantee, the cruise itself, and an English speaking tour guide, but also entrance to the planetarium and lectures from your cruise astronomer.

More information can be found on the Hurtigruten website.