Why U.S. Airlines Are Rushing to Apply for Scheduled Flights to Cuba 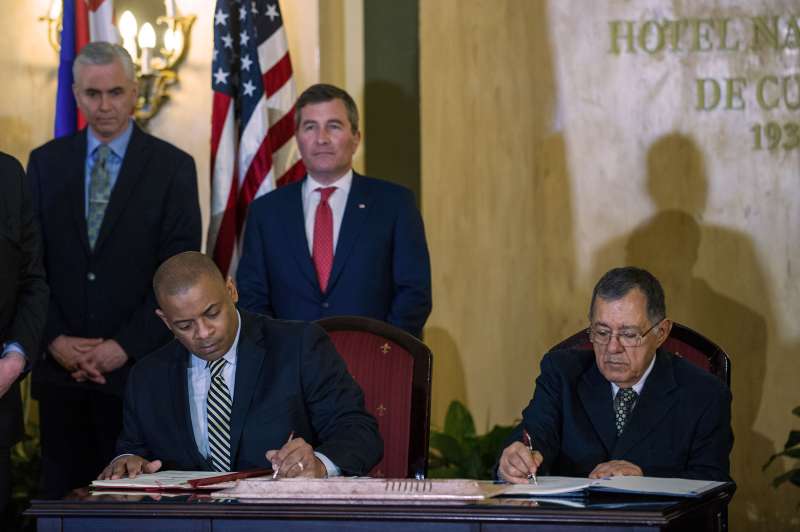 On Tuesday, officials from the U.S. and Cuba agreed to a plan to restore regularly scheduled airline flights between the nations.
YAMIL LAGE—AFP/Getty Images

Americans are one step closer to being able to more easily join Canadians and European tourists sunbathing on Cuba’s beaches.

The U.S. and Cuban governments signed an agreement Tuesday that will allow scheduled flights between the two nations to operate for the first time in more than 50 years. On the heels of that announcement, nearly every major U.S. airline said it plans to apply for flights to Cuba.

American Airlines said it envisions its Miami hub as playing a big role in the return of commercial flights to the island. “Miami is very important to us — a big part of our plans,” American Airlines vice president Howard Kass told the the Miami Herald. “But we’ll also be applying for other U.S. gateways.”

JetBlue, one of the fastest-growing carriers to the Caribbean, said it’s looking to gain approval for several routes between the nation. Delta, United and Spirit Airlines also confirmed they’ll throw their hats into the ring.

Others, such as Southwest Airlines, have taken a more cautious line, saying the news has only prompted them to consider an application for service to Cuba, according to USA Today. Seattle-based Alaska Airlines has also said it’s not sure it will apply, but with its major hubs located in Seattle and Portland, it may not be the best candidate for flights to Cuba.

Applications are due in March, with the government expected to make a decision in the summer. Carriers could begin selling tickets by the fall, the Wall Street Journal reported.

Service to Havana will be limited to 20 round trips a day from anywhere in the U.S.—about the same number as daily flights to tourist hub Punta Cana in the Dominican Republic. The agreement also allows for as many as 10 daily rounds trips to each of Cuba’s nine other international airports.

Despite the fact the U.S. and Cuba restored diplomatic relations last year, the U.S. government doesn’t allow citizens to travel to Cuba as plain old tourists. Instead, they must prove that they fall under 12 categories of travel, such as family visits or humanitarian projects, in order to book a charter flight.

American tourists presumably will still have to qualify under one of these categories to reserve a seat on a major carrier. However, as diplomatic relations between the two nations continue to normalize, experts expect Cuba will take off as a travel destination for U.S. citizens. It’s already a popular getaway for Canadians and Europeans: Of Cuba’s 3 million annual visitors, about a third hail from Canada, according to WSJ.