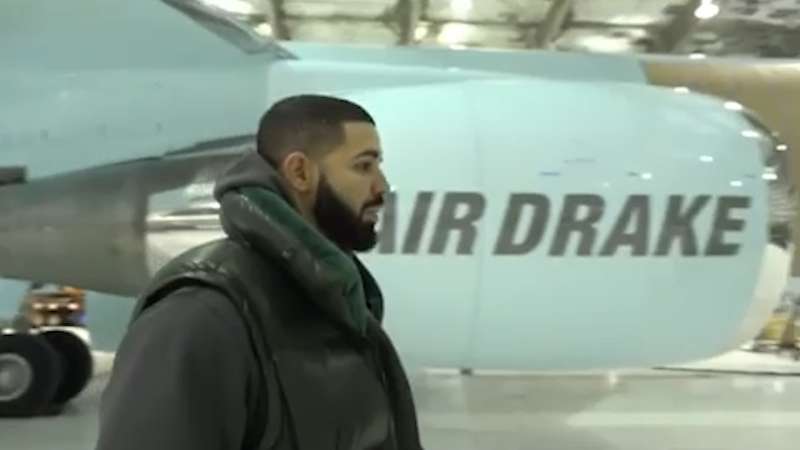 In the song “Trophies,” Drake admits that “anything I got is not a rental, I own that,” and apparently this now applies to the rapper’s method of air travel.

The rapper revealed his new ride on Instagram Friday. The huge jet features his OVO owl symbol, which is also the logo for Drake’s company October’s Very Own and record label OVO Sound.

The Grammy Award-winning musician also took fans on a video tour of the elegant gold and brown interior of the fuselage which had leather sofas, chairs, and a bar.

The video — which he captioned “Nothing was the same for real…” — also showed the emotional moment where the “Air Drake” decal was unveiled.

As Drake surveys his enormous plane in the video, he tells the camera, “No rental, no timeshare, no co-owners.”

At one point in the video, Drake points at the Canadian company CargoJet’s President and CEO Ajay Virmani, and says, “That guy made it happen right there, that’s the man.”

The unveiling of Drake’s plane is occurring at the same time Cargojet Inc. announced a partnership with the rapper.

“Supporting homegrown businesses has always been a top priority of mine, so when an opportunity came up to get involved with a great Canadian company I was honored to do so,” Drake said in a statement provided by Cargojet, which revealed that the rapper was “first introduced to the brand during the celebrations of its first B767-300F launch.”

“We are very excited to partner with Drake as our ambassador and assisting him with his logistical needs and requirements,” Virmani said in the statement. “We have had a lengthy relationship with Drake and this partnership has grown organically between both parties. Cargojet and Drake are both great Canadian successes, we are thrilled to be partnering together.”

And according to 2017 article by Airways magazine, the cost of a new Boeing 767-300F plane was roughly $185 million — without the OVO customization.

Drake can use his new plane to visit his son, who lives in France.

On Wednesday, Drake’s dad Dennis Graham candidly opened up about how Drake has handled being a father to his baby Adonis, whom he shares with former French adult-film star Sophie Brussaux.

“This is brand new,” Graham said on the red carpet of the Fashion Nova X Cardi B Collection launch. “The baby is only 17 months. He hasn’t had a lot of time [with him], but the baby loves him.”

Graham added, “I’ve seen them interact together, and it’s beautiful.”

And when asked if he offered his son any advice on how to care for his own little one, Graham said, “He didn’t need it. He’s got love in his heart.”

Drake had previously confirmed that he was a dad to Adonis last October.

“I am a single father learning to communicate with a woman who, we’ve had our moments,” Drake revealed to LeBron James on the Lakers star’s unscripted HBO series The Shop.

“I do want to be able to explain to my son what happened,” he added. “But I don’t have any desire for him to not love his mother. I don’t ever want the world to be angry at his mother. We have found ourselves in a situation and we are both equally responsible. Now, I’m just really excited to be a great father.”