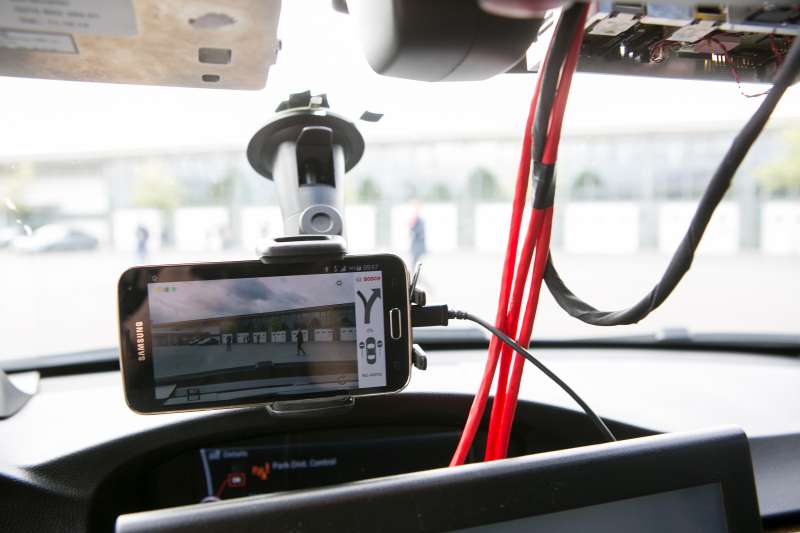 A Samsung Electronics Co. smartphone camera displays a wrong-way driver warning app as it sits on the windshield of a Bayerische Motoren Werke AG (BMW) 3 Series automobile at the Robert Bosch GmbH driverless technology press event in Boxberg, Germany, on Tuesday, May 19, 2015.
Bloomberg via Getty Images

Automakers will have to focus on women if they hope to make driverless cars mainstream, according to a NerdWallet survey that shows men are far more likely to express interest in the new technology. The survey of more than 1,000 Americans nationwide also exposes a sharp divide in views on self-driving vehicles between millennials and older Americans.

Only 37% of women surveyed by NerdWallet expressed any interest in owning a self-driving car, while half of men expressed interest.

Meanwhile the survey found that 53% of respondents ages 18-29 were “very interested” or “somewhat interested” in owning a self-driving car, compared with just 41% of those 30 and older.

Among key findings of the survey:

Self-driving cars, also known as autonomous vehicles, once seemed the stuff of science fiction, but they are already testing on the highway and seem certain to end up in dealer showrooms before long. Yet our survey of more than 1,000 Americans found a distinct lack of enthusiasm toward the prospect of driverless cars, with only a small minority “very interested” in buying one and nearly twice as many saying they were “not at all interested.”

Google recently announced that it will begin putting its self-driving cars on public roads in Mountain View, California, this summer. Over six years of testing, Google says its cars have been involved in only 11 accidents — none of which were the fault of the Google car. In most cases, the cars were rear-ended.

A self-driving Audi recently completed a trip from San Francisco to New York in nine days, driving in automated mode 99% of the time, according to Delphi Automotive, which made the technology.

Tesla CEO Elon Musk recently announced a software upgrade for some of the maker’s electric cars that will make it possible for the cars to drive from San Francisco to Seattle without human input — “from parking lot to parking lot,” as he put it at a news conference. However, the full autopilot feature will not be enabled, at least initially, he said.

While our survey found Americans as a whole relatively unenthusiastic about driverless cars, men were far more likely than women to express interest.

Self-driving cars use GPS and a variety of sensors (cameras, radar and lasers) to scan and identify the environment around the car. A computer in the car processes data from the sensors to decide on driving actions such as steering, braking and turning. Cars would be networked, using vehicle-to-vehicle (V2V) communication to talk to one another. Ultimately, a human driver becomes just another passenger and would be able to sit back and do other things while en route.

The potential for reducing car accidents could be significant. After all, the computer never takes its “eyes” off the road, never gets distracted, never gets tired.

On May 13, Transportation Secretary Anthony Fox announced that the U.S. Department of Transportation will fast-track rules to require V2V communication in future cars.

Still, many people are firm in their resistance to driverless vehicles: 28% vow they will never purchase a driverless car. Only a very small contingent (3%) is ready to buy a self-driving car right now. The majority of those surveyed (51%) would wait three years or longer after such cars became available before considering buying one.

Notably, fewer than one-third of people found the potential for improved safety to be a compelling reason to own a driverless car.

The older the age group, the more likely respondents were to say they couldn’t find anything appealing about driverless cars, from a low of 26% among those ages 18-29 to 44% among those age 60 and older.

Safety and cost are top worries

Safety concerns are a major drawback of self-driving cars, according to 46% of respondents, but cost was the biggest worry.

Concern about safety also bubbled up when we asked about car insurance rates. Typically, cars that crash less are rewarded with lower auto insurance rates. But only 41% of people think owners of self-driving cars should pay less for insurance.

As another measure of trust in autonomous car technology, we asked whether people would put a child in a self-driving car alone to go to school or a friend’s house. Only 6% gave a thumbs-up to that idea. Most people (76%) said no, and the rest were unsure.

However, people did show interest in safety technologies such as collision avoidance, suggesting the possibility that they will eventually come around to self-driving cars if they can be sold on the cars’ safety promises (and if men can still have a little fun). Only 9% of people said they had no interest in any of the technologies we asked about.

There’s a very small, enthusiastic contingent of people who are ready to embrace driverless cars today: 3% of respondents say they would purchase a driverless car today if they could, and 6% say they’d be willing to pay more than $10,000 extra for a fully autonomous car over a regular car.

Another 15% say they would pay $5,001 to $10,000 more. (Experts generally predict that self-driving cars will cost about $7,000 to $10,000 more than regular cars when they are introduced, with the price differential decreasing in subsequent years.) But pessimism about the value of autonomous cars still prevails: 50% of people say they wouldn’t pay a dime more.