Is the Clinton Email Probe Impacting the Election? Look at the Mexican Peso 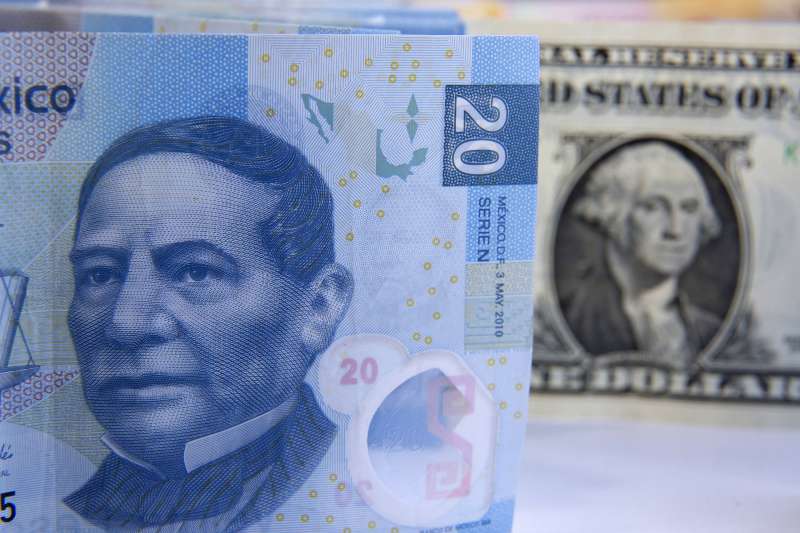 Mexican Peso bills are arranged for a photograph with a U.S. one dollar bill in Mexico City, Mexico, on January 27, 2016.
Susana Gonzalez—Bloomberg via Getty Images

Days after news broke that the FBI was reopening its probe of Hillary Clinton’s emails, polling experts are still puzzling over how voters will react.

Rather than endlessly hitting refresh at fivethirtyeight.com or realclearpolitics.com, though, you can get a quick idea by checking how certain financial markets are reacting.

The following three markets moved almost instantly when news of the FBI investigation hit the news on Friday:

Mexico is inextricably linked to Election 2016 thanks to Donald Trump. Not only has Trump proposed erecting a wall along the U.S.-Mexico border that he says Mexico will pay for, the Republican candidate has also called the North American Free Trade Agreement, “the single worst trade deal ever approved in this country.”

Regardless of your own opinion about NAFTA and its effects on U.S. jobs, it is widely feared that part of Trump’s solution — imposing 35% tariffs on Mexican imports — could spell big trouble for the economy of our third largest trading partner.

This has given the Mexican Peso — which has fallen about 13% against the dollar in the past 12 months — a surprising role in this election. The peso rose about 2.3% when Clinton shined during the first debate. It tumbled about 1.3% against the dollar on Friday, after the latest FBI revelations.

You can see how the peso is doing at Yahoo! Finance is another.

It’s no secret Wall Street is wary about Trump’s immigration and trade policies.

One recent academic study suggested a Trump victory could knock 10% off the market’s value. Keep in mind, that doesn’t necessarily mean stocks will suddenly slide on election day, even if Trump wins. Any outcome that’s widely foreseen isn’t likely to move stocks in either direction.

On Friday, however, the election’s dynamic changed suddenly and by surprise.

The Standard & Poor’s 500, which had been up about 0.3% on the day, dropped about 1% in the hour after the news hit. (Similarly in late September, when Clinton seemed to get upper hand in the first debate, stocks jumped.)

While looking at at the stock market is one of the fastest ways to get a read on big election news, it can be fleeting. Indeed, as of lunch time Monday, the S&P 500 had regained much of the lost ground was back about to where it opened on Friday.

Stock information is easy to find, there are links on the home pages of The Wall Street Journal and Bloomberg. While commentators like to talk about the Dow, which has a longer history, the S&P 500, made up of the 500 largest U.S. stocks offers a more comprehensive picture of the market.

In recent years many economists have heralded the ability of online betting markets to forecast future events. The idea is that, with a little money on the line, people’s real opinions tend to become easier to discern.

Of course, online gambling isn’t allowed in the U.S. But that’s not the case in other parts of the world.

One of the most followed betting markets is Dublin-based Betfair. Betfair’s Web site won’t allow users based in the U.S. to open an account, but it’s own team of writers regularly updates the site with news about the candidate’s shifting fates. (On Friday, following the FBI news Clinton’s odds fell from 82% to 73%.)

Another site, PedictIt, a non-profit run by New Zealand’s Victoria University, does operate in the U.S. with a special legal waiver and bets limited to $850. Since Thursday, Clinton’s chances of wining have fallen from 74% to 71%.

While prediction markets have gotten trendy in the past few years, they are not perfect either. Critics point out they bungled two of this year’s biggest electoral surprises, badly underestimating both Trump’s rise in the Republican primaries and the U.K. Brexit vote in June.