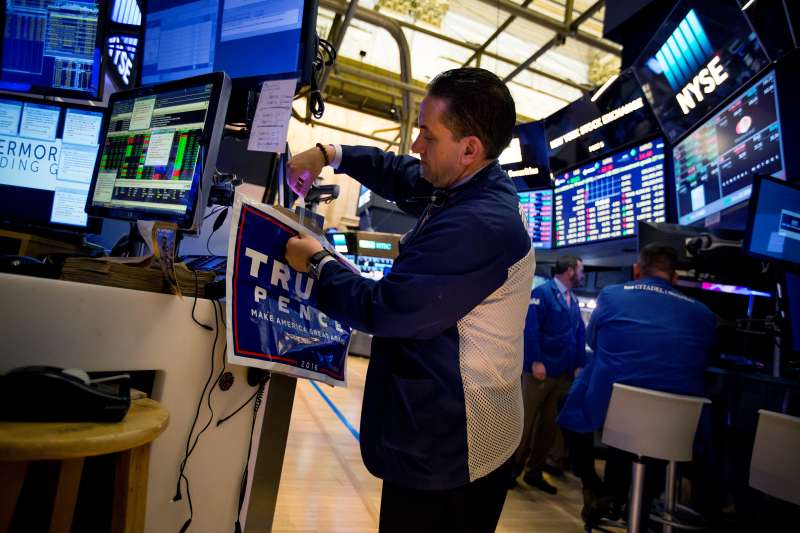 Emotion can drive investor behavior – and feelings are in overdrive following last month’s election. Across the United States, the mood ranges from a state of mourning to euphoria, depending on one’s political views.

But retirement investors are not hitting the panic button in the wake of the Nov. 8 election.

The Vanguard Group reports that mutual fund exchange activity spiked the day after the election, with about 2,500 account holders making trades. Activity is still higher than normal, but most of Vanguard’s 4 million 401(k) investors are staying put.

If anything, optimism is driving the market. For example, Fidelity Investments reports that IRA investors have turned more bullish since the election. The buy/sell ratio jumped to 1.37 last week from 1.15 in the last week of October. (A buy/sell ratio of more than 1.0 is bullish, and the 1.37 ratio indicates 37 percent more buys than sells). The S&P 500 Index has gained 2.8 percent since the election through Wednesday’s market close.

The optimism is shared by financial advisers. A post-election poll by the Financial Services Institute of more than 1,300 advisers found 56 percent expect a strong market for equities next year; 37 percent think markets will be flat and just 7 percent expect weakness.

“Investors are showing surprising confidence,” said Roger Aliaga-Díaz, a senior economist with Vanguard’s Investment Strategy Group, referring to the overall market. “We expected to see higher volatility for a while with this election result, but not the immediate positive reaction in equity markets.”

The bullish sentiment is driven by expectations of a White House aiming to reduce business regulation and willing to pursue strong economic stimulus in the form of infrastructure spending and tax cuts. The stimulus could drive deficits higher – which in turn could lead to higher interest rates and inflation.

I have argued elsewhere that the election results pose serious threats to retirement security, including repeal of the Affordable Care Act, Medicare privatization and Social Security benefit cuts.

But for retirement investors who are well-balanced between equities and fixed income, there is no reason to go on the defensive, argues John Rekenthaler, vice president of research at Morningstar.

“We all get worked up during political campaigns about the importance of the election – the intensity of the emotions people have is part of the process. That tends to build up a belief that the election outcome will change a lot of things, but history tells us that fewer things change than people expect.”

Read: No Matter What Trump Does, Keep Your Hands Off Your 401(k)

History could just be wrong about a lot of things this time – but perhaps not when it comes to investment results, which are affected by a wide array of factors beyond politics. The U.S. economy is highly integrated with the global economy, which is driven by policies outside any administration’s control.

Official interest rates are set by the Federal Reserve, and Janet Yellen’s tenure as chair of the Fed’s Board of Governors is not scheduled to end until January 2018. Rekenthaler notes that the stock market boomed under President Bill Clinton, fared poorly under George W. Bush and doubled during Barack Obama’s administration. That history runs counter to the conventional wisdom that markets struggle under Democrats and thrive under Republicans.

We do not yet know how much stimulus the Trump administration will be able to drive through a Congress that – at least until this point – has been obsessed with deficit reduction.

Trump’s tax cuts and infrastructure spending plans would add about $6 trillion to the national debt over the coming decade, according to the independent nonprofit Committee for a Responsible Federal Budget.

This much is clear: higher spending and deficits would lead to higher interest rates, and possibly inflation. That will have implications for retirement investors – and for current retirees.

For investors, higher rates present short-term risk to the value of bonds or bond funds (the value of bonds have an inverse relationship to rates). Already, the Bloomberg Barclays U.S. Aggregate bond index has dropped 2.26 percent since the election, and yields have jumped 40.29 basis points

Investors holding bonds with maturity dates longer than seven years – or bond funds labeled “long” – have good reason to at least re-evaluate their holdings, Rekenthaler said. “It’s not an argument for getting out of fixed income, but to make sure that if you are long, you really have a good reason for taking that risk.”

Investors with well-balanced portfolios likely would be more than compensated for any short-term bond losses by rising stock prices, argues Aliaga-Díaz. “Higher yields will feel rocky on the front end, but over time, higher yields will start to bear fruit.”

Down the road, higher rates would be good for retirees, who have struggled ever since the Great Recession with near-zero interest rates that have made it impossible to earn an after-inflation return on low-risk holdings. And while higher inflation might hurt seniors’ pocketbooks, some of that would be offset by higher cost-of-living adjustments to their Social Security benefits.

The bottom line? The climate for retirement investing and retiree may be about to change, but do not let your politics – or emotions – drive you away from the fundamentals. Saving regularly and staying diversified with a balanced allocation are the key elements for success.

The rest is noise.