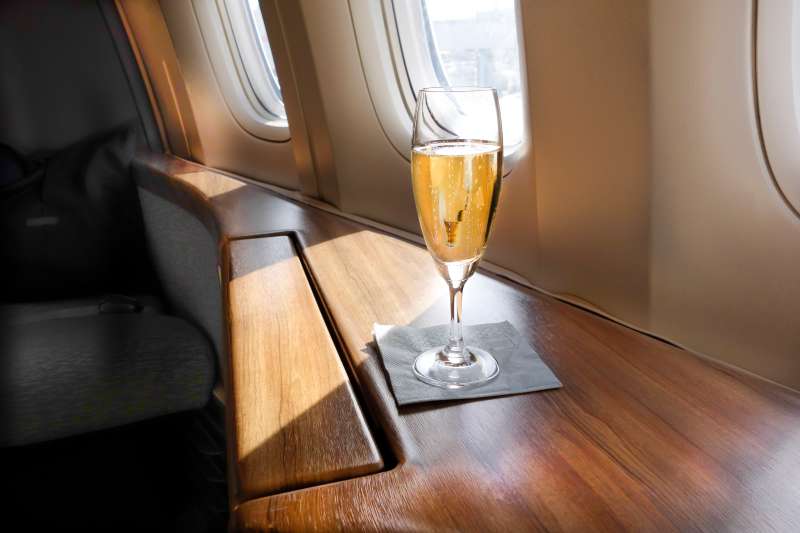 A “free” first class upgrade is the Holy Grail of air travel. And Sam Huang did it with one of the most sought-after premium sections on the planet — an around-the-world flight in one of Emirates’ legendary First Class Suites.

If he’d paid for it with real money, Huang would have shelled out a cool $60,000 for the decadent private suite, the all-you-can-drink Dom Perignon and gourmet meals. But he did it with miles.

Unbelievable, but apparently true. You can read exactly how he pulled it off on his site, which advises loyalty program members on how to game the system.

Something for nothing? How is that even possible?

There’s a colorful and controversial history of hobbyists pursuing miles and upgrades without paying for them.

Pudding for a mile

The free miles movement rose to prominence in 1999, when David Phillips, an engineer from Davis, Calif., figured out a way to quickly earn American Airlines miles from the back of pudding boxes. All told, he racked up more than 1 million miles, earning him the nickname “The Pudding Guy.” His initial $3,000 investment yielded about $150,000 worth of miles, enough to earn Phillips lifetime gold status. And he did it without darkening the door of an American Airlines aircraft.

Tim Doke, an American executive who worked for the airline at the time, told me the company “was not too bothered by the scam, since the miles he obtained were actually purchased from us by the promoter, ConAgra Foods.”

“Given all the stuff that happened at American on a daily basis, this one barely scored a blip on the radar screen,” he added.

An upgrade via U.S. mint coins

The free miles movement gained more momentum in 2008, when upgrade-obsessed frequent travelers discovered they could exploit a loophole in a U.S. Mint promotion to collect airline miles, which could be turned into upgrades.

Legions of point-collectors purchased the coins, collected the miles, and then returned the currency for a full refund.

“My partner and I will be departing on a luxury first class vacation in the French Riviera using this frequent flyer miles strategy!” noted an anonymous poster on a credit card forum.

The government eventually shut down the program, saying it felt “violated” by the point collectors.

After the coins, upgrade aficionados found a new toy: the credit card. Many cards allowed members to collect miles for every dollar spent. But like the U.S. Mint special and the pudding promotion, they can easily be gamed through a process called manufactured spending.

Entire blog networks dedicated to helping people manipulate the system to amass more miles and upgrades sprang up. The most successful mileage collectors dispensed advice to legions of the faithful, were subjects of fawning magazine profiles and they almost never flew coach.

Loopholes are closing, though

The loopholes these collectors use are slowly closing, too. Banks are tightening their credit card program rules, making it harder to create miles out of nothing. And airlines are adding new restrictions to their loyalty programs, putting elite status out of reach to those who aren’t willing to spend real money on status.

Even Huang, who insists he is not a blogger, points out that technically his around-the-world flight wasn’t completely free. He still owed the airline about $300 in fees.

So what are the new tricks?

Getting in on the action isn’t difficult, and you don’t have to be that clever. You can sign up for a service like Huang’s TopMiles or any one of a dozen sites that will help you optimize your existing mileage portfolio and collect even more.

TopMiles allows you to input your departure and arrival city and displays the number of miles you need for a “free” ticket. It then shows you the credit cards with the highest sign-up bonuses that you can use for each program. The service also helps users keep track of their spending on the cards.

“Finally, once they have enough miles, they can go through my step-by-step guides to redeem their miles,” he says.

But how, exactly, did Huang manage that Emirates ticket? “It’s a bit difficult to compress in a sentence, but essentially I booked the trip as two flights with a bunch of extra layovers in between,” he told me. “Usually airlines have ‘routing rules’ that restrict where and how long you can lay over in, but in this case there were no rules in the computer system.”

Natalie Holder, an employment lawyer who has served as an ethics and compliance officer for companies like Starwood and Diageo, says if consumers don’t have ethical misgivings about these practices, they should.

“The litmus test of ethical conduct is whether the item was obtained through an unfair advantage that violates a company’s policies or a law, depriving well-meaning customers of a good or service,” she says. “When a company learns about these loopholes, it often has a team of internal investigators in legal compliance, internal audit and other departments to find the source of the slippage and close any gaps between ethical and unethical conduct.”

Huang says his upgrade was legitimate. “I think I did nothing wrong,” he says. “Airlines use computer systems to make decisions, often not in favor of consumers. Think about your $150 change fee or non-refundable tickets, it’s encoded in the computer system. In this lucky case, the computer allowed me to book this ticket.”

But that loophole is almost certain to be closed quickly, says Steven Zussino, who runs the site Canadiantravelhacking.com.