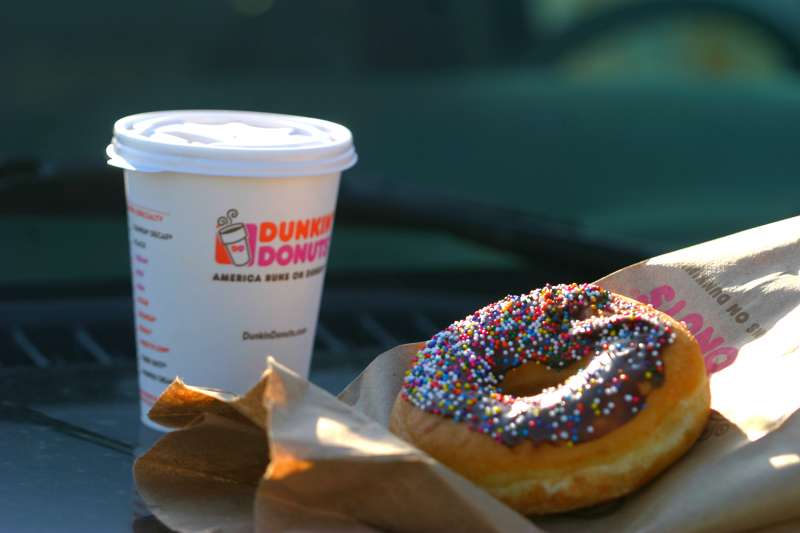 Friday, June 5, is when the annual, much anticipated National Donut Day giveaways are hosted around the country. This year, no fewer than eight donut chains and convenience stores are participating, bringing free donuts and joy to the masses. The tragedy, though, is that the typical National Donut Day beneficiary probably gets only one or two free donuts on this day. That’s hardly maximizing one’s potential for complimentary Boston Crèmes, jellies, glazed, and such.

Because the locations of some of the participating players are limited to specific regions of the country, without the aid of a private jet it’s basically impossible for any individual to take advantage of every donut giveaway under the sun on Friday. How sad. But after spending far too much time examining giveaway locations and seeing where they overlap, we—OK, I, since nobody else at Money.com or Time.com would waste several hours on such nonsense—created the Ultimate Free Donut Road Trip Challenge itinerary.

Intrigued? Here are some key numbers for the challenge to get your salivary glands pumping even harder.

Calories consumed: If you care, this isn’t the trip for you

Before jumping into the turn-by-turn particulars, let’s get a few “Experts Only! Do Not Try This At Home” sorta things out of the way. This road trip is not advisable in any nutritional, environmental, intellectual, or fiscal sense. It is an exercise in gluttonous non-exercise. The amount of money you’ll spend on gas and tolls on this trip, not to mention Pepto Bismol during the recovery process, could easily cover the costs of simply buying a dozen donuts—heck, probably three dozen—which you could scarf down quietly in the privacy of your basement.

There are also crafty ways to get loads of free donuts that require less time and effort. Those with a flexible sense of ethics could probably hit up the same donut shop several times in the course of the day and snag a freebie each time, perhaps with the assistance of a fake mustache here and there. Or, in regions that are teeming with Dunkin Donuts or Krispy Kremes, you could swing by and grab a free donut at each different location. Such tactics are antithetical to the spirit of National Donut Day freebies.

Still, in pretty much every way, it is unquestionably stupid to embark on a trip like this. And yet all logic and practicality pales in comparison to FREE DONUTS. Seven of them!

Without further adieu, here’s our suggested itinerary for the ultimate National Donut Day free donut road trip. It’s not for the meek, the weak, or the remotely sensible.

Donut #1: Greenwood Lake, NY
Cumberland Farms, the convenience store chain with locations throughout the Northeast and Florida, is giving away donuts with the purchase of a coffee or another beverage in newly remodeled stores like this one, from 5 a.m. to 10 a.m. on Friday. Best to get there early, like pre-dawn. You’ve got a long day ahead, with many miles, and many donuts, to go before you sleep. (Alternate start locations are possible at a cluster of new-concept Cumberland Farm locations around New Haven, CT, off of I-95.)

Donut #2: New York, NY
Entenmann’s is hosting a huge donut giveaway on Friday in New York City, as well as smaller freebie events in select spots around the country, including Boston, Buffalo, and Chicago. Free donuts and coffee are being handed out from 7 a.m. to 1 p.m. at Manhattan’s Madison Square Park. Our advice is to get in and out of the city as early as possible to avoid the worst of rush hour(s) traffic.

Donut #3: New York, NY
Use this Tim Hortons coupon at the coffee shop location of your choice in Manhattan—there’s one on E. 34th St. and a few around Penn Station, not far from the Entenmann’s giveaway. Technically, the coupon, good for a chocolate hazelnut donut filled with Nutella, doesn’t have to be used on Friday. It’s valid all the way through August 30. But the judges have ruled that doing so would disqualify you from the one-day free donut challenge. [UPDATE: Tim Hortons will also have a separate offer just for National Donut Day, in which each customer can get a free donut with any purchase. The details will be on the company’s Facebook page on Friday.]

Donut #4: Red Bank, NJ
The overall itinerary calls for a drive down the Jersey Shore before looping across to Philadelphia, and there are a bajillion Dunkin Donuts along the way. A stop at the DD in Red Bank sounds about right. Purchase any beverage, and the donut of your choice is free on Friday.

Donut #6: Collingswood, NJ
Before crossing over the Delaware into Philly, make a pit stop at the Krispy Kreme in Collingswood for your fifth freebie of the day. Any flavor donut goes, no purchase necessary

Donut #7: Philadelphia, PA
It’s not just donut sellers getting in on the National Donut Day action. Jiffy Lube locations in the greater Philadelphia area are providing complimentary tire air pressure checks, as well as complimentary donuts all day on Friday. Try not to boast too much about your magical donut mystery tour to the chumps sitting around wait for their oil to be changed, while they enjoy a grand total of one measly free donut.

And hey, you’re in Philly. Once the donut mission is complete, you might as well grab a cheesesteak or something.