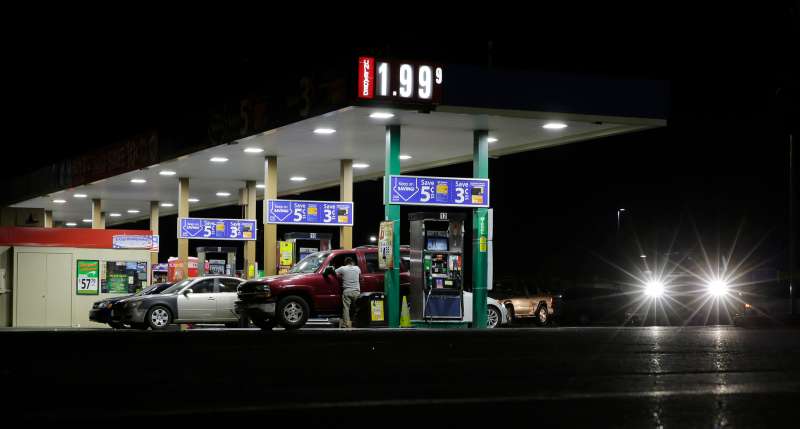 Motorist purchase gas at a station that dropped the unleaded fuel price to $1.99 per gallon, Wednesday, Aug. 26, 2015, in San Antonio.
Eric Gay—AP

As Labor Day 2015 approaches, the price of filling up the tank at the gas station is, well, tanking. Gas prices have been plummeting of late, with the national average for a gallon of regular dropping more than 20¢ over the last month—and 10¢ during the previous seven days alone.

Earlier this week, AAA noted that gas prices for Labor Day 2015 would be the cheapest they’ve been since the holiday weekend of 2004. And prices have kept falling in the days since that AAA report was released.

On Thursday, the national average stood at $2.438, almost exactly $1 less than it was a year ago at this time ($3.433). Considering that Labor Day is such a prime road trip weekend, and that the price of gas is so low compared to last year, it got us thinking: Just how much are drivers saving?

Here’s some very quick, back-of-the-napkin math that, while admittedly flawed and probably simplistic, should give you a ballpark idea. It’s been estimated that 30 million Americans will embark on road trips for the holiday weekend and travel at least 50 miles from home. Playing it very conservatively, let’s say that each will have a round trip of 100 miles. Most will do some driving while at their destination as well, so let’s add another 40 miles, for a total of 140 miles.

Now, how much gas is each of these vehicles using over the course of the weekend? Data from the University of Michigan Transportation Institute shows that the fuel economy of average new car sold in August was 25.3 mpg. Assuming that new cars get better mileage than the typical (older) car on the road, let’s use 20 mpg as a nice round number for the fuel economy of the average vehicle hitting the road over Labor Day.

A vehicle that gets 20 mpg that is driven 140 miles will use 7 gallons of gas. So those 30 million Americans are using 210 million gallons of gas altogether this weekend. Now that each of those gallons cost $1 less than it did a year ago, the cost of fueling up will be collectively down $210 million compared to Labor Day 2014.

That sounds like a lot of money, and it is. But AAA says it doesn’t come close to the true savings in store for drivers this weekend. Considering that many vehicles will travel far more than the ballpark number we used, and that SUVs, large cars, and other gas guzzlers that get poor mileage will be amply represented on the road this weekend, AAA estimates that drivers will collectively save perhaps five times as much in gas money as what we came up with.

“U.S. consumers should save more than $1 billion on gasoline over the holiday weekend compared to 2014, with many drivers saving about $15-$25 on every trip to the gas station,” a new AAA press release states.