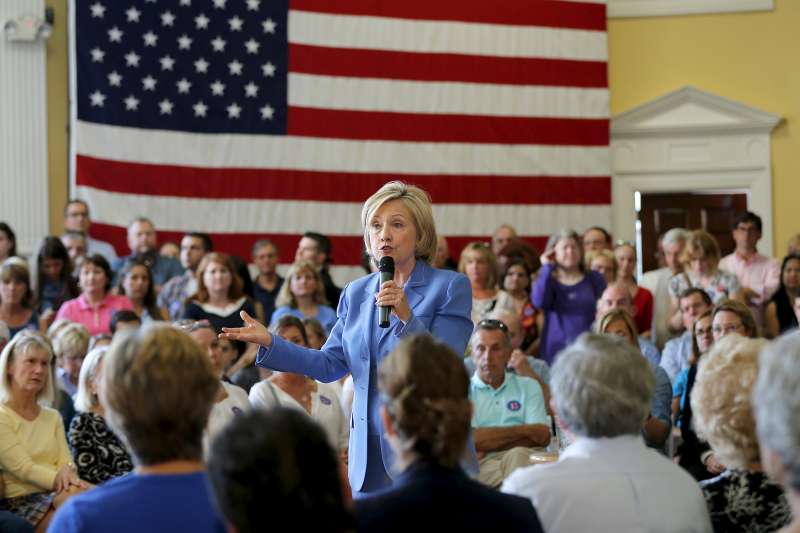 Democratic presidential candidate Hillary Clinton on Thursday outlined a plan to encourage companies to share more of their earnings with workers. It’s a tax credit companies could get for two years if they set up a profit-sharing plan tilted toward the lower- and middle-income employees on the payroll. (The tax credit would phase out for higher-paid workers.) In an example used by the campaign, if an employee was paid $5,000 in a profit-sharing bonus, the company would get a tax break of up to $750.

At least at first, the plan has generally been interpreted as part of Clinton’s tilt toward the progressive side of the economic debate. “Veering left…” is how the insider political paper The Hill put it.

Clinton herself has fit profit sharing into her broader message about fixing economic inequality. Here’s a graphic from the campaign website that illustrates the story Clinton is telling about what’s driving inequality. Companies are doing great and getting more productive, but they haven’t haven’t been sharing those gains with workers:

SOURCE: hillaryclinton.com, based on data from the Economic Policy Institute

But even though profit sharing has the word “sharing” in it, it’s actually a pretty business-friendly approach. (The idea that the credit phases out for higher earners is the main way you can tell the proposal comes from a Democrat.) Lots of companies like the idea of paying their people more only when the business is doing well; the flip side is they can pay less in fallow years. In the jargon of human resources, other names for profit sharing are the much less warm and fuzzy sounding “pay-at-risk” and “variable pay.” Walmart, a company that’s famously tough about holding down its labor costs, used to be well-known for profit sharing.

At qz.com, writer Alison Shrager worries that more profit-sharing would just shift more pay out of steady wages and into up-and-down bonuses, adding another source of instability to the finacial lives of low-and middle-income workers. The Clinton campaign told Vox.com that companies would only be able to get the credit for profit sharing above regular wages—presumably meaning they couldn’t cut salaries and then get a credit for adding a profit-sharing plan. But over time, as companies gave out regular raises and made new hires, or as new firms started up, the mix of pay might still shift toward variable bonuses. Profit sharing eligible for the credit would be capped at 10% of salary.

If Clinton’s proposal became law, it would really be just one more of several tax policies that shape how companies structure their pay. If you get health insurance at work or a 401(k) match, that’s because the tax code makes it appealing for companies to pay you that way. You pay less tax on $1 of health insurance or $1 of a 401(k) match than you do on $1 of straight cash pay, so companies like to offer those benefits; similarly, it would be slightly cheaper for a company to give you $1 of profit sharing than to give you $1 of a raise. As an economist will tell you, the health insurance you get at work isn’t a free gift on top of your pay. It’s part of your overall compensation. If companies didn’t offer health coverage, they’d have to pay us more. (Of course, then we’d still have use that money to buy insurance.)

So perhaps Clinton’s plan would largely move money from one line in your pay stub to another. But it might be better than a zero-sum game. For one thing, it’s effectively a tax cut on pay, which the Clinton campaign says is worth $10 billion to $20 billion over ten years—not huge as these things go. Companies would get the credit directly, but to the extent that it encouraged companies to make more money available for profit-based bonuses, the tax break could flow through to workers. (Though the campaign says one purpose of the temporary credit is simply to offset the administrative costs of starting up a profit-sharing program.)

And there’s at least some evidence that companies with profit sharing actually do pay more overall. An influential think-tank policy paper on “inclusive prosperity,” which the Clinton campaign is reported to be be drawing from, points to a study of the effects of profit sharing by the economists Joseph Blasi, Richard Freeman, and Douglas Kruse. Based on surveys of workers, it found that pay was generally as high or higher among companies that gave workers some kind of stake in company performance. That includes not just profit-sharing bonuses but employee stock options and other programs.

Why? Partly it may be because you have to give people a shot at higher total pay to compensate for the risk that they might not do as well in some years. Or, the economists write, it could be that people are getting paid more because profit sharing spurs them to be more productive. That looks like a win-win, but its not exactly money for nothing. Maybe profit sharing works because it improve morale, reduces employee turnover and gives people an incentive to worker smarter and more creatively. Or perhaps anxiety over losing a bonus scares people into working harder and faster.

But the wage stagnation of the past several decades isn’t mainly a productivity problem—just look at the Clinton campaign’s own graphic above. People with jobs these days are already working smart and working hard.

Profit-sharing tax credits might nudge some companies to share more of the gains from that productivity with people outside the C-suites. But the story of the last several years is that it’s taken employment a long time to climb back from the hit it took in 2008. One thing that really helps people get more pay—whether it’s in cash, bonuses, stock option, pensions, or insurance—is full employment and a hot labor market, where companies have to do everything they can to get the workers they need. That’s something Washington has had a hard time delivering.