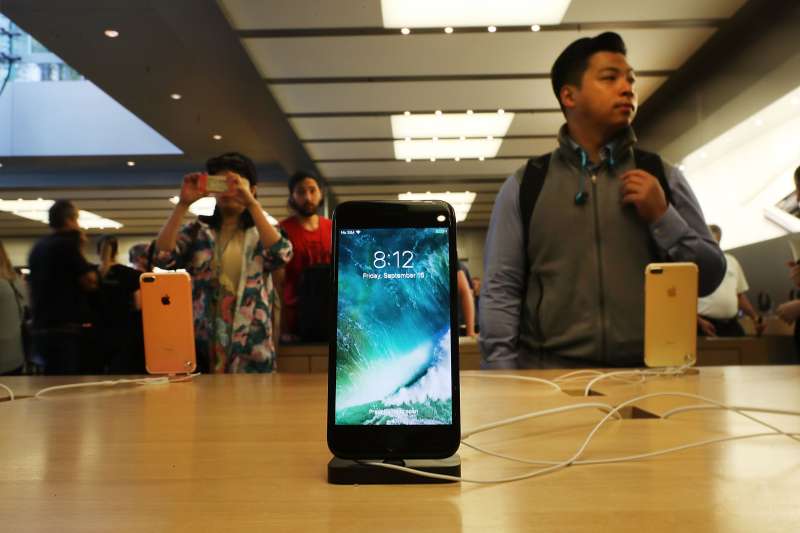 The new iPhone 7 is displayed on a table at an Apple store in Manhattan on September 16, 2016 in New York City.
Spencer Platt—Getty Images

Apple employees enthusiastically counted down the last moments before stores from San Francisco to Shanghai opened on Friday to launch the iPhone 7, but the ranks of shoppers were notably thinner than in previous years.

Apple fans assembled at stores around the world to be among the first to buy the iPhone 7, the retail phenomenon that accompanies the launch of the company’s updated flagship product each year.

The tech giant announced earlier this week that the larger iPhone 7 Plus had sold out, prompting some who had set up camp outside Apple’s marquee store in San Francisco to pack up their bags and head home.

To be sure, online pre-orders have made lines unnecessary for all but diehard fans, and in Chinese stores only those who had ordered in advance were queuing to collect.

Yet in markets like China, online interest in the new phone has also been muted, as cheaper local brands amp up their design and marketing.

Wu Ting, a 28-year-old from Nanjing, was surprised to find herself first in line at a downtown Apple store in Shanghai on Friday, a holiday in China.

“I found last year that there were crowds of people, but this year almost no one. I came an hour early thinking I’d have to wait a long time before getting seen,” Wu said.

Read More: Apple Stock Is the Highest It’s Been All Year

The stakes for the iPhone 7 are high after sales of the gadget dropped during two straight quarters this year, the first declines in its history. The iPhone is Apple’s lifeblood, accounting for more than half of the company’s revenue.

But some on Wall Street fear that the world’s most valuable company is due for a disappointing year as the redesigned phone features largely incremental improvements, such as an enhanced camera and new headphone technology.

Sales in China will be a key harbinger for Apple’s prospects: The success of the iPhone 6 in China propelled the company to record heights in 2014, while the 6S contributed to the company’s first global revenue drop in over a decade earlier this year.

Apple will not release first-weekend sales of the phones this year, a break with previous policy. The figure has become a reflection of supply more than demand, the company said.

An index of searches on Baidu, China’s most popular search engine, shows the new phone lagging both the iPhone 6 and iPhone 5.

Apple’s Greater China sales dropped by a third in April-June, albeit after more than doubling a year earlier, while its market share has fallen to around 7.8%, placing it fifth behind local rivals Huawei, OPPO and Vivo.

“From Steve Jobs to Tim Cook, Apple has never had any marketing strategy tailor-made for China,” said Zhou Zhanggui, a Beijing-based strategic consultant. “Apple risks losing out more if it does not better cater to local demands in its marketing as well as product design.”

In Beijing’s fashionable Sanlitun shopping district, several people who had already grabbed new iPhone 7s were hawking them for a markup just outside a flagship store.

Loyal Fans Line Up In Sydney

But Apple has not lost its shine for all customers.

Marcus Barsoum, a 16-year-old who described himself as a “diehard Apple fan,” spent two nights camped outside the Sydney store. By morning, some 200 people were gathered in light rain to be the first customers globally to own iPhone 7s.

Weary but elated, Barsoum charged into the store at 8 a.m. to the cheers of Apple staff. He emerged with a matte black iPhone 7, although he had wanted a larger 7 plus in jet black.

Omar Nofal, a 26-year-old doctor in San Francisco, was all smiles as he emerged from the Apple Store with a silver iPhone 7, his first upgrade in four years. He said he was tempted to hold off until next year, when many predict Apple will redesign the iPhone to mark the gadget’s 10th anniversary, but his phone has a cracked screen.

“I couldn’t wait another year,” he said.