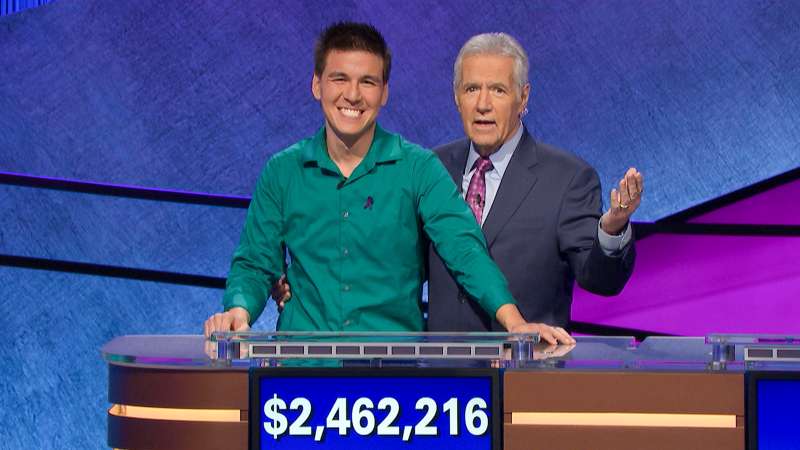 James Holzhauer is giving back to Alex Trebek in a big way as the Jeopardy! host continues his fight against pancreatic cancer.

After winning a total of $2,462,216 over the course of 32 straight games on the syndicated show, the Las Vegas-based professional sports bettor, 34, has donated a portion of his winnings to a charity event raising money for pancreatic cancer research in Trebek’s name.

According to a donation listing on the website for the 2019 Naperville Pancreatic Cancer Research Walk in Naperville, Illinois, Holzhauer — who used to live in the city and was educated in its schools — pledged $1,109.14 to the cause “for Alex Trebek and all the other survivors.”

The number is significant for Holzhauer, as astute Jeopardy! fans will know. It’s the birthday of his 4-year-old daughter, Natasha.

Holzhauer was first tipped off about the July 14 event by fundraiser Ann Zediker. She told The Chicago Tribune she reached out to Holzhauer to participate in the event after watching his final Jeopardy! appearance.

That episode began with Trebek extending his gratitude toward Holzhauer for a card his daughter had made. “I want to express my thanks to your beautiful little daughter, Natasha, for having made this get well card for me,” Trebek told Holzhauer. “That was very sweet of her.”

Understanding the pains of pancreatic cancer having lost her father to the disease in 2010 — and knowing Holzhauer’s connection to Naperville — Zediker told The Chicago Tribune that she emailed him and asked him to attend the event (which is organized by the Lustgarten Foundation, the largest private funder of pancreatic cancer research).

In his response, Holzhauer expressed regret that he would not be in Naperville for the walk, Zediker told The Chicago Tribune. But, he revealed he would gladly send a donation.

“There was no expectation on my end,” she told CNN. “I was just thrilled that he responded. I knew that Alex’s story had an impact on him, just like it has an impact on anyone who’s working with a family member who’s going through pancreatic cancer.”

Trebek, 78, has been battling pancreatic cancer for months now, going public with his stage 4 diagnosis back in March.

Although the cancer has a 9 percent survival rate, the Emmy winner has been responding very well to chemotherapy — telling PEOPLE in a cover story in May that he was “near remission.”

“It’s kind of mind-boggling,” Trebek said. “The doctors said they hadn’t seen this kind of positive result in their memory … some of the tumors have already shrunk by more than 50 percent.”

Meanwhile, Holzhauer will return to Jeopardy! in season 36 for the next edition of Tournament of Champions.

Despite not beating Ken Jennings’ regular-season record total winnings of $2.52 million, Holzhauer made history on the syndicated game show as one of only three players to cross the $2 million mark. He dominated the game with a strategy that involved going for all of the high-value questions first, hunting for the Double Jeopardy items, and when he found them, betting all he had.

“Nobody likes to lose,” Holzhauer told The New York Times. “But I’m very proud of how I did, and I really exceeded my own expectations for the show. So I don’t feel bad about it.”