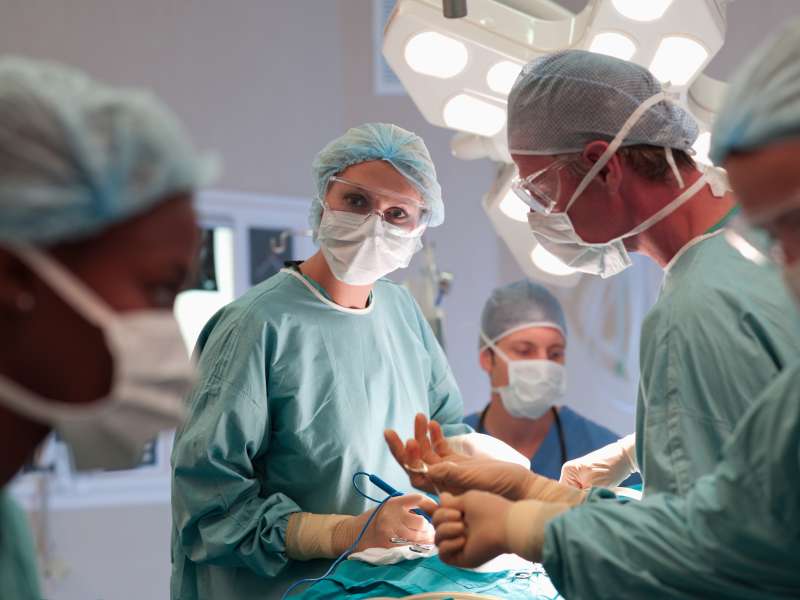 A six-figure job might seem out of reach for many of us. After all, the average annual pay across all occupations is $47,230, according to the Bureau of Labor Statistics. But that doesn’t mean you have to settle for average.

“You want that six-figure salary? Great, go get it,” said career coach Carlota Zimmerman. She advised that you do your research first to find out which jobs come with the best salaries and what path people who are at the top of their fields took to get there.

Doctors who administer anesthesia earn a whopping $246,320, on average — the highest wage listed in the Bureau of Labor Statistics (BLS) database. However, salaries for anesthesiologists can top $400,000, according to a compensation survey by the Medical Group Management Association.

To become an anesthesiologist takes years of school: four years at the undergraduate level, then four more years of medical school. Then, you have to complete four years of residency, possibly followed by a fellowship for another year, according to the American Society of Anesthesiologists.

You can still pull in the big bucks without spending so many years in medical school if you choose to be a nurse anesthetist, who assists anesthesiologists and oversees patient recovery from anesthesia. The average annual wage is $158,900, but top-earners bring in more than $187,000 a year, according to the BLS.

This job requires a bachelor’s degree in nursing, registered nurse licensure, at least one year of acute-care experience in an emergency room or intensive care unit, completing an accredited nurse anesthesia program and passing the national certification exam, according to the American Association of Nurse Anesthetists.

A six-figure salary often comes with that corner office chief executives get. CEOs earn $180,700, on average, but that big paycheck comes with the big responsibility of overseeing the operations of an entire organization.

An MBA often is seen as the ticket to a CEO position, but plenty of chief executives got to their top spots without an advanced degree or even a college degree — the most famous of which is former Microsoft CEO, Bill Gates.

Marketing managers make $137,400, on average, but the top 25% of earners take home more than $171,000 a year. The job involves planning and coordinating marketing programs for organizations, identifying customers and overseeing product development. Most marketing managers have a bachelor’s degree in marketing, communications, business or a similar field.

U.S. News & World Report ranked marketing manager as No. 1 in best sales and marketing jobs because of its high salary, number of positions available in the field and potential for growth.

There’s a growing demand for computer and information systems managers, who are paid an average of $136,280, but can make more than $187,000 per year, according to the BLS. Employment of these managers, who coordinate computer-related activities for organizations, is expected to grow 15% from 2014 to 2024.

Read More: How to Double Your Salary in Two Years

This is one of the top 20 fastest growing occupations because eye problems are common among older adults, who are a growing percentage of the nation’s population. The average annual wage for optometrists is $113,010, but the top 10% of earners make more than $187,000 per year. To become an optometrist, you have to complete a bachelor’s degree and a four-year doctor of optometry program.

Orthodontist ranks No. 1 in the U.S. News & World Report best jobs list. You can make good money fixing crooked teeth — more than $200,000, on average. Plus, it’s a fast growing occupation, according to U.S. News.

You’ll have to spend years in school, though, to become an orthodontist. In addition to an undergraduate degree, you’ll need to go to dental school and get two to three years of additional education in an orthodontic residency program, according to the American Association of Orthodontists.

Employment for surgeons is expected to grow 14% from 2014 to 2024 — a much faster rate than the average for all jobs, according to the BLS. It’s also one of the highest-paying occupations, with an average annual wage of $240,440.

However, you’ll spend years in school and training before pulling in the big bucks. Surgeons must complete four years of college, four years of medical school, then three to seven years in internship and residency programs.

You can make big bucks delivering babies and treating diseases affecting the reproductive system of women. Obstetricians and gynecologists earn $214,750, on average, according to the BLS. Like other medical careers, becoming an OB-GYN takes four years in college, four in medical school, then another four years of residency training.

Pediatrician is one of the top 10 best jobs in U.S. News & World Report’s rankings because of its high compensation, low unemployment rate and employment growth. On average, pediatricians earn $175,400 per year.

Although pediatricians earn less on average than what surgeons and some other doctors make, they have to go through much of the same training: four years in medical school and three years in a residency program. Those who specialize have to spend another two to six years in a fellowship.

Read More: Best (and Worst) States to Buy a Home This Spring

Psychiatrists earn, on average, $182,700 annually, which is one of the reasons it’s one of the top jobs in U.S. News & World Report’s rankings. Plus, jobs in this field are expected to grow by 15% over the next several years, according to U.S. News. To become a psychiatrist, though, you have to complete medical school and a residency program, then complete a licensing exam and board certification.

In the field of dentistry, this is the top-paying job. Oral surgeons earn $219,600 a year, on average, performing surgery and other procedures to treat dental and medical conditions.

To become an oral surgeon, you must complete college, four years of dental school and an oral residency program that can range from four to six years. The six-year route involves a medical degree, according to the American Student Dental Association.

Dentist ranks as the second-best job — after orthodontist — because of its high salary, low unemployment rate and job satisfaction level, according to U.S. News & World Report. The average annual pay for dentists is $166,810, and employment in this field is expected to grow 18% by 2024, according to the BLS.

It takes time to become a dentist, though. After college, you have to attend dental school and a residency program. Then you have to pass state licensing exams.

Financial managers plan and direct accounting, investing and other financial activities for companies and organizations, and can make good money doing so. The average annual pay is $130,230, but the top 25% of earners make more than $159,000.

It’s also a relatively fast-growing job — with employment of financial managers expected to increase 7% from 2014 to 2024, according to the BLS. Typically, you can get this job with just a bachelor’s degree and several years of related experience.

This job involves planning and coordinating activities or research and development in architectural or engineering fields. These managers are paid $138,720, on average, but the top 25% of earners make more than $162,000, according to the BLS.

Competition for these jobs is strong, but employment in this field is expected to grow slightly over the next several years. You need at least a bachelor’s degree and five years of experience to be an architectural or engineering manager.

If you can handle the stress of directing airline flights and traffic at airports, you can make good money as an air traffic controller. The average pay is $118,870, but the top 25% of earners make more than $150,000, according to the BLS.

You need a bachelor’s degree or work experience to become an air traffic controller and must be a U.S. citizen. You also have to pass background and medical checks, and take a course at the Federal Aviation Administration academy.

To become an airline pilot, you typically need a bachelor’s degree, and to complete coursework in physics, aeronautical engineering, mathematics and English. You’ll also need to complete the requisite flight experience and obtain a license from the Federal Aviation Administration.

However, the stress level among lawyers is high, according to U.S News & World Report’s best jobs rankings. However, you don’t have to spend as many years in school as doctors do. After college, you have to complete three years of law school and pass a state’s bar exam and, in most states, pass an ethics exam.

The average annual pay for pharmacists is $118,470, but the top 10% of earners make more than $150,000, according to the BLS. Employment in this field is expected to grow slightly over the next several years.

To become a pharmacist and dispense prescription medication to patients, you must complete college and a four-year doctor of pharmacy degree. You must also pass two licensing exams.

If you love personal finance, you can earn a comfortable wage helping others manage their money better. The average wage for personal financial advisors is $108,090, but the top 10% of earners make more than $187,000 a year, according to the BLS.

The job entails providing advice on investments, insurance, taxes and retirement, as well as estate planning. It’s one of the fastest-growing careers — with the number of jobs in this field expected to grow 30% from 2014 to 2024. To be a personal financial advisor, you need a bachelor’s degree, or higher, and additional coursework for a certified financial planner or similar certification.