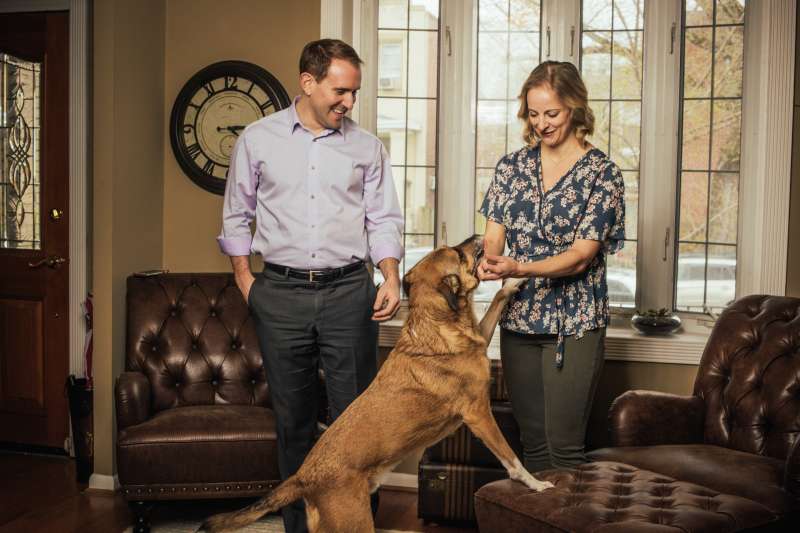 Chris and Danielle Betz with their dog Leo at their home in Washington, D.C., on March 6, 2020.
Stephen Voss for Money

When Chris and Danielle Betz bought their three-bedroom rowhouse in Washington, D.C, last year, they had to stretch to afford the $740,000 purchase price. Since then mortgage rates have tumbled to record lows. For the Betzes — along with thousands of other millennial homeowners — that’s meant a much-needed windfall worth hundreds of dollars a month.

When they closed on their house last July, the Betzes, both in their early 30s, settled a 30-year fixed-rate loan which cost them $3,200 a month and figured mortgage rates would only go up. In fact, a slowing economy and, more recently, fears of the deadly coronavirus, have sent rates to their lowest level in 50 years.

So last month the Betzes decided to jump, trading in their 3.78% fixed-rate mortgage for a 10-year adjustable-rate one at 2.75%. The savings — about $400 a month — will help Chris, a corporate banking associate, get a leg up on his student loans.

“We’re ecstatic we have the chance to pay them off sooner,” he says.

As recently as late 2018 — less than 18 months ago — average 30-year mortgage rates were nearly 5%. That was when the U.S. economy seemed stronger. Since then the Federal Reserve has been steadily cutting interest rates, including the surprise half-point cut earlier this month. Last week mortgage rates hit an all-time low of 3.29%, according to Freddie Mac data.

That’s been good news for homeowners, but especially for millennials who’ve strained their budgets to buy starter homes, while contending with record house prices and other expenses like student debt. A recent report by real estate software company Ellie Mae found that nearly a third of all mortgages issued to millennials in February were refinancings, up from less than one in 10 in mid 2018. Moreover, data from the Mortgage Bankers Association show refinancing applications overall have doubled since last year. “The Fed cut rates three times in 2019, which kicked off heavier refinance activity,” explains MBA’s chief economist Mike Fratantoni.

Given the recent economic uncertainty, including gyrating stock and bond markets, mortgage rates may still have further to fall, according to Fratantoni. “The coronavirus has turned the picture upside down,” he says.

Giving Your Budget Some Breathing Room

Low rates also recently prompted 25-year-old Chase LaChimia, a research analyst at a consulting company, to refinance the mortgage on the two-bedroom condominium in Arlington, Va., he bought with his parents in October 2018.

(LaChimia is one of the many millennial home buyers who have leaned on their parents: TD Bank’s First-Time Homebuyer Pulse report found that about half of millennials said their parents are chipping in by contributing to a down payment, closing costs, monthly payments or co-signing their loan.)

“I was renting a tiny apartment in the area, it was basically a shoe box,” says LaChimia, who upgraded his living space from less than 500 square feet to nearly 900.

Another strategy? “If you have a lot of equity built up in your home, you could do a cash-out refinance and use the money you get to pay off high-interest credit card debt,” suggests Kevin Schatz, a loan officer at Santa Ana, Calif.-based Caliber Home Loans.

That’s a less-common scenario, though, for relatively new homeowners. U.S. home values grew only a modest 3.8% in 2019, Zillow reports, and mortgage lenders typically require cash-out refinance borrowers to retain at least 20% equity in their home after refinancing.

Select Your State to Start Refinancing Your Mortgage
A lower rate could translate to lower payments, which means you’ll pay less for your home overall.
GET STARTED

Should You Refinance Your Mortgage?

While low rates can save you thousands, fees and other hassles mean refinancing is not for every homeowner.

One popular rule of thumb suggests you should aim to lower your interest rate by at least one half of one percentage point. So for example, if you have $390,000 remaining on an original $400,000 loan at 4.25%, refinancing the balance into a new loan at 3.75% could save you $162 a month.

But don’t forget to factor in upfront costs — such as attorney fees, appraisal fees, and title insurance fees — which typically amount to $3,000 to $5,000. In other words, getting a new loan may not make sense if you plan to move in the next two to three years. “Your decision to refinance should be driven, first and foremost, by how long you plan to stay in your home,” says Ellie Mae’s Tyrell.

You can use a mortgage calculator, such as the one on Money’s sister site ConsumersAdvocate.org, to compare the cost of your current mortgage to what you think you might be able to get based on prevailing interest rates.

However, a loan calculator is just a starting point. If you’re serious about refinancing, contact a mortgage lender who can help you evaluate your options, recommends Jeremy Rosenthal, a real estate agent and managing broker at Long & Foster in College Park, Md. A reputable lender should be willing to perform a free refinance analysis that can tell you what interest rate you are likely to qualify for based on factors like your credit score and the amount of principal you’ve accrued in your home, he says.

To qualify for the best mortgage rates, you’ll typically need a credit score of 740 or higher, Schatz says.

Do some shopping around to compare quotes from several lenders, Fratantoni advises — your original lender may not be the one to offer you the best rate and loan terms. Even the difference of a few basis points can make your new mortgage payments more affordable.

(The photo caption in an earlier version of this story misstated the name of the Betzes’ dog. It is Leo not Mazi.)