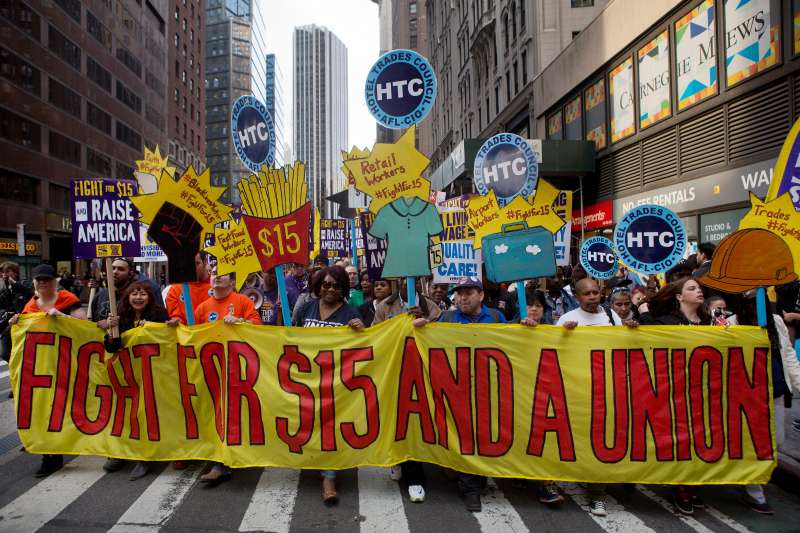 The ongoing push for higher wages in the United States has been piecemeal—state by state, city by city. On Wednesday, the New York State wage board took that incrementalism to the next level, recommending a new $15 per hour minimum wage just for the state’s fast food workers at restaurants with more than 30 locations.

While a final decision is pending (and likely to be a yes vote by the state labor commissioner), the board’s move brings the fast food worker protests full circle. Employees of fast food restaurants first walked off the job in New York City in November 2012 to demand higher wages, specifically $15 per hour. That single demonstration grew into coordinated strikes across the nation and ultimately reached a global scale. The wage board’s recommendation would give fast food workers in New York State a separate minimum wage for the first time. The $15 per hour pay—effective in New York City in 2019 and elsewhere in the state in July 2021—will be a 70% increase from fast food workers’ current minimum wage of $8.75, the statewide rate.

The new minimum wage is unique because it circumvents the legislative process—the state empowers the labor commissioner or a wage board to access whether pay for a particular job is sufficient—and because it contributes to a growing trend of minimum wage hikes that apply only to a specific sector of a state or city’s economy.

In September, the Los Angeles City Council approved an ordinance that gave workers at large L.A. hotels a minimum wage of $15.37 per hour. In June, some home health care aides in Massachusetts won a $15 per hour starting wage after five months of negotiations with Governor Charlie Baker’s administration.

“This is the low hanging fruit model,” says Tom Juravich, professor of labor studies at University of Massachusetts Amherst. “You work politically where you have opportunities.”

New York Governor Andrew Cuomo proposed raising the minimum wage for fast food workers in May with an op-ed in The New York Times. He wrote that “nowhere is the income gap more extreme and obnoxious than in the fast-food industry.” But Cuomo’s targeting of fast food workers through the wage board process came after the state legislature failed to support his effort to raise the overall minimum wage to $11.50 in New York City and $10.50 elsewhere in the state. (New York’s current minimum wage is set to increase from $8.75 to $9 at the end of the year.)

“These are strategic decisions by [worker] activists,” Juravich says. When they see a political opening, they take it. It’s a something-is-better-than-nothing approach. “It’s not that they’re saying other [workers] don’t deserve more money, it’s just that they have a foot in the door,” he says.

Once worker activists break down a door in one industry, they hope to go onto the next, Juravich says. That domino effect will get a jolt if—say a few years from now—an industry-specific minimum wage hike has not caused catastrophic consequences in terms of employment. In that sense, sectorial minimum wage hikes are just another aspect of the incremental movement for higher pay that’s sweeping the nation as a comprehensive wage hike fails at the federal level.

Right on cue, the Fight For $15 organization that’s backed by the SEIU released a statement Wednesday championing the wage board decision and announcing that it has protests scheduled to take place in Tampa and a few other cities on Thursday.