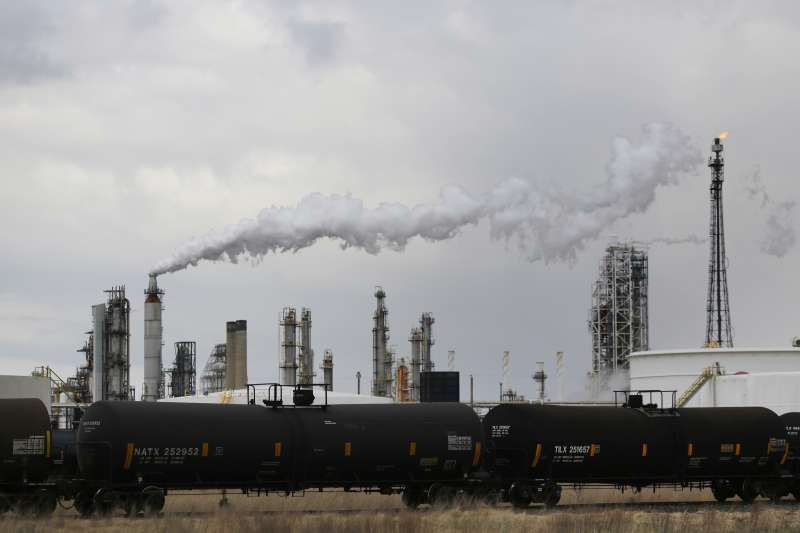 Oil prices jumped about 3% on Wednesday, hitting new highs for 2016 as the dollar weakened after the Federal Reserve announced it would leave U.S. interest rates unchanged.

Oil had risen early, the day after an industry group said U.S. crude inventories had dropped in the latest week. But prices retreated after the U.S. Energy Information Administration reported in the morning that crude stocks climbed 2 million barrels last week to an all-time peak of 540.6 million barrels.

A Reuters poll of analysts had forecast a build of 2.4-million barrels.

In early afternoon, the Fed announced it was leaving interest rates unchanged, and issued a statement implying it was in no hurry to raise rates. Futures of Brent and U.S. crude’s West Texas Intermediate (WTI) surged minutes before settlement, hitting new peaks for the year as the dollar sank to session lows.

“Bullish momentum from a technical perspective, in cahoots with dovish Fed rhetoric, has this market on fire again despite the crude inventories we’re seeing,” said Matt Smith, director of commodities research at New York-headquartered Clipperdata.

Declines in the dollar make oil and other commodities denominated in the greenback more affordable to holders of other currencies.

Futures of heating oil, also known as ultralow sulfur diesel, jumped 3% as stockpiles of distillates , which include ULSD, fell much more sharply than expected, the EIA data showed.

Some traders said crude’s rally was overdone, and warned that higher prices could encourage more production which would aggravate a global supply glut.

Brent has gained more than $20 a barrel, or nearly 75%, since hitting 12-year lows in late January. For April, it is up 19% heading for its largest monthly gain in a year.

“With crude inventories building and the Saudis still pumping at record levels, we feel the recent run-up has been mainly fueled by the weakness on the dollar,” said Tariq Zahir, trader and portfolio manager at Tyche Capital Advisors in New York.

The prospect of a production freeze among the world’s largest oil exporters evaporated almost two weeks ago after a meeting between OPEC and Russia ended in stalemate.