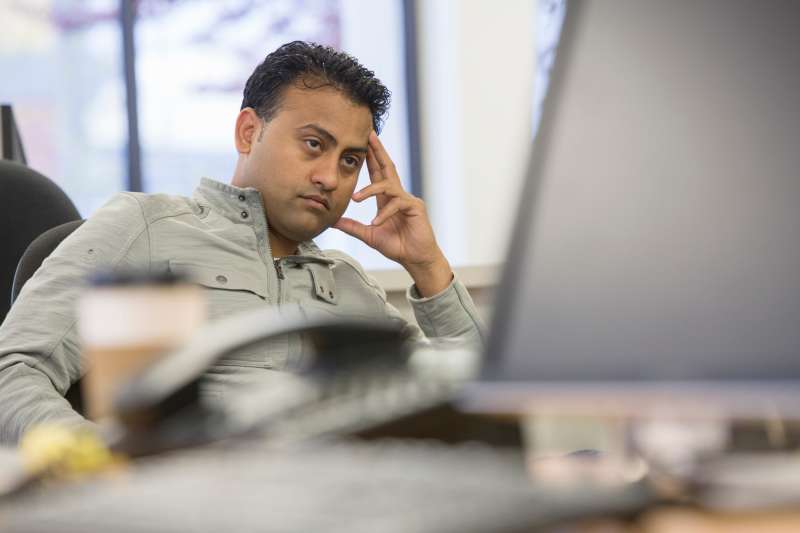 If that snippy coworker is being passive-aggressive in an email (again!), resist the urge to send an equally snarly response.

“The goal of the passive-aggressive person is to get someone else to visibly act out the anger that they have been concealing,” social worker Signe Whitson, author of “The Angry Smile,” told Business Insider. “Any time their covertly hostile email is responded to with overt hostility, the passive aggressive person succeeds.”

Don’t fight fire with fire. If you do, you’re just falling into the passive-aggressive person’s trap.

Instead, Dr. Neil J. Lavender, author of “Toxic Coworkers: How to Deal with Dysfunctional People on the Job,” said you should focus on what you need to do to complete the task at hand, rather than “majoring in the minors.”

“If the email is requesting you to turn in a report, then turn it in. If you need to return a phone call, then return the phone call,” Lavender told Business Insider. “Don’t get ‘mired in the minutia.'”

Adobe found the nine most-hated passive-aggressive email phrases in a recent survey. Below, take a look at some key phrases you can use to diffuse the situation when one of those emails lands in your inbox.

‘Not sure if you saw my last email’

With 25% of workers saying this is the most annoying email phrase, “Not sure if you saw my last email” was by far the most disliked phrase in Adobe’s survey.

Lavender suggested beginning your note with, simply, “Thank you, I did receive your last email and…”

‘Per my last email’

Whitson recommended leading your response with an equally brief, “Thanks for the reminder.”

This might be a sign that your worker is trying to create a paper trail from your in-person talks.

“A simple, ‘Thanks for the recap’ will go a long way in keeping a friendly workplace and rising above someone else’s covert anger,” Whitson said.

‘Any update on this?’

A tenth of workers told Adobe that “Any updates?” is the most annoying phrase used in emails.

“(I)n the business world, where most of us are juggling 1,000 balls every day just trying to get through, I really wouldn’t take the time to try to analyze the ‘real hidden meaning’ behind the tone of every email statement,” Lavender told Business Insider.

Just be honest, Lavender said, and tell them what the updates are.

If there are no updates, Whitson suggested writing back, “I don’t have any updates at this time but I will email you as soon as I do.”

‘Sorry for the double email’

Whitson said you should acknowledge their persistence, instead of getting angry at them for filling up your inbox.

“I have received both of your emails and will respond as soon as I have an answer for you,” she recommended writing.

Lavender suggested a different route that acknowledges their apology (even thought it likely wasn’t made in earnest): “Thank you, I did notice that. I accept your apology, no problem.”

This phrase has several different meanings, according to Grammarly. It could mean “Let me know,” “I need your advice,” or “I’m waiting for your response, and have been waiting.”

Not only is it vague, but it’s often perceived as overly formal.

Still, you can’t do anything if your coworker keeps sending this phrase to you. If they’re asking for your advice, Lavender suggested responding, “Will do. I’m currently working on the solution and should have it for you by (insert date or time).”

If you can’t advise, explain why.

Similarly to “Per my last email,” try simply responding to this type of email with, “Thanks for the reminder.”

“Don’t jeopardize your own professionalism by replying with the first sarcastic thought that pops into your mind, such as, ‘Oh, did you state that previously? I must have missed it because you talk so much that I usually just tune you out,'” Whitson said.

“Don’t mirror the hostility by replying, ‘Not sure if you realize how busy I am,'” Whitson said.

Instead, go with, “Thanks for the recap of our last conversation.”

Whitson recommended this respectful response: “I appreciate that you re-sent the document.”

If there’s an ongoing pattern of passive aggression, sit down with your coworker

Everyone has their off days and may accidentally dash off a snarky email to their coworker.

But if the passive-aggressive remarks keep coming, you may want to sit them down to understand what’s happening on their end.

Lavender suggested sitting down with your coworker and directly asking: “Are you angry at me? Is there something you would like me to do differently?”

Most likely, Whitson said, the coworker will deny that they’re upset. But they’ll probably change their behavior now that they’ve been confronted.

“Your respectful acknowledgement marks a change in the dynamic,” Whitson said. “The passive-aggressive person now knows that you are a straight shooter who will not shy away from trying to resolve a conflict.”

This article originally appeared in BusinessInsider.com.