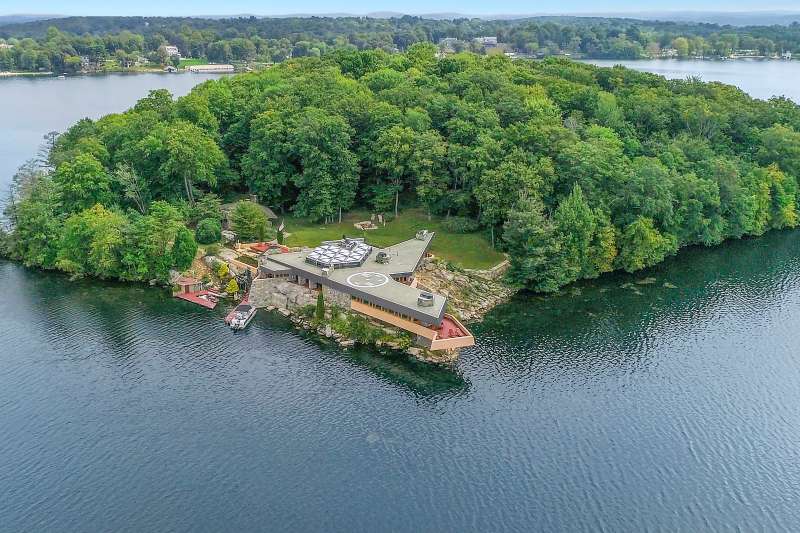 If you’re a fan of prolific architect Frank Lloyd Wright, you might say his best work is also his most iconic—Fallingwater in Pennsylvania or the Guggenheim Museum in New York, for instance. If you’re an architecture buff with a thing for islands, however, you might want to take a look at this little-known gem of a project in Carmel, New York.

Located in the middle of a 593-acre lake, Petre Island is a privately owned residence sporting three separate homes—two of which are designed by none other than Frank Lloyd Wright. According to Curbed, however, the authenticity of at least one of those homes is questionable. Legend has it that the prolific architect had originally drawn up plans for a 5,000-square-foot main home for the island, but the when the island’s owner ran out of money, Wright was forced to switch gears and build a 1,200-square-foot cottage instead.

That original ‘50s-built cottage still stands. Today, however, there’s also the 5,000-square-foot masterpiece Wright had originally imagined for the island. In 2007, current owner Joseph Massaro commissioned an architect and Wright scholar to realize Wright’s vision based on his original drawings, floor plans, and other documents that came with the property.

The two houses now stand side by side on the five-acre island, rife with design details that recall the late architect’s signature style. (The Frank Lloyd Wright Foundation, however, refuses to recognize the newer home as a Wright original.)

In the main house, Wright’s penchant for organic architecture that seamlessly blends with nature is evident in the exposed rock that shows up as accents throughout the home. Like Fallingwater, it also features dramatic cantilevers, including a living space that extends out 28 feet over the lake. In both homes, wraparound windows and latticed skylights allow as much light to flood in as possible.

They also, of course, help showcase the homes’ spectacular location. As an oasis in the middle of a lake, Petre Island is surrounded by nothing but water and lush greenery (it also has its own beach). Accessible only by boat or helicopter, the atoll is a true escape for the lucky person who owns it.

Could this lucky owner be you? If you have $12.9 million, it sure can. Petre Island is currently on the market with Douglas Elliman for a just-shy-of-$13 million price tag. Worth it? We think so. See more of this stunning private island below: