4 Things to Know About the Senate's Health Care Bill 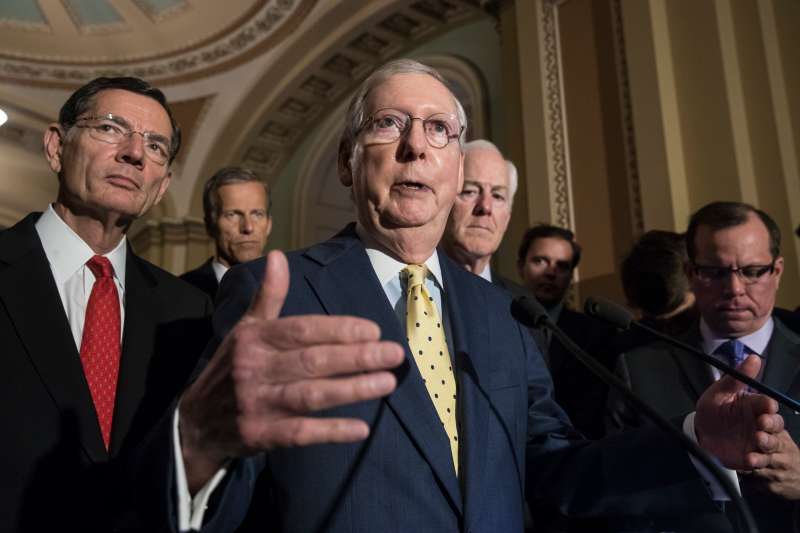 The Senate on Thursday finally unveiled draft language for the Better Care Reconciliation Act, its replacement for the 2010 Affordable Care Act. Like its predecessor, the House’s American Health Care Act, the proposal would jeopardize coverage for lower-income and middle-class Americans in order to deliver big tax breaks for the wealthy.

The most dramatic changes in this initial Senate version of the BCRA, which was crafted in secret by a select group of officials over the past month and a half, include a roll back of the Medicaid expansion and significant funding cuts to the program, and the elimination of taxes that the ACA imposes on health insurers, tanning salons, medical-device companies, certain investment income, and an additional 0.9% tax on individuals who earn more than $200,000 a year. It also defunds Planned Parenthood for one year.

Early next week, the nonpartisan Congressional Budget Office is expected to release estimates of the draft’s effects on premium costs and coverage, along with the overall impact on the federal budget. One thing stands out already, though: it’s likely to reduce the number of insured Americans by tens of millions relative to the ACA.

The draft also eliminates the ACA’s individual mandate, which required that most Americans have health insurance or pay a tax. It retains the popular ACA provision that young adults can remain on their parents’ plan until age 26 and also funds cost-sharing reductions, which reduce out-of-pocket costs like deductibles for lower-income consumers, through 2019, but then discontinues them. It also provides $62 billion in state grants to stabilize the insurance markets in the short term.

Critics slammed the Senate’s efforts. “Their driving strategy here isn’t good health care policy, it’s getting 50 votes,” says Joan Alker, executive director of the Georgetown Center for Children and Families. Senate Majority Leader Mitch McConnell has said he wants to bring a bill before the full Senate for a vote next week, and Republicans need 50 votes for it to pass, with Vice President Mike Pence casting the tie-breaking 51st vote.

Here are four big changes the BCRA makes to the ACA that could affect your wallet:

The Senate draft would phase out Obamacare’s expansion of Medicaid, which raised the income threshold for eligibility in this government program and brought coverage to roughly 11 million low-income adults as a result. Federal funding would be gradually reduced from 2021 through 2023, and starting in 2024 the threshold for new Medicaid beneficiaries would drop below the expansion ceiling of 133% of poverty, or roughly $16,000 for an individual. Under the Senate bill, people at the poverty line would newly become eligible for premium subsidies to buy marketplace insurance, but it’s not clear that they’d be able to afford it even with the premium help, says Caroline Pearson, senior vice president at Avalere, a health care consulting firm.

Beyond this change, the Senate bill would radically restructure all parts of Medicaid—not just the expansion provided under the Affordable Care Act. Conservative members of Congress are taking advantage of the health care bill to enact their long-standing desire to rein in what they see as a costly entitlement program.

Their efforts would have far-reaching effects on the roughly one in five, or 73 million, Americans that the program insures. Americans insured by Medicaid include low-income adults, children, people with special needs, elderly people receiving long-term care, and pregnant women. Medicaid covers nearly half of all births in America, and around half of long-term care for the elderly and disabled.

It’s unclear exactly how much Medicaid funding would be cut under the Senate bill, since it hasn’t been scored yet by the CBO. Yet the House version cut nearly $840 billion in federal Medicaid funding through 2026, according to CBO estimates, and the Senate version is “harsher” than the House version, Alker says. The draft would switch Medicaid from an uncapped program that can increase funding to pay for both crises like the opioid addiction epidemic and new drugs and treatments, to a capped program. What’s more, starting in 2025, Medicaid spending would only be allowed to rise at the rate of general inflation, a rate much lower than needed to keep pace with rising health care costs, experts say.

These cuts would “starve” Medicaid, says Edwin Park, vice president for health policy for the Center on Budget and Policy Priorities. To cope, states will be forced to make difficult choices: raise taxes to cover the federal shortfall, cut benefits to recipients or payments that Medicaid makes to doctors and hospitals, or cut other parts of their budget, like education, to siphon money to health care, or a combination thereof.

The cuts to Medicaid will help offset the lack of money generated by the tax cuts.

Essential health benefits, the 10 categories of care that the ACA required all insurance plans to cover, such as prescription drug coverage, maternity care, and hospitalization, would be eliminated in Medicaid plans come 2025. In this draft, at least, essential health benefits remain untouched in exchange plans.

According to news reports, however, Republicans are planning to introduce waivers into the final bill that’s brought before the Senate. These could allow states to waive certain ACA protections, including the requirement that plans pay for a robust slate of essential benefits.

What would this mean? According to Kaiser, many people would likely lose access to maternity care and mental health care as part of their insurance plans, if insurers were no longer required to cover them: 75% of non-group market health did not cover delivery and inpatient maternity prior to the passage of the ACA.

Even if the final bill doesn’t expressly include waivers, it’s possible that the draft released on Thursday would still give states the flexibility to waive certain requirements, Pearson says. That’s because it removes the “guardrails” that the ACA imposed on certain state actions. By expanding state flexibility under section 1332 of the ACA, Thursday’s draft would appear to allow states to waive essential health benefit requirements, Pearson says.

The BCRA retains the popular ACA provision that people with pre-existing conditions cannot be charged more for insurance because of their health status. However, weakened essential health benefits would hurt people with pre-existing conditions. If plans in a waiver state no longer needed to cover chemotherapy, for example, then someone with cancer could still buy a policy, but it wouldn’t help them get treatment. Or, if the plan did cover chemotherapy — or maternity or mental health care — it would charge much more for that coverage.

According to a report from the National Women’s Law Center, just 12% of individual market plans included maternity coverage before the ACA was passed. Women who wanted maternity care could purchase an additional rider, some of which had deductibles as high as $10,000 and waiting periods as long as a year before coverage could be access, the organization found.

The House’s version of the health care bill linked subsidies to help people buy insurance simply to a consumer’s age (an amendment was later added that scaled the subsidies back once individuals and families reached a certain income level). Like the ACA, the Senate version links to premium assistance to both age and income.

This means far fewer people will qualify for aid. (Charles Gaba, who runs ACAsignups.net, estimates around 400,000 consumers who currently receive subsidies fall between 351% and 400% of the FPL.)

Thursday’s draft also prohibits the use of subsidies to pay for plans that cover abortions (immediately, not in 2020). The ACA pegged premium subsidies to silver plans that covered 70% of consumers’ total medical costs, while the Senate bill would lower the benchmark plan’s value to just 58% of costs. This means that plans would cover less, and while people may pay less in premiums, they would pay more in deductibles, co-pays, and co-insurance. “The government is subsidizing skinnier benefits,” Pearson says.

And for older enrollees, while the ACA allows insurers to charge older people up to three times what they charge younger people, the BCRA would increase that ratio to 5:1, or a different ratio “as the State may determine,” meaning older people could face rates six or seven times as much (or more).