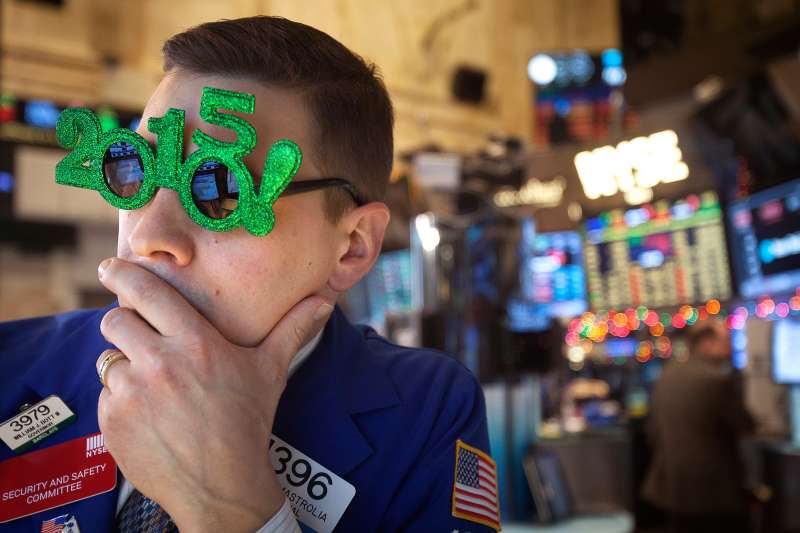 Trader Joseph Mastrolia works on the floor of the New York Stock Exchange while wearing 2015 novelty glasses on New Year's Eve, the last trading day of the year, in New York December 31, 2014.
Carlo Allegri—Reuters via Corbis

Up until now, the bull market seemed to defy the everyday experience of many Americans: As Main Street households struggled through a recovery that repeatedly fell short of expectations, investors on Wall Street rejoiced.

That’s because the economy was growing fast enough to justify higher share prices, but not so fast that inflation was viewed as a real threat.

This year, though, the script seems to be flipped.

Monday’s dive was driven by two major economic trends that on the surface should be a boon for U.S. consumers. First, oil prices continued their sudden and surprising slide, driving prices at the pump down with them.

At the same time, the U.S. dollar is now at a nine-year high against the struggling euro. That bolsters the purchasing power of Americans traveling abroad and U.S. consumers purchasing imported goods.

Thanks to both trends, auto sales last year reached their highest level since before the global financial crisis.

Yet none of this is moving the dial on stock prices so far in 2015.

Some analysts think this could be a recurring trend throughout this year. “Expect a good year on Main Street but a more challenging environment for Wall Street,” says James Paulsen, chief investment strategist for Wells Capital Management.

Before, lukewarm news on the economic front bolstered the hope that the Federal Reserve would keep interest rates near zero for the foreseeable future. Now, some investors worry that the forces causing oil prices to fall and the dollar to rise — the weak global economy abroad — may be too much for the Fed to tackle even if rates stay low throughout this year.

Moreover, falling oil prices and the strengthening dollar may be giving the market false hope about low inflation.

“Some have argued that lower oil prices give the Fed more room to maneuver. This is a mistake,” says David Kelley, chief global strategist for J.P. Morgan Funds.

While it is true that lower energy prices are reducing inflation in the near term, “falling oil prices are also a big boost for consumers,” Kelly said. “Even if gasoline prices were gradually to move up to $2.75 a gallon by the end of this year from $2.39 at the end of last year, consumers would spend roughly $90 billion less on gasoline in 2015 than they did in the 12 months ended in June 2014.”

Not only is this a financial boost, “it is also a psychological positive with sharp increases seen in consumer confidence readings in the last few weeks,” Kelly said. “This should power an increase in consumer demand which should, in turn, boost prices in other areas.”