The 19 Most Lavish Hotel Bars in the World 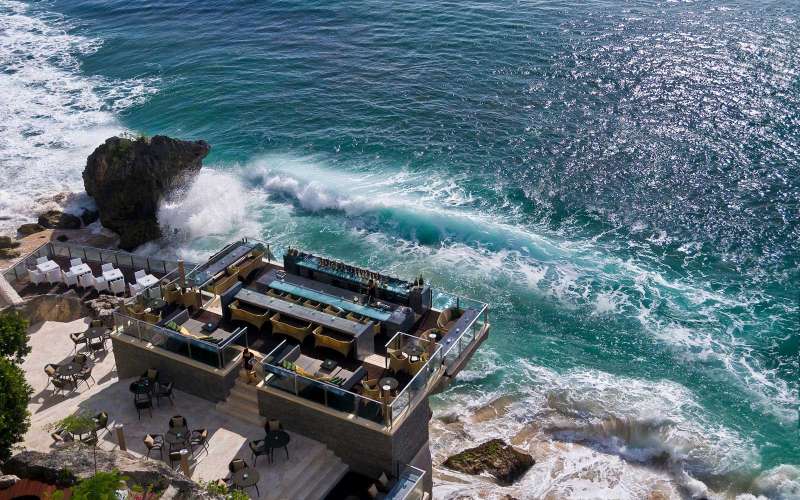 No hotel is complete without a good hotel bar.

As hotels aim to attract both travelers and locals, there’s been a renewed appreciation for the hotel bar. It’s no longer a stuffy place where businessmen gather for a drink before going to bed. Bars offer a chance for hotels to show off their hospitality while hosting some of the best parties in town.

From Tokyo to Tanzania and rooftop pools to stargazing safaris, these are 19 of the hottest hotel bars around the world.

The rooftop bar at the PUBLIC New York quickly cemented itself as one of the city’s hottest nightlife spots after hosting a roster of fashion week events earlier this year. Although some may believe that The Roof’s best asset is the floor-to-ceiling glass windows with panoramic city views, the people you’re likely to run into make this hotspot one of the coolest destinations in town.

Courtesy of The Ritz-Carlton, Moscow

Get one of the best views of Moscow at this rooftop lounge and bar. The O2 Loungeoverlooks the capital’s Red Square with direct views of the Kremlin. A glass enclosure ensures that visitors can still have access to the rooftop’s views without having to endure the harsh Moscow winter.

Guests can of course drink at the Alvear Palace’s lobby bar (where businessmen and celebrities have been holding meetings since the 1930s), but the cool, young crowd is more likely to be found on the newly renovated roof, at the Alvear Roof Bar’s.

Courtesy of Rock Bar at Ayana Resort and Spa

To even reach the Ayana Resort’s Rock Bar, guests have to ride a cable car down a cliff face. Once they’ve arrived at the bar — perched 46 feet above the Indian Ocean — guests can sip cocktails while watching the sunset or dance to music from the DJ booth carved into stone.

This Bangkok bar is world-famous for good reason. Perched 820 feet above the ground, the bar is one of the highest in the world. It also has a lengthy creative cocktail menu, including the Hangovertini, created for the cast of “Hangover 2” when they stayed at Lebuato film.

When temperatures rise in Mexico City, the cool set rise to this rooftop pool and bar. While the vibes are more relaxed during the day, at night, a DJ arrives and this Polanco hotspot transforms into one of the best parties in town.

Hanoi may not have many upscale cool bars, but what the city lacks in quantity, it makes up for with quality at the Metropole. The hotel attracts some of the city’s most powerful visitors and the coolest among them will eventually make their way to the property’s more casual space, the poolside Bamboo Bar.

Patrons at The Carousel Bar may have the distinct impression that the room is spinning — even if they haven’t indulged in one of the hotel’s signature sazeracs. The 25-seat bar is a former merry-go-round that has been twirling at the Hotel Monteleone since 1949.

At first, the vibes at the Taj’s Blue Bar may seem cosmopolitan enough to be from any major city in the world, but take a step out to the poolside area and instantly remember that the cool bar is in the bustling center of New Delhi.

Courtesy of The Willaston

The Willaston Bar at The Silo, Cape Town, South Africa

As Cape Town attempts to cement its status as a world art destination, the Willaston Bar could be where the arty flock start to head. It’s located in the newly opened Silo Hotel, whose building is also home to Zeitz MOCCA (Museum of Contemporary Art Africa). Head to the sixth floor bar for a post-museum drink overlooking the water.

Courtesy of The Standard

The Rooftop at The Standard Downtown, Los Angeles, California

If you’re willing to wait in line and brave a night time cover charge, you’ll meet plenty of cool, young locals at this astro-turfed rooftop bar in DTLA. The bar is steeped in ‘60s nostalgia with colorful, plastic furniture and animal-shaped topiaries but the vibes are modern, with a DJ and heated pool.

When the girls from Ipanema go walking, there’s a likely chance they end up here. This Rio hotspot is consistently named among the world’s most exclusive bars — so those attempting to get in should be sure to dress up and make a reservation well in advance.

This music city newcomer not only draws hotel guests out of their rooms but locals out of their homes. The beer selection focuses on local, southern brews and the small bites menu adds a kick of cool to southern classic (see: korean fried chicken sliders). Go on a Monday night when Jack White’s record label, Third Man Records, hosts a weekly vinyl night that brings cool kids to the rooftop bar for danceable deep cuts.

Courtesy of The Chandelier at The Cosmopolitan Las Vegas

The Chandelier at The Cosmopolitan, Las Vegas, Nevada

Considered by some to be the world’s largest chandelier, this multi-level bar is one of the coolest spots in Vegas, if only for its architectural marvel. The lower level of The Chandelier is open 24 hours so the party never has to stop. The bar is also famous for its “secret drink,” the Verbena. It starts as a citrusy margarita that transforms flavors after you eat an edible flower inside the glass.

Ever since Scarlett Johansson and Bill Murray drank here in the film “Lost in Translation,” this bar in the skies has been on countless “must see” Tokyo lists. Because of the bar’s prime real estate (the 52nd floor in a Shinjuku building), it’s also got some of the best views of the city skyline.

When the art crowd descends to Miami for the Art Basel festival, they know there’s a very good chance they’ll end up at the Living Room Bar at least once. The lobby bar’s downtown beachside vibes — alongside art from Andy Warhol, Jean-Michel Basquiat and George Condo — make it a top destination.

Courtesy of Gold On 27

The Burj Al Arab in Dubai is known for being many things. Understated is not one of them. The Gold on 27 bar, which opened last year, is decked out almost entirely in gold (as the name may suggest). And getting in requires some preparation. Entrance is limited to hotel guests and those with reservations only.

This article originally appeared on TravelandLeisure.com.