This Woman Lives on a Boat to Avoid San Francisco Rent 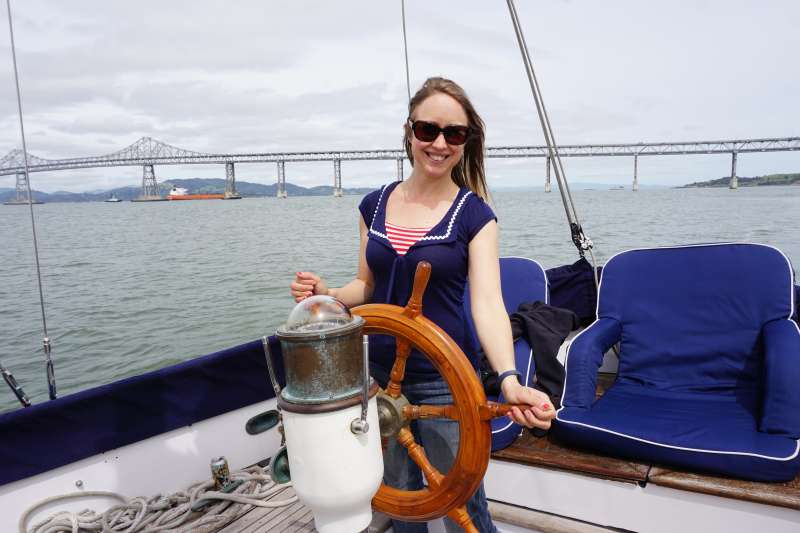 Imagine living in one of the most expensive cities in the world — without paying rent. The only catch? You have to live on a boat.

Kristin Hanes, a former reporter who blogs at The Wayward Home, decided to embrace this unique lifestyle in 2015. She left her studio in Mill Valley, a picturesque town in the Bay Area, to live with her boyfriend in a car — and later, a sailboat — in order to save on rent, pay off debt and have the adventure of a lifetime.

They haven’t looked back. Here’s her story, as well as tips for people who are considering forgoing traditional housing to save money.

Where were you living before? What sparked the idea of living in a car and tent?

In 2015, I was paying around $1,800 a month by renting a small studio apartment in Mill Valley. I met my boyfriend, Tom, who was living on the same property as me. We were hiking one day and he said, “Imagine how much we could save if we weren’t living here.” I was spending more than $20K per year on rent, and I also had this lingering debt at the time.

How did you make the transition from living in your apartment to a car?

Tom started living in his Prius first. I thought he was crazy, but I started joining him on camping trips and thought it was fun, so I gave my 30-day notice to my landlord. I thought I could help pay off some debt and have a little adventure.

We camped around the Bay Area, and on weekends we would go backpacking at Yosemite. We joined a gym in the city so we could shower and use their internet. We also had a storage unit where we could relax and play music. We did this for four months.

How did the sailboat enter the picture?

After living in the car for four months, I went back to renting a room in a big floating home in Sausalito that I shared with another woman. That’s when I got laid off from my job at KGO Radio. I knew I couldn’t afford $1,400 per month rent if I was going to be freelancing.

Luckily, Tom had gotten his sailboat and was restoring it. The sailboat is 150 square feet, which is smaller than the floating home, but much bigger than the car.

Were there any initial challenges on the boat?

When we first moved to the boat, it was a work in progress. We didn’t have a stove, running water or a toilet. It was project after project. It also wasn’t sailing at the time, so we were not enjoying it as a boat.

Now that we have amenities in place, it’s so much easier. We can leave the marina whenever we want and be out in nature. That part of it — being away from the city — is really amazing.

What are your expenses now that you live on the boat?

Tom has a full-time job and it’s his boat, so he’s been the one fronting the bills for the projects. We splurge on a gym that is $215 a month, but I chose it because I can get a workout and a place to sit and use the internet. It’s cheaper than other co-working spaces. I cook most nights on the boat. Propane lasts us for months, and our utility bill is only $5 a month. We remind ourselves how much rent used to cost. We can live on this boat for a very long time, and we’ll end up saving money in the long run.

What do you do for a living?

After I got laid off in 2016, I started my blog, which is one stream of income. My blog is a place where I interview people living alternative lifestyles and write about living on the boat. I also do a lot of freelance writing and copywriting. I’m trying to build a freelance writing career that allows me to be mobile. The flexibility to work on what I want, pitch magazines I like, travel and see the world is really amazing.

Can you describe a typical day on the boat?

My boyfriend goes to work at 7:30 a.m. I head straight to the gym since they have free coffee. I start working and do a workout class around noon, work some more, and then come back to the boat between 4 and 5 p.m. for dinner. At night we’ll watch shows that we get from the library. Sometimes I’ll pet sit to make supplemental income and to enjoy being in a house.

What have you and your boyfriend learned from living on the boat?

I’ve gotten used to living with less. I put all of my clothes in the truck, so my wardrobe is really minimal, and I wear the same things. It’s helped me change my mindset.

As for our relationship, being in a small space means that having time apart is crucial. I’m from Portland, Oregon, and I love going there once a month by myself for a week to visit friends and family. It’s important to have space to miss each other.

Do you have advice for people who are thinking about living this way?

I’m seeing a lot of people do this. Housing is insane, and it’s becoming more of a lifestyle choice. But it’s not for everyone. Sailboats are a lot of time and work. If you want to be a nomad, maybe start with a van. A van is my dream for land exploration.

You don’t have to make a drastic change. It’s important to find a house that is the right size you and your family, whatever that means for you. Some people can live comfortably in a RV or boat, while others can simply downsize to a 1,200-square-foot house.

What are your future plans? How long do you plan to live on the boat?

One of our dreams is to figure out an environmental purpose for the sailboat. We’re thinking of going to a Hope Spot to create awareness around overfishing and saving sharks. That’s in our hearts.

Otherwise, we just want to see the world and go on adventures. Our tentative plan is to sail to Mexico this winter. What’s fun about the sailboat is that it’s a floating home, so we can take it around the world without staying in hotels or Airbnbs. Neither of us know how long we want to live here, but we have no desire to buy or live in a house again.

This article originally appeared in NerdWallet.