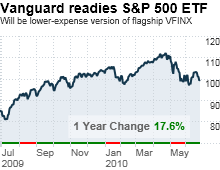 Vanguard announced last week that it is dramatically expanding its lineup of exchange-traded funds (ETFs) by adding 20 new entries. The newcomers will include an ETF version of its $19 $91 billion Vanguard 500 Index fund [fortune-stock symbol=VFINX” target] — the very first index fund for individual investors — which has been long delayed due to a licensing dispute with Standard & Poor’s. With that issue evidently resolved, this ETF will charge just 0.06% — the lowest cost for an S&P 500 ETF. The new funds, which raise Vanguard’s total ETF offerings to 66, are expected to launch in the fall.

The new ETFs put intense pressure on Vanguard’s rivals, which have been aggressively cutting fund fees to gain market share. Last year Charles Schwab cut expense ratios and removed trading commissions on all of its ETFs. And in February Fidelity stepped up its game by waiving fees on 25 iShares ETFs. Vanguard, in turn, eliminated ETF trading fees for its brokerage customers last month. Among ETF providers, State Street and iShares still dominate, ranking number one and two in assets respectively. But Vanguard, which ranks third with $103 billion in assets, is growing more quickly, with a $14 billion increase in assets so far this year.

All this competition means an even better deal for retail investors. Vanguard’s improved lineup, which includes an international real estate fund, muni bond funds, and value- and growth-style stock funds, will allow you to assemble a more diversified portfolio using ETFs. All Vanguard’s ETFs charge fees that are among the lowest in their categories, ranging up from the S&P 500 rock-bottom 0.06% to 0.35% for the foreign real estate fund.

Still, there’s no reason for you to jump in right away. As with any new ETF, you are better off waiting to see if it attracts sufficient assets and trading volume to enable you to buy and sell at a good price. You also want to make sure that the ETF has an established record for closely tracking its benchmark. Meanwhile, there are plenty of good ETF choices out there, including those on our Money 70 list of recommended funds. And for long-term investors, regular index mutual funds — low-cost, of course — remain an excellent option.