5 Signs It's Time to Leave Your First Job 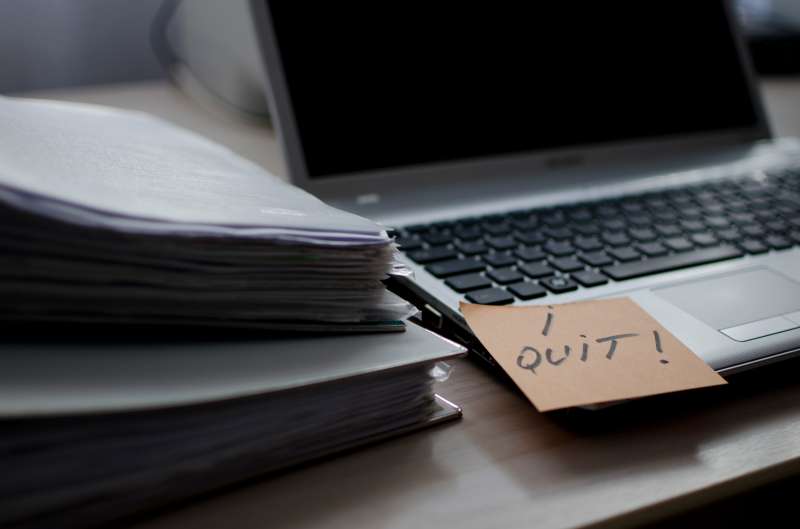 Your first job out of college won’t be your last, but how will you know when it’s time to bow out?

“If you ask 10 people that question you’ll have 10 different answers on that,” says Jeff Reep, director of career services at Cedarville University in Ohio. “It could mean three to five years, or if the situation warrants, even after a year.”

About 33% of millennials surveyed recently by crowdsourced talent acquisition platform RecruitiFi said they planned to stay in their current jobs for three to five years, while 20% said they would leave after one to two years.

There’s no one-size-fits-all answer for how long you should stay at your first job, but experts say there are a few key signs that signal it’s time to make a career move.

As you work you might find you’re not a good fit for the company culture or you see little upward mobility in your future. However, experts say there’s a difference between a lack of opportunity in a position and a lack of your own moxie.

“I hear a lot of young professionals tell me there’s not enough opportunity. I ask them, ‘What does opportunity look like to you?’ ” says Christine DiDonato, founder and president of Career Revolution Inc. in San Diego. Ask your boss for mentorship or guidance rather than waiting for it to be given to you, she adds.

But working for a company that can’t support your career path? That’s a different story.

“If you’ve asked your boss for opportunity, you’ve gone above and beyond and have taken on responsibility no one asked you to do and you feel in four or five months that you’re not challenged at all, then you’re in a place that doesn’t have the right opportunity for you,” DiDonato says.

You’re in the wrong field

Your first job is an opportunity to learn more about your chosen field and figure out how you might fit into it — if at all.

“If you’re in a banking job and realize banking isn’t for you, then you might not want to stay and learn more about banking,” says David DeLong, author of “Graduate to a Great Job: Make Your College Degree Pay Off in Today’s Market.” If the field isn’t exactly what you hoped for, but the general skills you’re learning are helpful, then sticking it out for longer isn’t a bad idea, he adds.

You’ve learned all that you can

Before leaving a job, consider the skill set and experience you want to be able to present to a future employer. “Sometimes people have to step back and think about what is the career journey they want rather than just immediately think about the destination,” says Sridhar Balasubramanian, associate dean of the full-time and online MBA programs at the University of North Carolina’s Kenan-Flagler Business School.

Balasubramanian suggests staying at a job that aligns with your existing skill set and experience to learn all you can from it. “Once you’ve established some street cred, then that might be the chance to move forward to the next job,” he says.

Work long enough to show you have learned through accomplishments, says Randy Rosenberger, a professor of accounting, business and economics at Juniata College in Huntingdon, Pennsylvania. He adds, “Depending on the industry and the kind of work you’re doing, that could be a promotion or two to show that. It might mean completion of a project or two. It’s always better if you can show whoever might hire you next what you’ve done.”

You have a sound opportunity elsewhere

Your first job is probably not your dream job. If an ideal opportunity presents itself, then that could be your ticket out.

Michael Berkowitz, a 2010 marketing graduate of Yeshiva University’s Sy Syms School of Business, knew it was time to leave his position at a commodities firm when he decided to pursue a more entrepreneurial venture. From there he worked at a hedge fund while starting up Norwegian Wool, an upscale fashion company that sells a line of coats for men. Now he’s heading Norwegian Wool full time.

He didn’t make the decision to start a business lightly, Berkowitz says, and strongly credits his first positions for giving him skills that are still useful in his current venture. “You can switch the environment, but you’ll find out business is business and a lot of things carry over and [you’ll] learn. That’s very valuable,” he says.

You’re in a toxic situation

Not liking your boss might make it easier to leave, but it should not be the sole reason to jump ship. A truly toxic environment is a different story. “Toxic never means you’re working too hard or you don’t love the work. Toxic is working with people who are truly dysfunctional, mean, passive-aggressive or abusive in some way. It means emotionally toxic,” DeLong says.

If you’re going to leave, then leave quickly, Balasubramanian suggests. “Ultimately, the toxic environment will grow on you and you’ll be jaded by the time you go to the next job,” he says. “If you were at a job for 15 days to a month, you could say it wasn’t a good fit. That’s an honest answer that could be well appreciated by someone.”

Expect some resistance from future employers

Employers can be wary about job-hoppers because they seem riskier. A bad hire is costly, both financially and in terms of productivity.

Any job you’ve spent less than six months at should be left off of a resume, says Amanda Earle, career advising team leader at the University of Wisconsin School of Business. Any position you stay at beyond six months is an opportunity to demonstrate that you graduated and have been working, she says.

Learn how to frame job hopping as a positive to a new employer. In your next interview focus on the skills and experiences you gained from your first job, rather than highlighting entry-level boredom or a temperamental manager.