Why South Korea's Cryptocurrency Crackdown Could Pop the Bitcoin Bubble 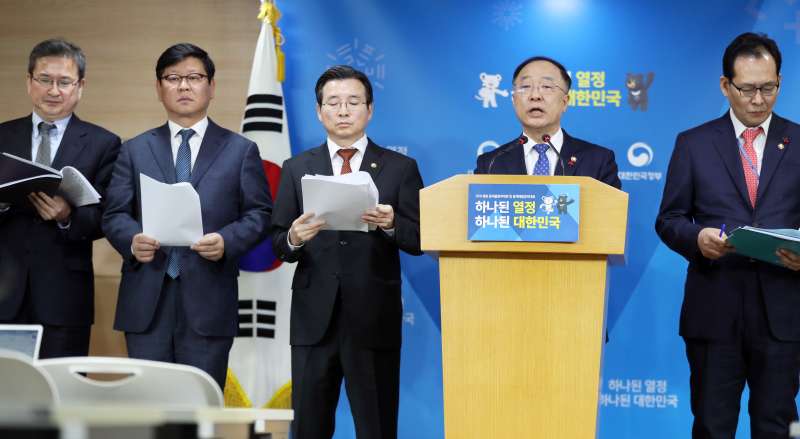 Hong Nam-ki, minister for government policy coordination, announces the introduction of a real-name transaction system for cryptocurrency trading after a meeting of related vice ministers at the government complex in Sejong, South Korea, December 28, 2017. The new policy would ban opening an anonymous cryptocurrency account. According to reports, the popular cryptocurrency Bitcoin fell by about 7.2 percent on the same day in Asian exchanges following the announcement.
YONHAP/EPA-EFE/REX—Shutterstock

On Thursday, after Justice Minister Park Sang-Ki announced that the South Korean government was considering making cryptocurrency trading illegal, the broad crypto market suffered another steep sell off. Bitcoin and Ethereum both fell by 14% on the news.

“There are great concerns regarding virtual currencies and the justice ministry is basically preparing a bill to ban cryptocurrency trading through exchanges,” said Park during a news conference on Thursday, according to Reuters.

The declaration may have been a bit premature. Officials at the Blue House — South Korea’s version of the White House — clarified later that there would be no trading ban just yet.

However, the government continues to tighten rules and oversight to quell the cryptocurrency craze.

The question is, why does the global cryptocurrency market care? With a population roughly the size of California plus Arizona, South Korea is hardly an economic giant.

But it plays an outsized role in the global cryptocurrency market.

Here’s what you need to know:

South Korea is at the epicenter of the cryptocurrency bubble.

While South Korea ranks 27th globally by population and 11th by gross domestic product, it is the world’s third largest crypto trading market in the world, behind just Japan and the U.S.

South Koreans account for 20% of bitcoin trading. Plus, it has more than a dozen exchanges in operation. A South Korean crackdown would certainly merit a pricing backlash.

Another sign of the frenzy in South Korea is the so-called kimchi premium, which refers to the fact that most of the major cryptocurrencies trade at steep premiums on Korean exchanges — often 20% to 40% higher — than on other exchanges around the world.

For instance, at midday on Friday, Bitcoin was trading at $18,200 on Bithumb in Korea, which was roughly 33% higher than the $13,700 bitcoin was going for in the U.S. at the same time, according to bitstamp.net.

This is why Coinmarketcap.com recently decideed to exclude prices on many Korean exchanges from its price calculations.

Understand which cryptos stand to lose in Korea’s crackdown.

While bitcoin gets the lion’s share of attention in the U.S., that’s not necessarily the case in South Korea.

For instance, three of the top five ethereum exchanges in the world — Bithumb, Coinone, and Korbit — are based in South Korea. And at one point last year, they accounted for more than 40% of all ethereum trading.

Meanwhile, among the major cryptos, Ripple has been trading at the highest premiums. On Friday afternoon, Ripple’s XRP token was trading for around $2.67 on Bithumb in Korea, but only $1.95 in the U.S, representing a 37% premium.

The aggressive way that South Korean investors had been trading Ripple at the end of last year is believed to have helped XRP momentarily become the world’s second largest cryptocurrency.

But after Coinmarketcap.com began to exclude the South Korean exchanges from its pricing earlier this year, Ripple’s market value plunged by several billions of dollars. And Ripple today is a distant third in overall value, well behind ethereum and bitcoin.

South Korea isn’t the first nation to go after cryptocurrency trading. The market recently went through a similar exercise in China when, in September, the government banned trading of cryptocurrencies and participation in initial coin offerings.

Bitcoin didn’t stay down long, though, as it’s now nearly $14,000 a coin. Instead, China’s decision forced domestic investors to turn to different countries to process trades, making Japan the most active country in the crypto market.

“I think this move will have less impact than what we saw in September as people are learning that someone crying wolf does not mean there really is a wolf,” says David Johnson, CEO of Latium, creator of a tasking platform that only accepts cryptocurrencies.

However, others believe that South Korea’s stiff foreign exchange laws — as well as anti-money laundering rules — will make that type of global shift a little harder here.