Why Workers Come in Sick 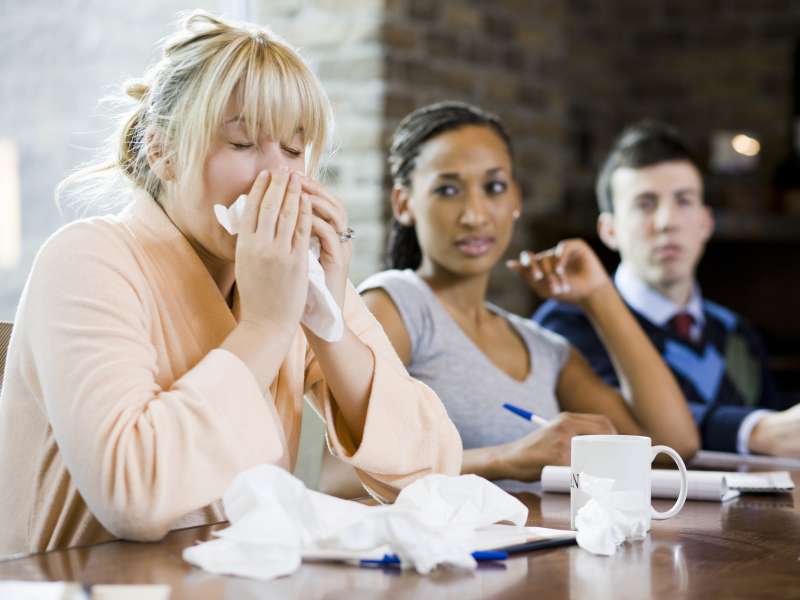 “If you’re sick, stay home.” You’ve heard that from experts ranging from the CDC, to WebMD, to your own mother. If you’re lucky, you might even hear it from your boss. Still, many come to work sick, including over half of food service workers. The phenomenon is called “presenteeism,” and researchers estimate that it costs employers $150 billion a year – more than either absenteeism or disability. So why do people go to work when they’re sick? The reason why is pretty obvious: American workers feel they can’t take time off, and a lot of the time, they’re right.

Not Everyone Has Sick Time

Some cities and states have mandated paid sick leave, but there’s no federal law requiring employers to pay workers for time off due to illness.

While federal employees and those working for companies with government contracts can earn up to seven paid sick days annually, only 61 percent of workers in the private sector have paid sick leave, according to 2015 data from the Bureau of Labor Statistics. Lower-paid workers are most likely to do without; 78 percent of workers making $9 an hour or less have no paid sick time. Workers who don’t make much money to begin with can least afford to take unpaid time off for illness.

Read More: Does Your Boss Pass the Teacher Test?

Researchers at the University of East Anglia tried to determine why employees come to work when they’re sick, by reviewing data from 61 studies involving 175,960 participants in 34 countries.

“The study found that job demands, including heavy workload, understaffing, time pressures and financial difficulties, were a significant reason people stuck it out in the office,” writes Kate Bratskeir at The Huffington Post. “On the other hand, workers will take a sick day when they have supportive colleagues and a positive relationship with managers.”

Managers and companies don’t necessarily have to say that they’d prefer workers not to take their available sick days, in order to discourage their reports from being out. Take, for instance, stories about employers who require a doctor’s note for workers who are out sick for a day or two. (Perfectly legal, by the way, although a tremendous waste of everyone’s time and resources.)

Then, there’s corporate culture. If you work at a place that lionizes workers who sleep under their desk and answer emails at 3 in the morning, you’re probably not going to feel OK about staying home with a cold.

Read More: 6 Tips for Making Your Co-Workers Like You More

The Psychological Aftermath of the Long Recession

Twenty-three percent of American workers were laid off during the Great Recession, according to according to data from the Heldrich Center for Workforce Development at Rutgers University, but 79% of workers knew someone who was laid off – a family member, friend, spouse, etc. That’s a whole lot of people who know, firsthand, that there’s no such thing as job security in the 21st century.

In an economic environment like that, it’s no wonder if workers are scared to do anything that might annoy the boss – even if the boss is likely to be more annoyed later on by the fact that the whole team is now down with the flu because no one will stay home.

Read More: The Yelp Open Letter Makes Me Glad Social Media Arrived After I No Longer Knew Everything

What Can We Do About This?

It’s easy to say, “stay home when you’re sick,” but if we don’t address the underlying issues that lead people to come to work when they’re unwell, nothing will change. To make the modern workplace safe for sick days, we need to advocate for paid sick time for all workers, and in the meantime, do what we can to facilitate change at our workplaces.

And, no matter where you stand on the corporate ladder, maybe it’s time to think about whether today’s 24/7/365 mentality leads to real productivity (it doesn’t), or just face-time from workers who’d be better at their jobs if they were allowed to take care of themselves.