Best Trail Cameras for Your Money 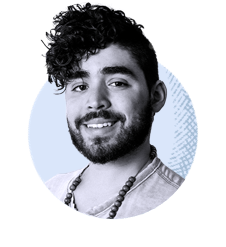 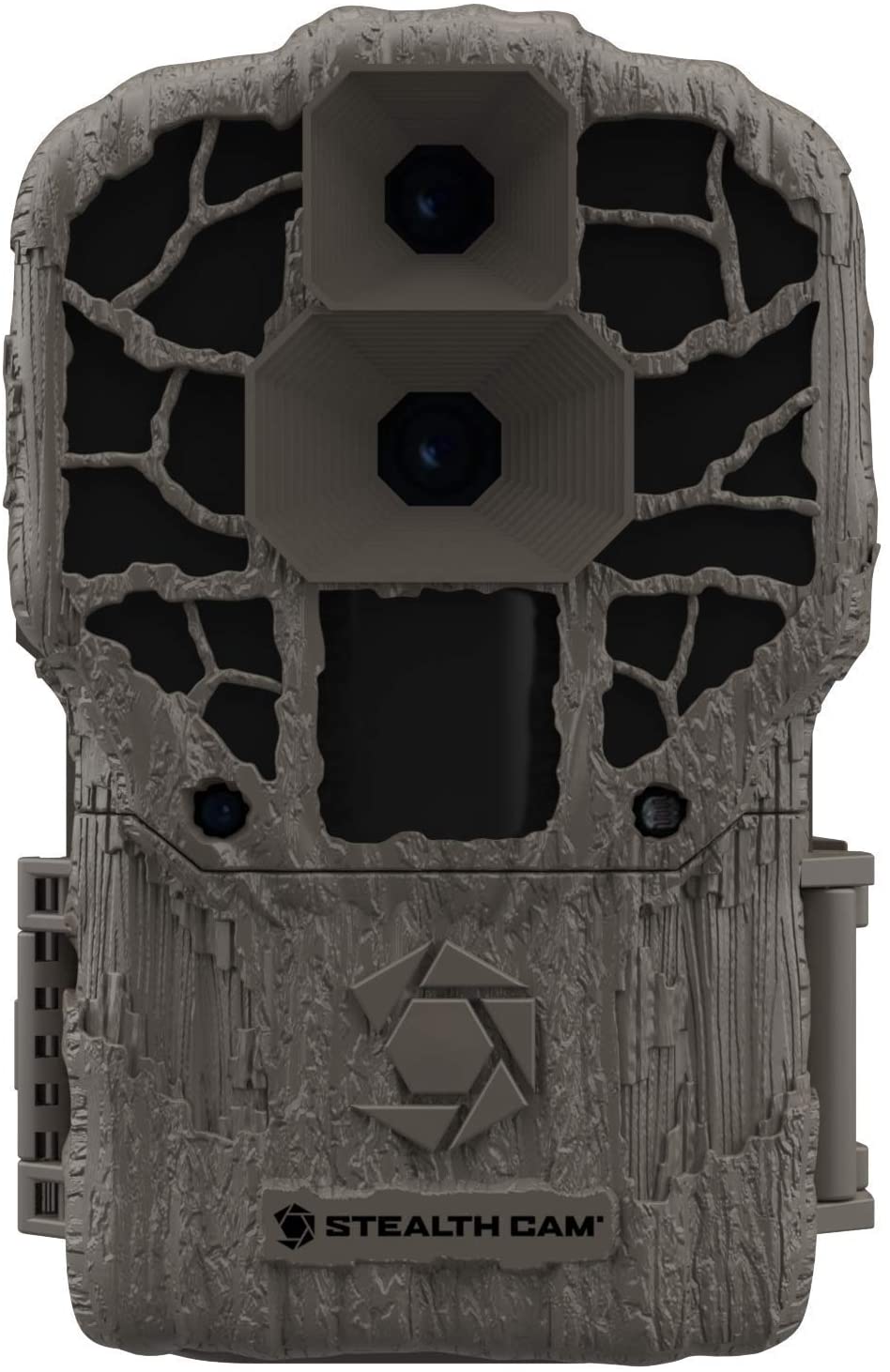 With 4K capability, the DS4KMAX is great for capturing long-length, high-definition video and still images at the same time.

Requires a lot of batteries (12 AAs) to operate. 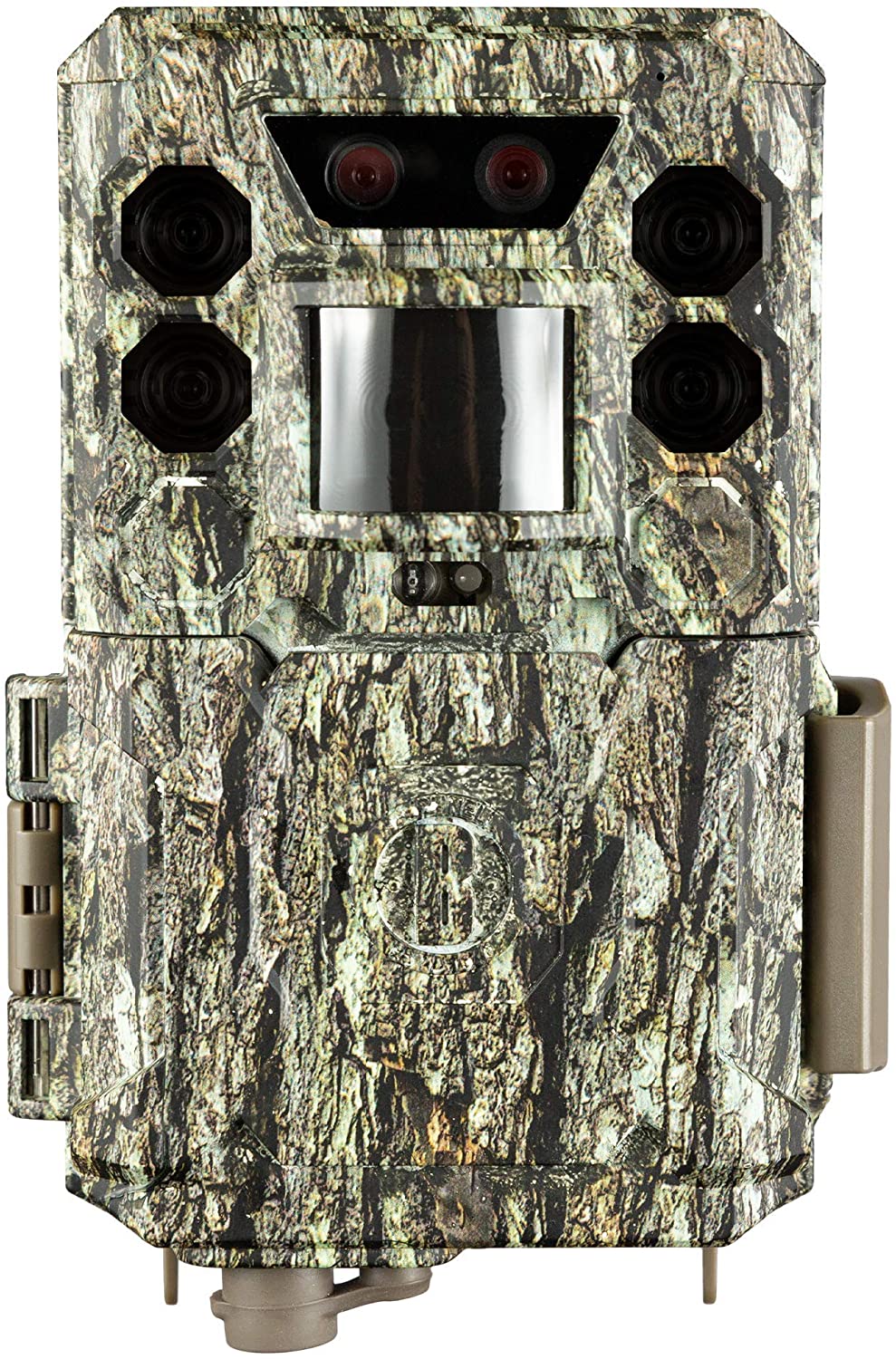 A fantastic all-around trail camera, the Bushnell CORE DS Low Glow has a night vision mode and can capture crisp images and video.

30 MP images, 1080p video, above-average specs across the board. 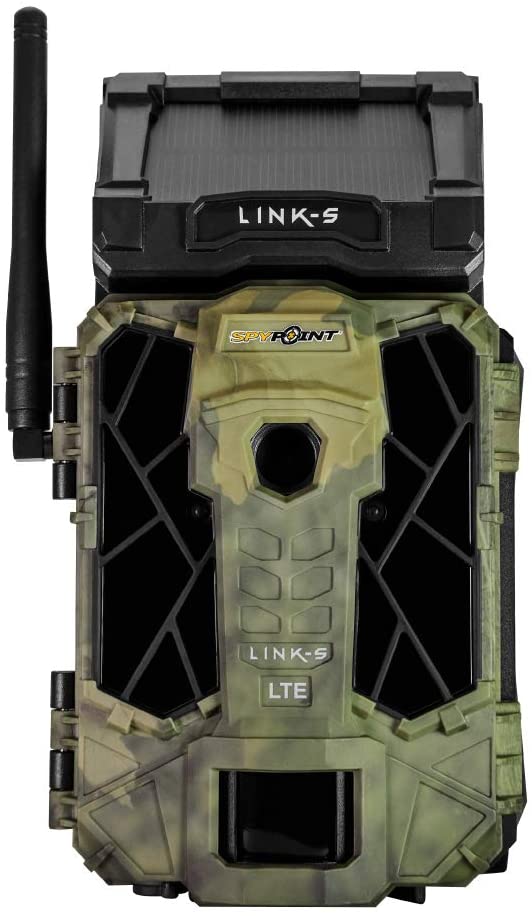 Tech-savvy hunters, photographers, and wildlife trackers will love the cellular connectivity, plus the smartphone app and its species ID feature.

One of the more expensive models in the market. 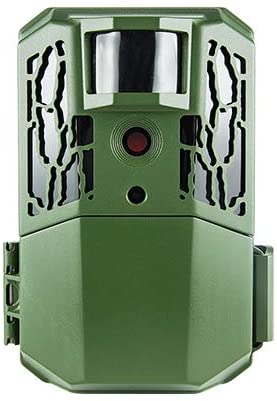 Low price and a decent list of specs and features make this model perfect for covering a wide perimeter on a budget.

Good choice if you want to set up multiple cameras.

Image quality is average at best. 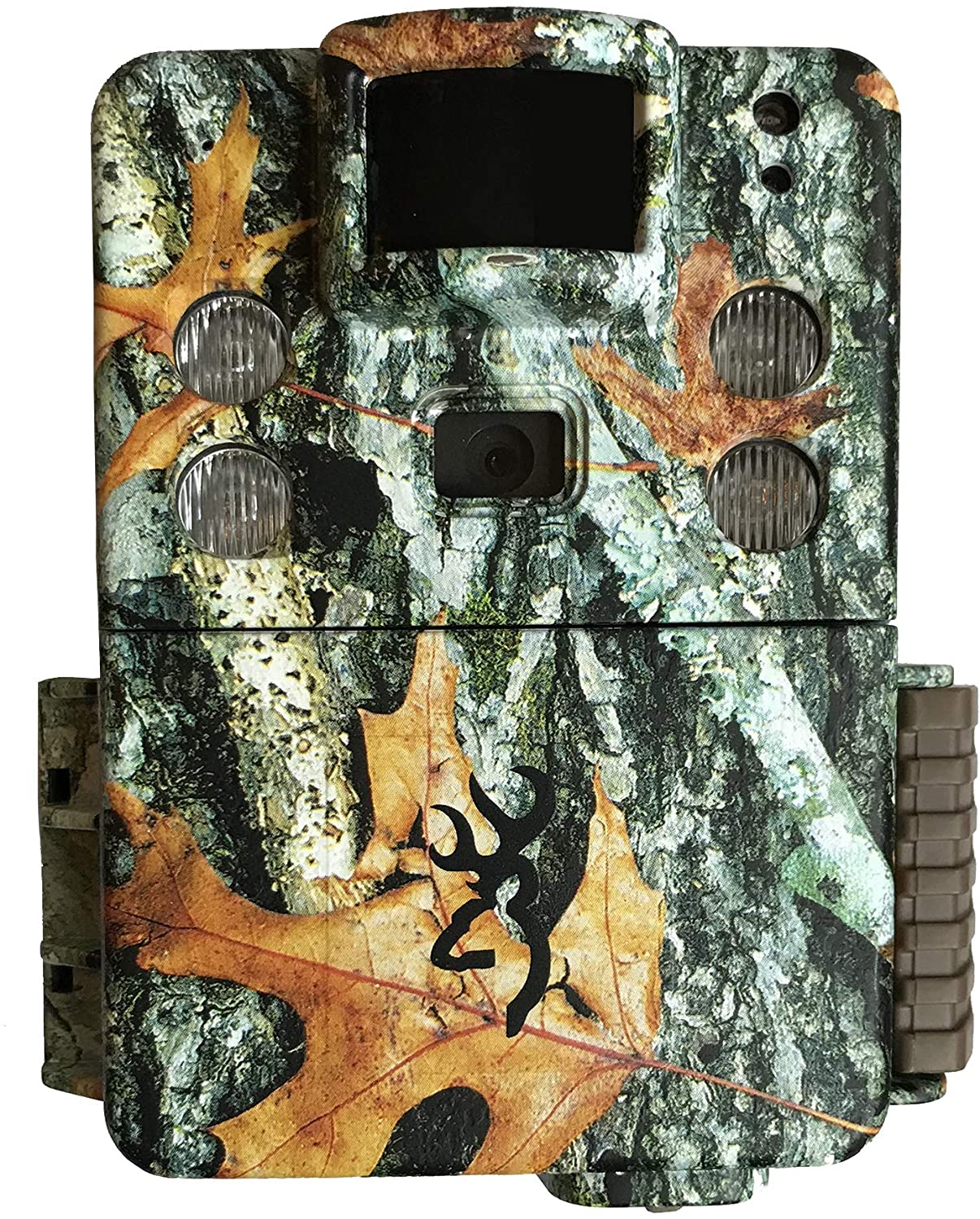 A solid choice for wildlife enthusiasts looking to capture the fastest and most wary of animals on film.

With 4K capability, the DS4KMAX is great for capturing long-length, high-definition video and still images at the same time.

A fantastic all-around trail camera, the Bushnell CORE DS Low Glow has a night vision mode and can capture crisp images and video.

Tech-savvy hunters, photographers, and wildlife trackers will love the cellular connectivity, plus the smartphone app and its species ID feature.

Low price and a decent list of specs and features make this model perfect for covering a wide perimeter on a budget.

A solid choice for wildlife enthusiasts looking to capture the fastest and most wary of animals on film.

30 MP images, 1080p video, above-average specs across the board.

Good choice if you want to set up multiple cameras.

Requires a lot of batteries (12 AAs) to operate.

One of the more expensive models in the market.

Image quality is average at best.

Wild animals tend to run at the sight of humans, and they also shy away from shiny man-made items that seem out of place in the great outdoors. That's why a trail camera, built to blend in with the natural surroundings, can be a great tool for snagging photos and video of local wildlife.

Trail cameras are generally camouflaged to fit in amid trees, rocks, or the forest ground. They're designed to be strapped to tree trunks or mounted on a base that can be propped onto branches or spiked into the dirt.

They rely on a motion sensor trigger to snap photos and video when a passing moose or fox unknowingly turns the camera on, and the devices can go long periods without any input or monitoring.

While a few trail camera models have wireless features that can send pictures to your phone or email address, most lack wireless capability. The typical trail camera simply needs to be set up in a spot where it won’t be noticed, and it'll do its job until you pick it back up to check out what it's been seeing. Most run on AA batteries (6 to 12) or solar powered rechargeables that can last months. They also have room for external storage, usually in the form of an SD card (up to 32 GB).

As you might imagine, hunters are the main audience for these devices, followed by wildlife photographers, birdwatchers, and other nature enthusiasts. Others use trail cameras as stealthy parts of their home security systems in rural and wooded areas. However, while a dedicated security camera system lets you view a live video feed, most trail cameras generally provide photos and video clips only after they've been recorded.

Where are you allowed to set up trail cameras? The rules vary. Permits may be required if you want to place a trail camera on state or federal land, and, in some cases, the use of trail cameras may be forbidden or very restricted. In addition to finding out about proper permission from the authorities, it's important to realize the risk of setting up a camera on land you don't own — because there's always a chance it might get stolen.

Depending on the features and capability, a trail camera can cost anywhere from $60 to upwards of $450. There are a great variety of models, with different strengths and weaknesses, so keep the following features in mind when shopping around:

• Megapixels. Still-image image resolution is measured in Megapixels (MP). On average, most cameras have about 20 MP resolution, though high-end cameras go as high as 30. A higher pixel count naturally results in clearer images, which is useful for photography and home security purposes.

• Lens. Lens quality will greatly influence image quality. No matter how many megapixels your camera is, the quality of the picture will suffer without a good lens. Most trail cameras come with a fixed lens, while others come with a wide-angle or optical zoom lens. A wide-angle lens will capture broader images while the optical zoom allows for more detailed images.

• Video length. Although a short video clip length might not be a dealbreaker for most people, the fact is that many animals can take a while to do anything interesting on film. Average clip length is 30 seconds, with a few high-end models going up to 60 seconds. A small handful of cameras have even shorter clip lengths, but they often make up for it by having a shorter recovery time between clips.

• Shutter speed. Shutter speed is how fast the camera can snap a picture after it has been triggered. The standard for most trail cameras is 0.5 seconds, but that might not be enough for faster animals, and can result in blurry images. If catching clear photos of nimble critters is the goal, a shutter speed of 0.2 seconds or less is ideal.

• Detection range. Trail cameras can operate on a regular schedule, or when triggered by movement. The detection range determines how far away an animal or person can be from the camera before it activates. Although 80 feet is the average distance for most cameras, and higher-end models feature ranges of up to 100 feet.

• Night vision. Many models include a night vision mode to help track more reclusive nocturnal animals like owls and badgers. The night vision mode uses an infrared flash that won’t alert most woodland critters so you are able to capture footage of their nighttime habits. Keep in mind that the effective range for night vision pictures and video is usually about 10 feet shorter than the advertised detection range.

• Wireless features. Most trail cameras are “set it and forget” devices, requiring you to pick them up after some time to retrieve their pictures and videos. Some models have Wi-Fi connectivity for you to set them up near your home, while others use cell phone networks and let you receive pictures and video directly to your phone or email address.

Different trail cameras have their strengths and weaknesses. But what if you want a solid general-purpose device that does many things reasonably well? Bushnell’s Core DS Low Glow is the jack-of-all-trades of trail cameras.

Its 30MP camera lets it take photos on par with higher-end models, while the video resolution sits at 1080p up to 60 frames per second — the highest resolution available under 4K. The shutter speed is fairly quick at 0.2 seconds, and it has a detection range of up to 100 feet.

The aptly-named DS Low Glow includes a night vision mode, with which it uses a “low glow” infrared flash to take pictures of nocturnal animals. It requires only 6 AA batteries to operate — fewer than others in its price range — reducing your operating costs a little. For even strong night vision capability, a “no glow” model is available, although it has a shorter range of 80 feet.

Most trail cameras lack wireless features, so it's best to use them in local areas where it's easy for you to retrieve them. A few models can connect to Wi-Fi networks, but that limits them to areas where your signal can reach them. Still other trail cameras, like the Skypoint Link-S-V, can connect directly to a cellular network such as AT&T or Verizon, making it especially easy to keep tabs on the images and videos captured.

Hunters will find this model especially helpful, since the smartphone app includes a feature that can identify different animal species and even score bucks using an evolving AI algorithm.

Performance-wise, the Link-S-V provides an admirable 12 MP resolution, a lightning-fast 0.02 second shutter speed and 100 feet of flash and detection range. It comes with a solar-powered battery, which helps keep the camera operational for days without input, although AA batteries can be used as a backup. Because of all of these features, it is fairly expensive, going for approximately $500 for the full-featured model.

Trail cameras are most commonly used for keeping track of wildlife and monitoring hunting areas. They don’t necessarily need to take the sharpest pictures to do the job. And if the goal is to monitor animal movement in a large area regardless of image quality, the Primos Autopilot is a very affordable and consistent performer.

Specs of 16 MP and 1080p video might not be the highest out there, but they’re more than enough for general use or as an introduction to trail cameras in general. You can usually buy a Primos Autopilot for less than $70, and bundles that include a 32GB SD card can be found for just over $100.

This model's low cost and reliable performance mean that it might also work as a form of home security in rural areas. Just set up a handful of cameras around your home to keep track of visitors, both animal and human.

Camera shutter speed is important when trying to capture images of wild animals. While many trail cameras feature shutter speeds of half a second, that sometimes isn't fast enough for agile creatures such as foxes or low flying birds. The Strike Force HD Pro’s 0.22-second shutter speed solves that problem.

Not only is it fast, but it can capture images at 20 MP and 1080p video at 30 frames per second. This means image quality will be consistently good (as long as the weather conditions are right). A 32GB SD card slot means that it’ll be able to store a large amount of pictures in between stakeouts.

For fans of night photography, this model's no-glow flash can illuminate up to 120 feet. Just bear in mind the camera will only be triggered by movement within 80 feet of its position. That's a little on the low side, and can mean you'd miss something due to blind spots; as a solution, some users recommend setting up an extra camera or two in the vicinity.

The Best Home Security Cameras and Surveillance Systems, According to Safety Experts