Where Home Prices Are Heading in the Age of Coronavirus 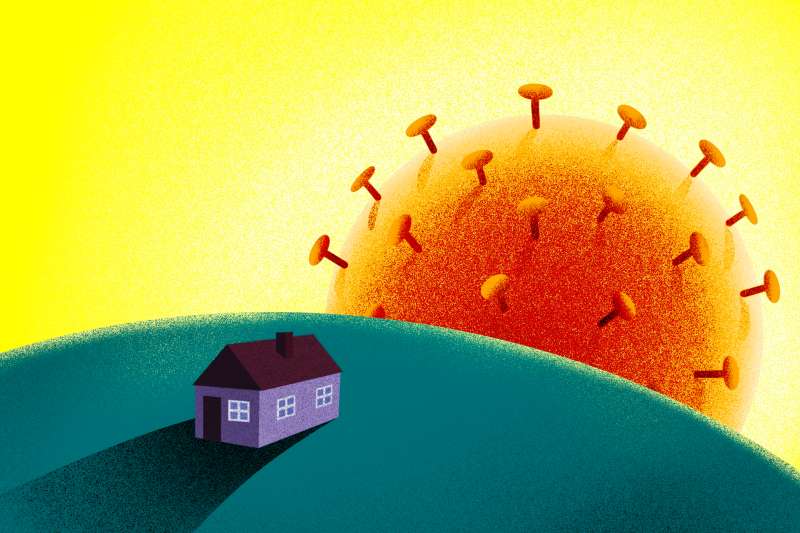 Baltimore realtor Nicole Callender had five homes scheduled to hit the market April 1. Then the coronavirus struck and all of her clients decided to postpone. Now with home sales picking back up in the last two weeks, Callender is urging sellers to move forward, betting that life — and her city’s real estate market — will soon be back to normal.

“I have a listing coming up in Locust Point, which is a very desirable location,” says Callender, who hopes the house will soon fetch the $485,000 asking price. “The seller was on the fence…but when I sat down with them and showed them how quickly homes are selling in the city, they decided they want to list their home now to avoid missing out on a hot market.”

The coronavirus pandemic has shuttered large swaths of the U.S. economy. The real estate market — where just weeks ago sellers and agents had been counting on a brisk spring selling season — is no exception. Four out of five agents surveyed in early April by the National Association of Realtors said they saw fewer houses on the market. Only half of Americans said they think that now is a good time to buy a home, according to a recent Gallup survey — the lowest share since Gallup began tracking people’s sentiments on real estate in 1978.

But despite these worries, many real estate agents, including Callendar, are optimistic that the market will soon snap back. Pending home sales went up 6.2% in the week ending April 19, Zillow reports. And, after falling for five weeks, mortgage applications rose 12% for the week ending April 24, compared with the previous week, according to the Mortgage Bankers Association.

With the proper help, you can buy a new home.
A mortgage expert will work with you to organize your budget, so you'll be on your way to a new home. Click on your state and let's get started.
GET STARTED

What’s more, unlike the stock market, home prices never plunged in response to the pandemic. Price growth merely slowed as buyers pulled listings. In the first two weeks of March—before the U.S. economy really took a hit from COVID-19—median listing prices had increased 4.4% year-over-year on average, Realtor.com data shows. In the three weeks ending April 4, April 11, and April 18 the median U.S. listing price posted an increase of 1.6%, 0.8%, and 0.3% year-over-year.

“We’re in a holding pattern on pricing on a national level,” says Jeffrey Detwiler, president and CEO at Long & Foster Companies. “We haven’t seen the ongoing appreciation that we were seeing before the pandemic, but we haven’t seen any real declines in home prices either.”

Despite the difficulty of listing and closing house sales, many real estate market fundamentals are strong, real estate experts say. With mortgage rates hovering at record lows—the average for a 30-year fixed-rate mortgage was 3.33% the week ending April 23, Freddie Mac reported—“now is a prime opportunity to lock in a cheap mortgage rate and buy a home,” says Frank Nothaft, chief economist at CoreLogic.

Furthermore, “Unlike during the housing crisis in 2008, when so many people were locked out of getting mortgages, there’s not a mortgage crisis right now,” says Brendon DeSimone, a Westchester, NY-based real estate broker. “People are still getting approved for mortgages and buying homes.”

Your new home is just around the corner.
Looking to become a homeowner? Quicken Loans can help. Click below and explore your options today.
GET STARTED

Another reason many economists say the U.S. isn’t hurtling toward another housing crash: “People have a lot more equity in their homes than they did during the last recession, and most of today’s mortgages have passed strict underwriting standards, which wasn’t the case back in 2008,” Detwiler says.

Also, the Coronavirus Aid, Relief, and Economic Security (CARES) Act allows homeowners with government-backed mortgages—which makes up roughly three in four mortgage holders—to get mortgage forbearance for up to a year if they’ve experienced financial hardship due to the coronavirus pandemic. That should help prevent a repeat of the foreclosure crisis and keep home prices relatively stable, Detwiler says.

The upshot is, many market watchers are expecting only a mild effect on prices. “I think we’ll see home prices stay flat or grow but they’ll grow much more slowly this year than they have in previous years,” according to Danielle Hale, chief economist at Realtor.com.

CoreLogic’s Nothaft says home price changes may differ between low-end and high-end homes. “For higher-priced homes, I wouldn’t be surprised if we saw prices decline slightly over the next six to 12 months,” he says. “Trade-up buyers tend to be older Americans, and older adults are at greater risk of getting sick from COVID-19, so I don’t think those buyers are going to be as active in the housing market.”

What could still go wrong

All this doesn’t mean the real estate market won’t have some economic scars.

Housing starts—i.e., how many new residential homes began construction—declined 22% in March, the largest one-month decline since the mid-1980s. Lawrence Yun, NAR’s chief economist, expects construction of new homes will pick back up as states begin loosening their shelter-in-place orders, but if businesses shut down again homebuilders may scale back on new construction, which could hurt home prices.

Moreover, markets where home affordability was already an issue, such as San Francisco, Los Angeles, and Seattle, could experience price declines if the economy sputters over the next six months. Nothaft is especially concerned about New York City home prices. “That’s where the greatest number of COVID-19 cases are, and I think a lot of people may reconsider whether they want to buy a home in the city or buy a home in the suburbs,” he says.

How the housing market has performed in past recessions also suggests homeowners could be in store for pain. New home sales declined 15%, on average, during the seven recessions since 1970, according to a study by the Harvard Joint Center for Housing Studies. And, in recessions since 1980, real home prices decreased 5% year-over-year.

What to do if you’re buying or selling a home

Yun says buyers shouldn’t expect any big discounts in the coming months. “Just because there’s a huge number of people filing for unemployment doesn’t mean we’re going to have the same foreclosure crisis that we saw in 2008 and 2009,” he explains. Indeed, a recent NAR survey found that 74% of real estate agents currently working with sellers reported that clients have not reduced listing prices to attract buyers.

Meanwhile, sellers must price their homes at market value, says Matt Dolan, a real estate broker at Sotheby’s International Realty in Marblehead, Mass. “I’m not a COVID expert, but what I do know is that homes are still selling and they’re selling for full list price when a house is priced fairly, so I’m encouraging many sellers to put their house on the market now rather than waiting until the dust settles,” he says.

Sellers will need to be patient, though, especially those who live in cities that have been hit hard by coronavirus infections. In the top 10 metros with the highest COVID-19 cases per capita, homes are spending more days on the market than in the 10 metros with the lowest COVID cases, a recent Realtor.com analysis found.

Worried About Your Credit Score? Here’s How to Get the Best Rate on Your Mortgage