How Veterans Can Take Advantage of the Low Mortgage Rate Environment 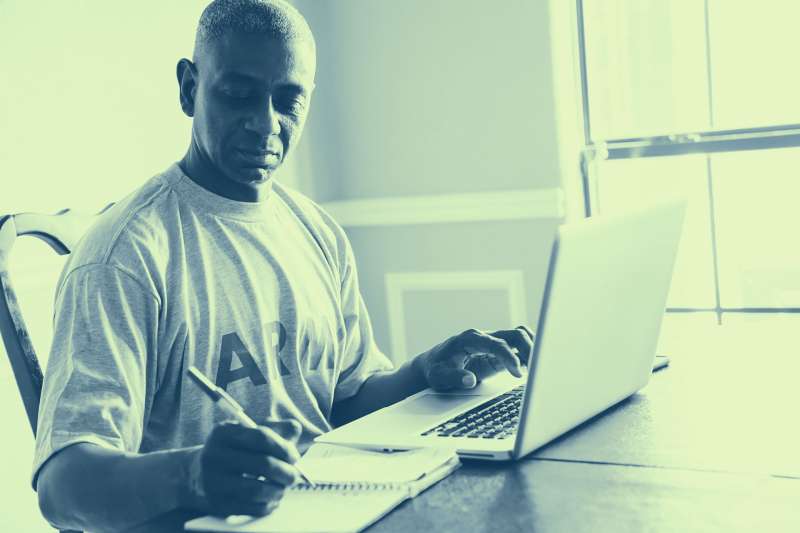 A decades-old benefit to help soldiers returning from World War II — the VA loan program — is more popular than ever. The program allows veterans to buy homes with zero-money down, but service members still need to shop to get the best deal.

During the year ending September 30, the U.S. Department of Veterans Affairs guaranteed a record 1.2 million home loans worth a total of $363 billion — more loans than it backed in the previous two years combined.

Established in 1944 as part of the G.I. Bill, the VA’s home loan program has helped veterans access and retain homeownership by insuring more than 25 million purchase and refinance loans. The idea behind the program is to reward members of the military for their sacrifice by making it as easy as possible to become homeowners.

VA loans make buying or refinancing a home more affordable for qualified veterans, service members and spouses.
Service to our country comes with benefits. Click on your state to get a free quote!
Get a Free Quote

The program has surged in popularity in the years since the Great Recession, as tightening lending standards have made it harder for veterans to qualify for conventional mortgages. VA loans now account for about 10% of new loans and a whopping 80% of veterans are homeowners compared to just 64% of the broader population.

VA-guaranteed loans are made by private lenders, but the VA promises to repay the lender if a loan goes bad, lowering the lender risk. As a result, requirements to qualify for VA loans can be far less stringent than for conventional loans and eight in 10 VA borrowers don’t put any money down.

Interest rates charged on VA loans are also often lower than on conventional loans. Currently several lenders are advertising rates as low as 2.25% for a 30-year fixed rate loan, while the average conventional rates is 2.78%. A streamlined process also makes it easier to refinance a VA loan than a conventional mortgage.

It’s a great deal if you can get it. However, a new analysis by online mortgage brokerage Own Up shows that the difference in the best and worst rate different lenders would offer to the same VA borrower is 1.25 percentage points. The spread is closer to 0.5 percentage points for conventional loans, underscoring the need for veterans to shop around to compare rates and fees. About 1,500 lenders make at least one VA loan a year, but 40% come from about ten companies.

“The VA loan product is one of the best financial loan products that exists in the U.S. It was developed to give certain benefits to military personnel, and rightly so,” says Patrick Boyaggi, CEO of OwnUp, reiterating that though the government insures VA loans, they are not government issued and the VA does not have a set interest rate. “People believe this product is their only option and that they are going to be treated the same across all lenders. That gives lenders the opportunity to take advantage.”

How to qualify for a VA loan

VA loans are essentially an employer benefit for members of the military. Most service members become eligible after 24 months of service, or less if they served in active duty or were injured. (Some surviving military spouses qualify as well.) Veterans can take advantage of the benefit at any age and use it multiple times. To close, you’ll need a VA issued form called a Certificate of Eligibility.

You don’t need sterling credit to qualify for a VA loan and lenders may be more flexible than with other loan types.

The VA does not set a minimum credit score for VA loans. The private lenders who originate the loans each set their own requirements, but it’s possible to get a VA loan with a credit score as low as 620. That said, VA borrowers with higher credit scores do receive better rates, so if you have the time it makes sense to try improving a low credit score by paying off debts and correcting any errors on your credit report.

VA lenders also consider something called residual income. This is the amount of cash a borrower would have left over each month after paying major monthly expenses, including their new mortgage, existing debts, taxes, child support and utility payments.

Keep an eye on your Credit Reports and Score.
When suspicious charges show up on your statement, they may be a sign of fraud. To stay on top of your credit, click below and get the help you need now.
Get Started

If a veteran will not have enough money left in their budget to cover basics like food and gas, the VA doesn’t want them to take out that loan. Residual income requirements set by the VA vary by state and family size. They reach as high as $1,158 per month for a family of five living on the West Coast. Lenders estimate your residual income by looking at your credit report and sometimes asking follow up questions.

According to Chris Birk, a spokesperson for lender Veterans United, the residual income guideline is a key reason why VA loans have a low foreclosure rate despite the fact that most borrowers don’t put any money down. Like for other mortgages, lenders will also look at a veteran’s debt-to-income ratio — how much of your monthly income goes toward paying down debt — but residual income is generally weighed more heavily and the VA does not have a DTI requirement. At Veterans United for example, borrowers with a DTI above 41% need to exceed their local residual income guidelines by 20%. Some lenders will allow a debt to income ratios as high as 60%.

In addition to more lenient qualification standards, a key difference between a VA home loan and other mortgages is that no down payment is required. According to mortgage tech company Ellie Mae, the average loan-to-value ratio for VA purchase loans is 98%. Earlier this year, a rule change made it possible to get a zero down payment VA loan regardless of loan size. Previously VA loans were capped at the Federal Housing Finance Agency’s conforming loan limit, which is currently $510,400 across most of the country.

Many first-time or would be homebuyers say saving for a down payment is the biggest hurdle, so not having to put any money down is a huge perk. That said, as with any loan, putting money down will lower your monthly payment and reduce the amount you pay in interest over time.

Lenders also cannot charge VA borrowers for private mortgage insurance. PMI, which protects the lender, is generally required on a conventional loan if a borrower puts down less than 20% and tends to cost between $30 and $70 per month for every $100,000 borrowed.

Ready to take the next step and buy your new home?
For veterans, active-duty service members and surviving spouses, VA Home Loans can help make buying a home more affordable.
Get Started

While VA borrowers don’t pay mortgage insurance, they are required to pay a one-time VA funding fee. First-time home buyers pay 2.3% of the total loan amount, borrowers who have taken out a VA loan before pay 3.6%. The fee is lowered if borrowers make a down payment. Many VA lenders also charge a 1% loan origination fee. The VA prevents lenders from charging certain other closing costs. The rules are also relatively lenient on what costs a seller are allowed cover on the buyers behalf.

Additionally, the VA sets minimum property requirements, meant to ensure the home is safe. They look for things like peeling paint, holes in the wall and exposed electrical outlets. This means you are required to get an appraisal when applying for a VA loan. A VA appraisal for a single-family home costs between $500 and $700 depending on where you live.

How to refinance a VA loan

With mortgage rates near record lows for all loan types, there has been a refinance boom across the mortgage industry. The trend is even more pronounced in the VA loan sector, with the number of VA refinance loans up 241% for the year ending September 30.

Among the reasons is that the VA loan program includes an option called an Interest Rate Reduction Refinance Loan, sometimes called a VA streamline refinance. WIth this loan, existing VA borrowers can take advantage of a lower interest rate or convert an adjustable rate mortgage to a fixed one, without an appraisal and with far less paperwork than a typical refi. The IRRRL funding fee is 0.5%.

Don’t Have 20% for a Down Payment? Here’s How to Buy a Home With Less

Lockdown Converted Many Americans Into Serious Savers. Now They Have Houses to Show for It