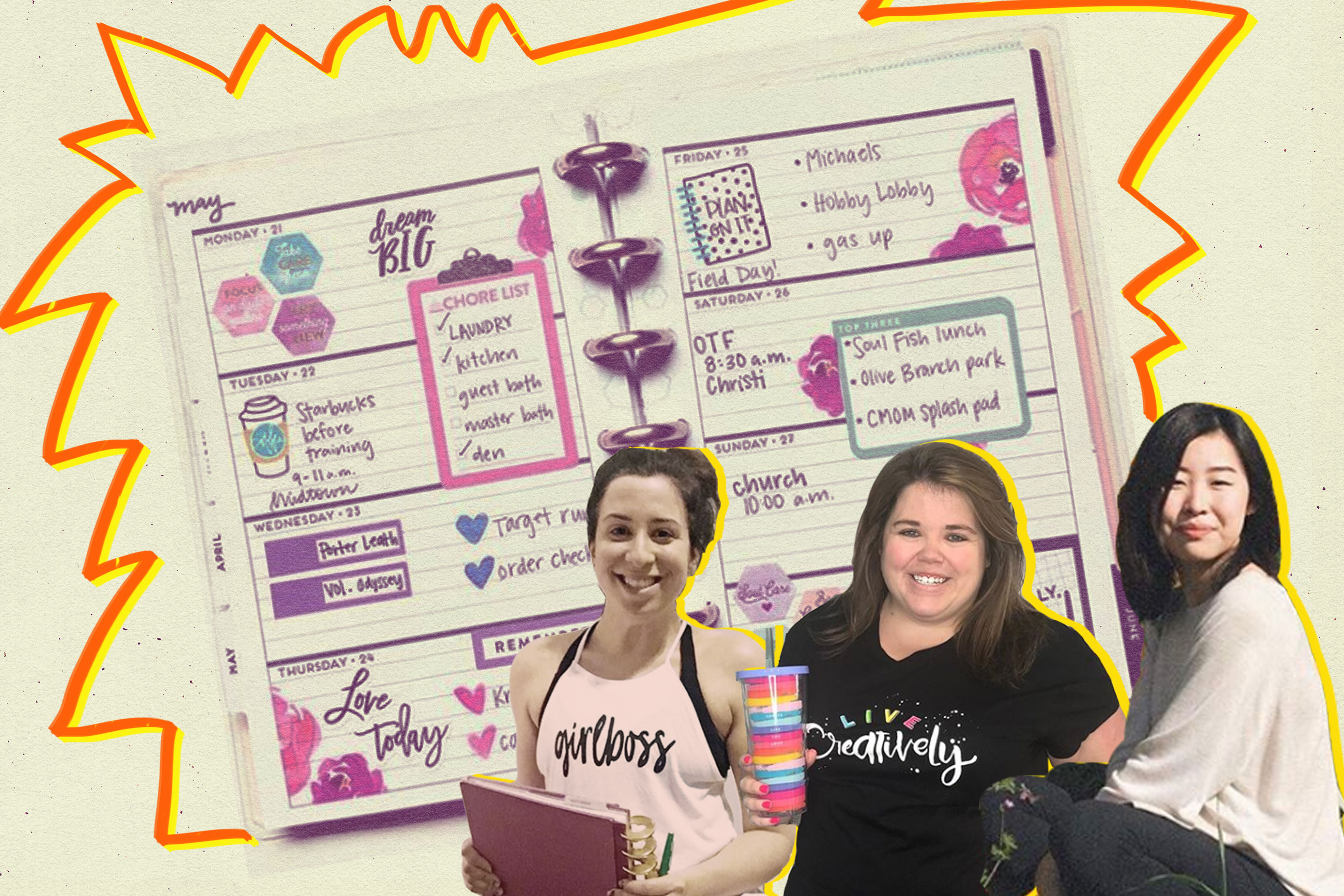 Inside the Highly Organized Lives of ‘Planner Addicts,’ a Massive Instagram Community of Women Who Make Beautiful To-Do Lists

Emma Lee is the kind of student your parents always wanted you to be.

She carries a hand-bound notebook wherever she goes, pulling it out of her Fjallraven backpack to update her class, chore, and plant-watering schedules.

On another page, the 17-year-old tracks every dollar she spends; every $100 Urban Outfitters haul, every $2 Starbucks run. She totes around a list of New Year's resolutions, too. And another for self-care tips. Last year, when Lee was applying to colleges, she kept a master spread of every deadline, essay, and application requirement she wanted to keep on her radar.

Lee’s “planner” is a fine-tuned weapon of productivity. The key, she wagers, to squeezing as much as she can out of each and every day. In social media lingo, that makes her a “Planner Addict” — an ambitious go-getter who credits the thing she keeps in her backpack for making her that way.

“Planning has changed my life for the better,” she says. “I write a lot more, I think more clearly, I’m more emotionally stable. It’s made a huge impact on everything.”

Popular planners range from $2 Muji journals to the $60 Day Designer. Lee’s planner, pictured above, is a $30 notebook from Archer & Olive. Photo courtesy of Emma Lee

There’s been a lot of talk about “grind culture” lately, and how the technology that helps us do our jobs in 2019—the iCalendars, the browser extensions, the productivity apps like Evernote and OmniFocus—shapes our relationship to work. Are we getting more done, the thought experiment goes, or are we just burning out faster?

Some are in school, like Lee, but others work full time jobs or are stay-at-home moms. They have different tools of the trade, too. Lee uses a “bullet journal,” a customizable organizational system that can work with any blank notebook. Other "Addicts" buy pre-made planners like the “Day Designer,” or the “Happy Planner.”

It’s all very retro — and very, very pretty. But is it a life hack worth basing your identity on? A meditation on our fading attachment to pen and paper? Or a trendy little time suck?

Like every niche group of impassioned fans, the Planner community is Extremely Online.

The perfect calligraphy and immaculate spreads of top #PlannerGirls frequently make it to “StudyBlr” blogs, a slice of the internet devoted to the aesthetics of note taking. On Instagram, the bullet journal’s top two hashtags, #BulletJournal and #BuJo, have been used nearly 7 million times alone.

“People come to [planning] for a variety of reasons,” says Gretchen Klobucar, a 32 year-old education fundraiser. “In most cases, they’re seeking to manage a role or expectation they’re anxious about. They want to be able to plan so they can live the life they envision.”

Klobucar is a mom to two young kids, and says she uses the Happy Planner to organize all the things that used to swim frantically in and out of her thoughts — upcoming work assignments, fitness goals, her baby’s eating habits.

She started in 2015, shortly before her family moved from a small town in Louisiana to Memphis, Tenn. As Klobucar adjusted to life in a new city, her Happy Planner, and the online community of women who swear by it, helped her get her bearings.

“I was kind of losing myself,” she says. “I was feeling incredibly disconnected with my friend base, feeling the pressure of needing to find a new job, and losing my identity as a career woman. I turned to the planner community to fill a lot of those gaps in my personal life.”

To Klobucar, planning is a creative, communal activity that adds structure to the areas of life that need it.

To others, it’s … something else. Thumb through hashtags like #PlannerJunkie and #PlannerLove, and you’ll find that, for every Gretchen Klobucar, there’s at least a half dozen Planners who are more concerned with making intricate to-do lists with $100 marker sets and $40 sticker packs (and documenting it all with a $500 camera) than crossing anything off of them. It’s a competition for who can bring more “horse girl" energy to the world of agenda planning, where the most dedicated spend hours a week, or even hours a day, making their pages Instagrammable.

At the other end of the spectrum is an even stranger compulsion: People who take their to-do lists too seriously.

Suvrat Bhagave, a family psychiatrist and author of A Moment of Insight, says he’s treated patients whose stress levels actually rocket when they use a planner— some even lose sleep over it.

“Planners are wonderful symbols of rational thought,” he says. “But when your need to stick with the plan is getting in the way of other things you should be doing to take care of yourself, that’s a red flag.”

It’s hard to imagine this fixation existing outside our current cultural moment — where the “always be grinding” mentality of the startup world has fueled social media’s demand to look 100% fulfilled 100% of the time. New York Times writer Erin Griffith dubbed this “toil glamour” recently, and noted how modern “hymns to the virtues of relentless work” sound an awful lot like communist propaganda.

We’re overburdened, and the consequences are alarming. A 2018 Gallup study found that two-thirds of employees experience burnout on the job, and nearly a quarter feel that way “very often or always.” Experts say this can manifest in lackluster performance, psychological duress, or a myriad of compulsive habits. Like obsessively over-exercising. Or using a daily planner to chart out your every minute.

“We’re constantly being barraged with things we should and shouldn’t be doing,” says Dr. Nisha Jackson, author of Brilliant Burnout. “When you start feeling that way, you start habituating on things that give you some sense of control. That can be sugar, chocolate, workaholism, plannerhalism. Whatever.”

Planner Addicts, for their part, tend to be pretty open about the fact that some people in their community need to close their planners and take a spa day. But all the women I spoke to believe that, for them personally, this is an activity that combats the stressors of the daily grind. It doesn’t add to them.

It’s also a support system — a way to connect to women with similar responsibilities and ambitions. And with the help of social media, it’s become a national charge.

“It feels unlike anything I’ve ever been apart of,” says Heather Kell, a Texas-based planner and YouTuber.

Kell, whose top videos, like “How to Decorate Your Very First Planner Spread,” and “Planner Newbie Advice,” get hundreds of thousands of views, spoke to me over the phone from her home outside Dallas. On her planner, she scheduled me in for the late afternoon, right before the daily walk she takes with her husband and their two dogs.

Her to-do lists aren’t requirements she feels beholden to. “It’s more about organizing your life so that you have time to relax and NOT be busy all the time,” she says.

That’s not to say she doesn’t take it seriously. Like all Planner Addicts, she definitely, definitely does.

At one point, the organizers showed a video compilation of Planner Addict success stories. There were some incredible anecdotes: One woman paid off $25,000 in debt with her planner, another tracked her fertility treatments, and successfully became a first-time mom as a result. By the end of the presentation, she says, everyone was crying.