Here's How Much It Costs to Be an Apple Early Adopter

Our long, smartwatch-less, national nightmare is finally over.

The Apple Watch was officially released today. That doesn’t mean you can walk up to the counter and buy one yet—watches may not be coming to retail outlets until May—but now is as good a time as any to ask the all-important question: Should you, gentle reader, become an Apple Watch early adopter?

The answer may simply come down to your feelings about the product, which the reviewers tell us is a cool, somewhat flawed, but legitimately mainstream first foray into wearable technology. If the idea of literally strapping an Apple mobile device to your body doesn’t sound very appealing, then the decision isn’t complicated: Skip it for now. At the other end of the spectrum are tech junkies like me for whom a first-generation Apple Watch isn’t a question at all, but an inevitability.

But for many normal people who make rational purchasing decisions based on costs and benefits—let me know what that’s like sometime!—the Apple Watch presents a real dilemma: Do you take the plunge and get in early on the smartwatch trend, or do you wait until the kinks have been worked out?

Your decision should largely depend on two variables: How much cheaper and better will the Apple Watch be in the future, and how long will one have to wait until that future arrives?

A look at Apple’s major new product categories going back to the beginning of the millennium gives us some insight into both of these unknowns.

The original iPod. Released in October of 2001, it cost $399 and shipped with five gigabytes of storage. A year and a half later, the first major hardware revision—which introduced the dock connector and a greatly improved and less break-prone interface—doubled the base model’s storage and dropped the price down to $299.

The iPhone. A cautionary tale for early adopters if there ever was one. Launched in late June 2007 with the 8 gigabyte model retailing for $599, the iPhone’s price was cut to $399 less than three months later. And just over a year after the original release, Apple shipped the iPhone 3G at $199, a 66% price reduction.

Apple TV. Not all of Apple’s new product categories have seen their price fall quite so fast. The Apple TV didn’t get cheaper for three and a half years; but between March 2007 and September 2010 it went from basically a $299 media center PC to a $99 streaming box.

The iPad. Some might argue that the price of the iPad hasn’t changed much at all. More than four years after its release, the base model still sells for the original sticker price of $499. That said, the many consumers who waited two and a half years for the $329 iPad Mini feel they made a very wise decision—and it’s hard to argue considering that sales estimates suggests it’s the iPad most people actually wanted.

So what’s the bottom line? Well, I crunched the numbers together (you can see my admittedly unscientific methodology in the footnote below) and found that since 2000, the average major new consumer-product category from Apple fell 48% in price between the original launch and the first major price cut, which on average took 2 years and 3 months.

Here’s two graphics I put together with the data:

One might look at the graphic and argue that the average obscures two dramatically different stories: The iPhone and Apple TV experienced very large price cuts, while the iPad and iPod saw more modest reductions. But even the smallest price drop, the iPod’s, was 25% in less than 18 months.

So there’s a clear lesson in the big picture: Early adopters have paid a significant premium to be among the first to own a new line of Apple devices.

Then there’s another big cost to early adopters: purchasing something that’s about to get a lot better very soon.

To a certain extent, this phenomenon is built into every electronics purchase. The computer you buy today won’t be quite as good as the computer you could buy a few months, let alone years, from now.

But it’s especially true when it comes to brand new product categories. It isn’t just that the price of Apple’s post-2000 innovations fell when the first serious revisions hit the market. It’s that the new and less expensive versions were much better than the originals.

It’s hard to believe now, but the original iPhone didn’t ship with an app store, group messaging, high-speed internet, or even the ability to copy and paste text. It was also exclusive to one carrier, AT&T, which at the time was notorious for spotty service. “The iPhone was crippled when it first came out,” recalls Jean-Louis Gassée, a former Apple executive interviewed in the recently released biography, Becoming Steve Jobs. It was only a year later, when the iPhone 3G was released, “that the iPhone was truly finished.”

One could argue the Apple Watch is similarly crippled. Cupertino’s latest widget completely depends on the iPhone for a GPS and data connection, turning the watch into a slightly souped-up timepiece when worn on its own. It’s not hard to imagine that a future Apple Watch model that could exist indepently, making it a truly revolutionary device instead of an (extremely advanced) accessory. 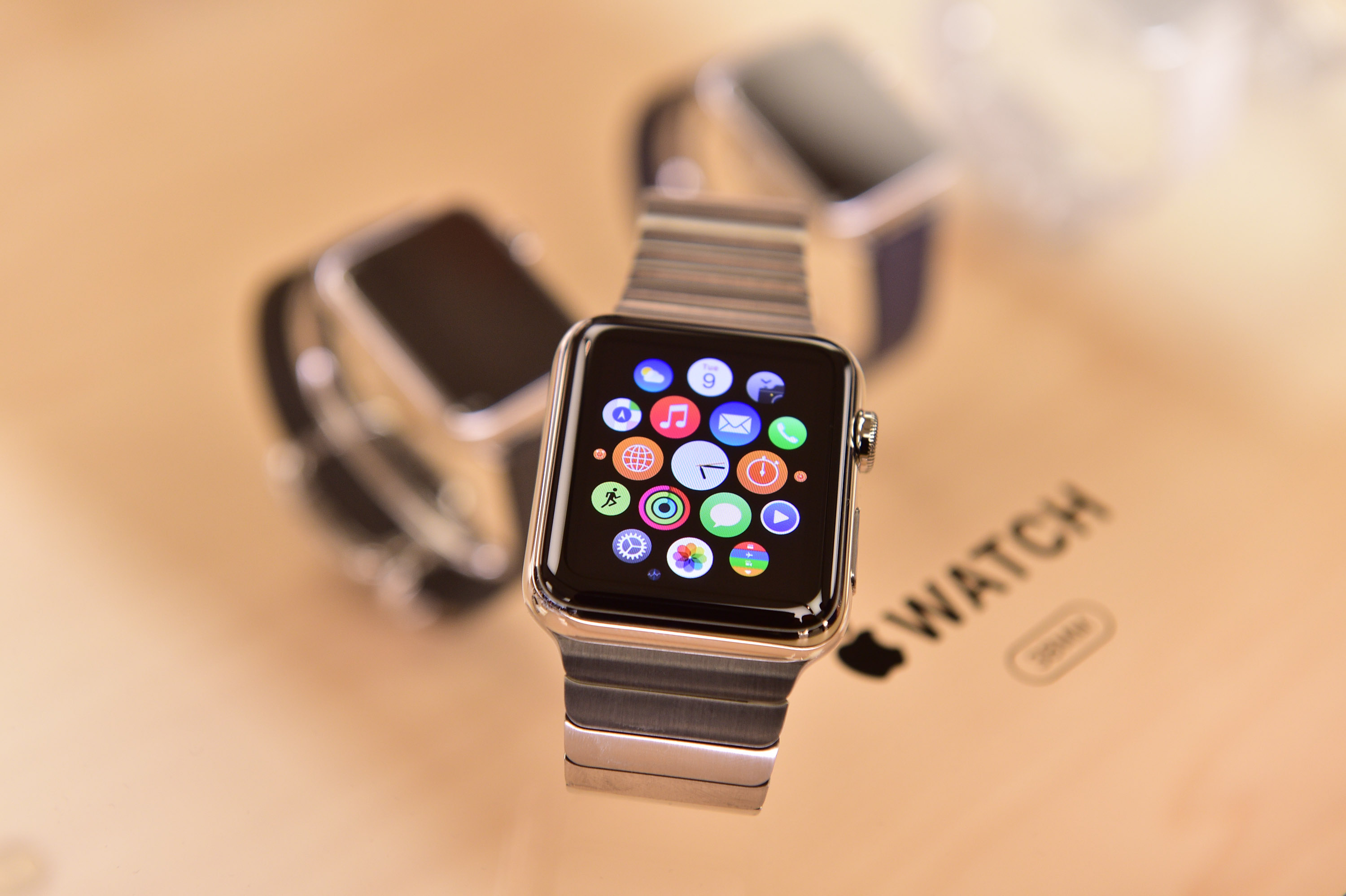 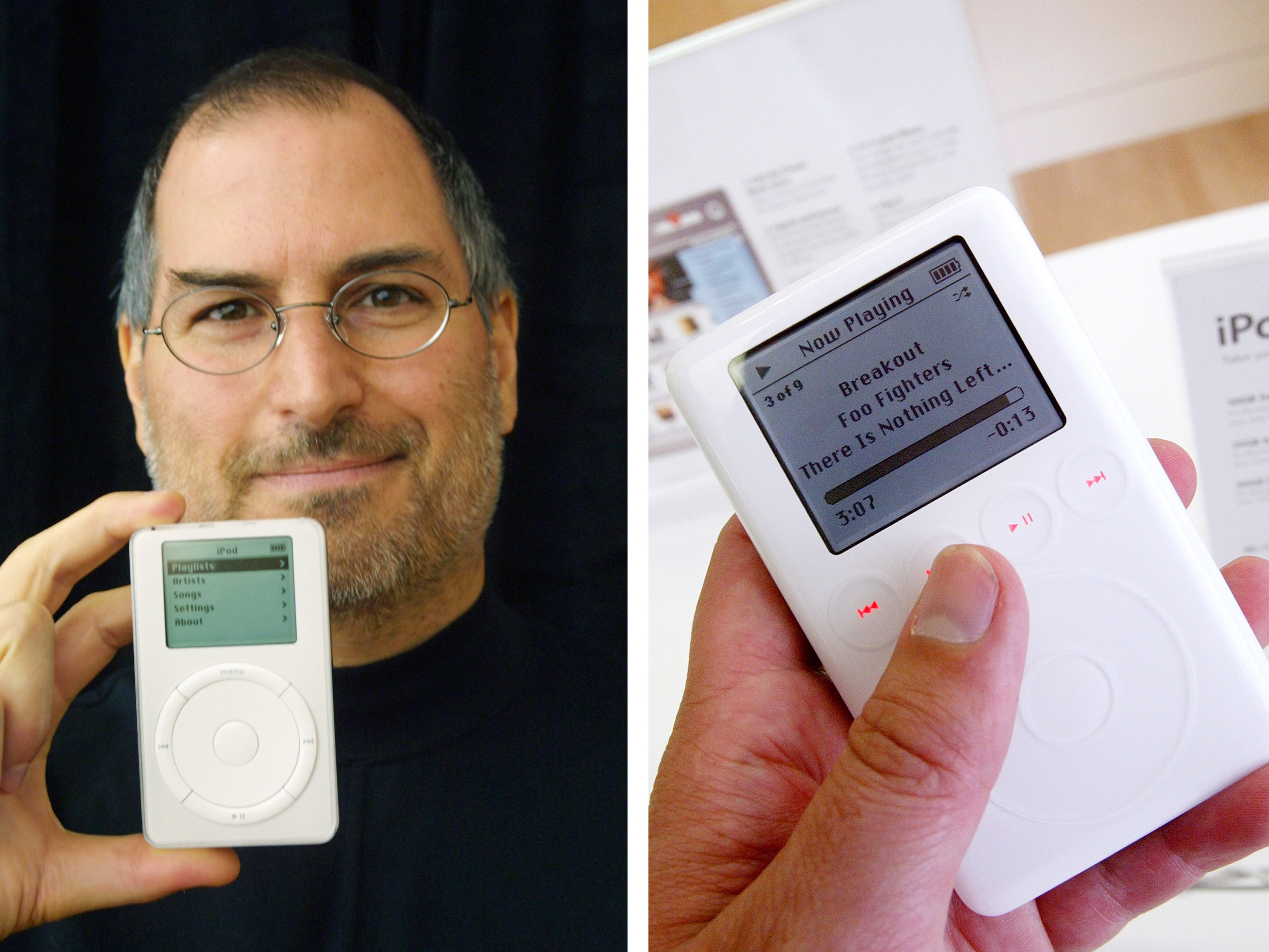 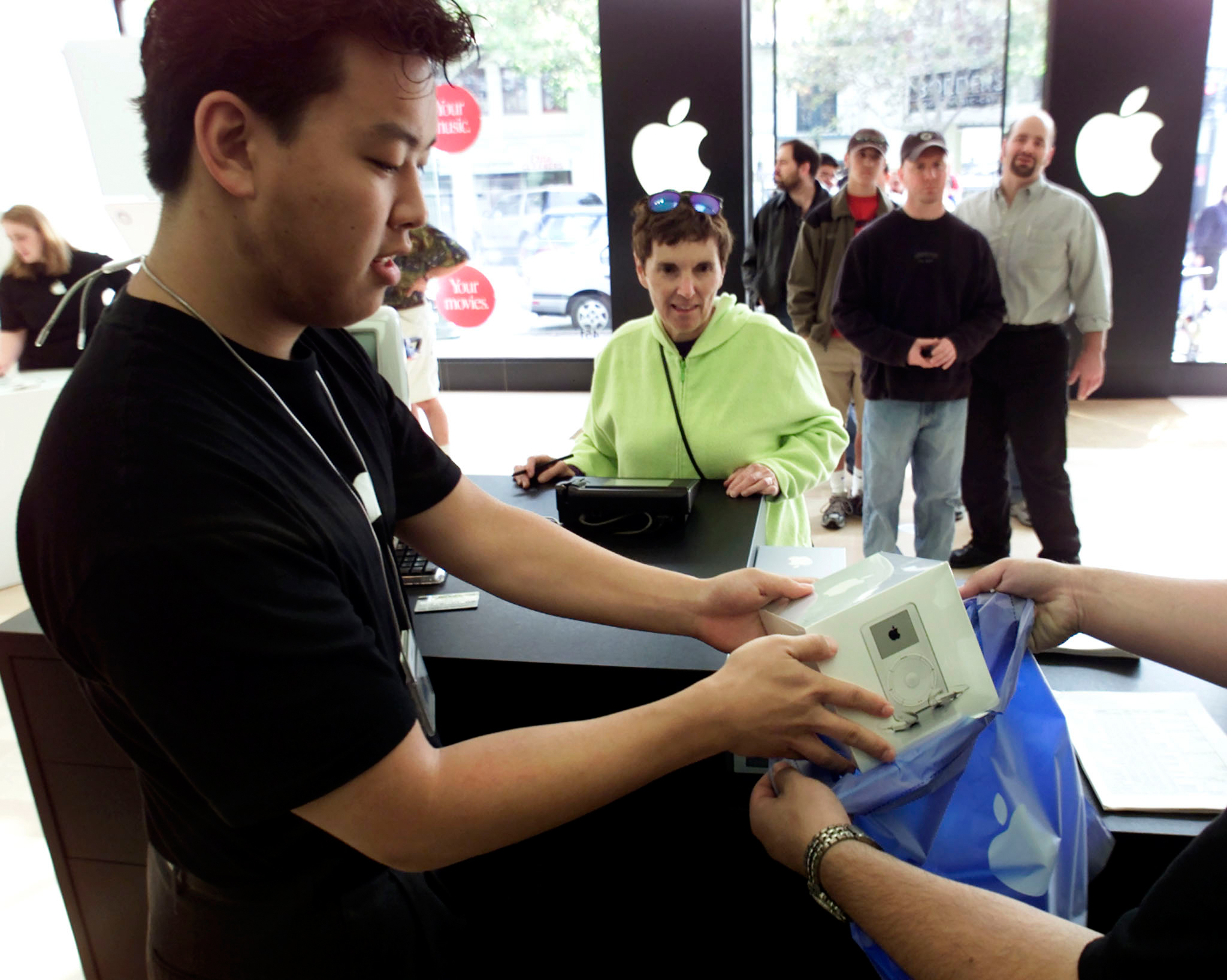 A salesperson bags a new Apple iPod MP3 player shortly after the Apple store opened in Palo Alto, California, November 10, 2001. Apple stores across the country hosted lines of eager customers wanting to be among the first to own iPod. The breakthrough MP3 player holds up to 1,000 songs and fits in your pocket.
Lou Dematteis—Reuters/Newscom 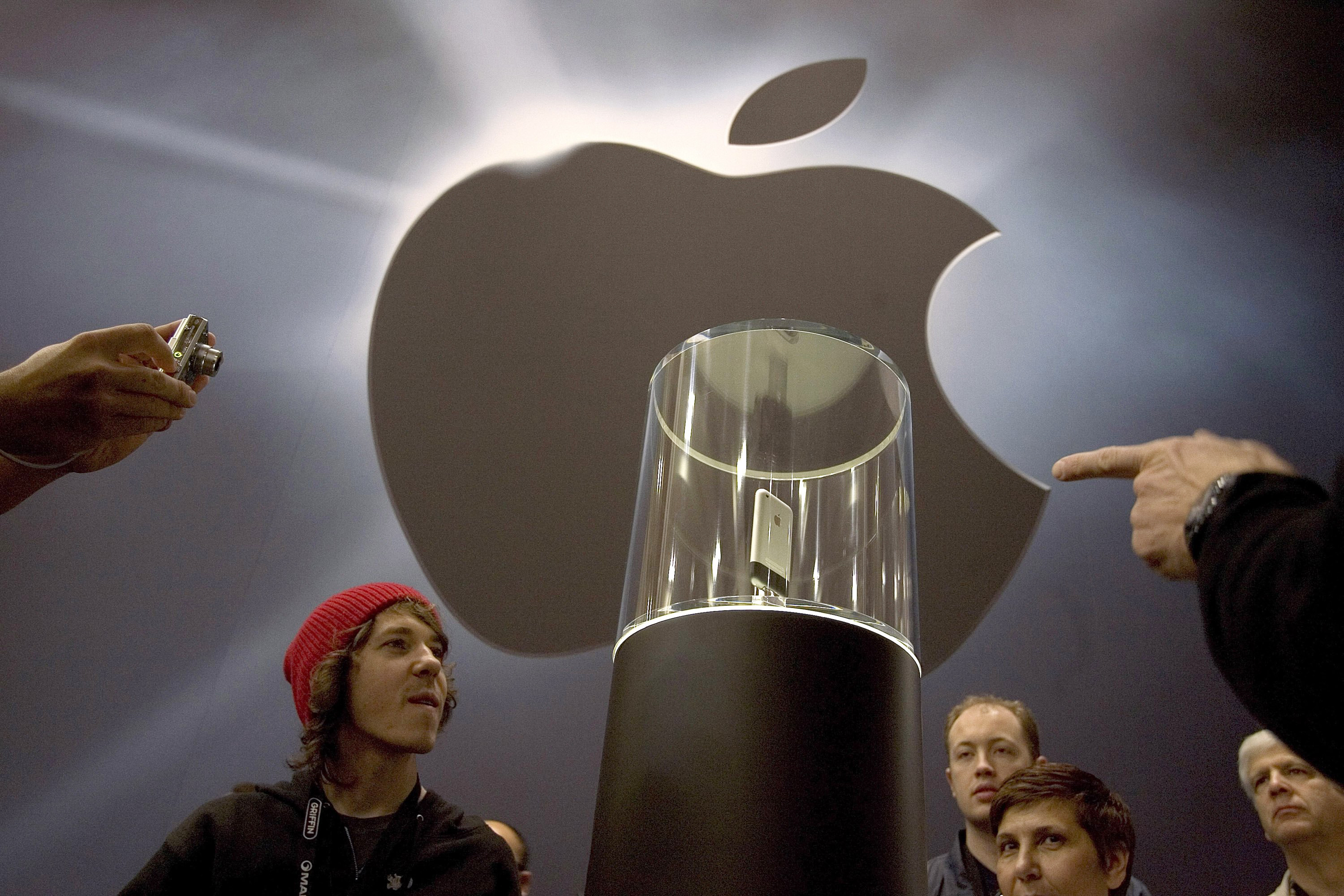 Apple released the first iPhone on June 29, 2007. An 8GB model launched with a price point of $599.
David Paul Morris—Getty Images 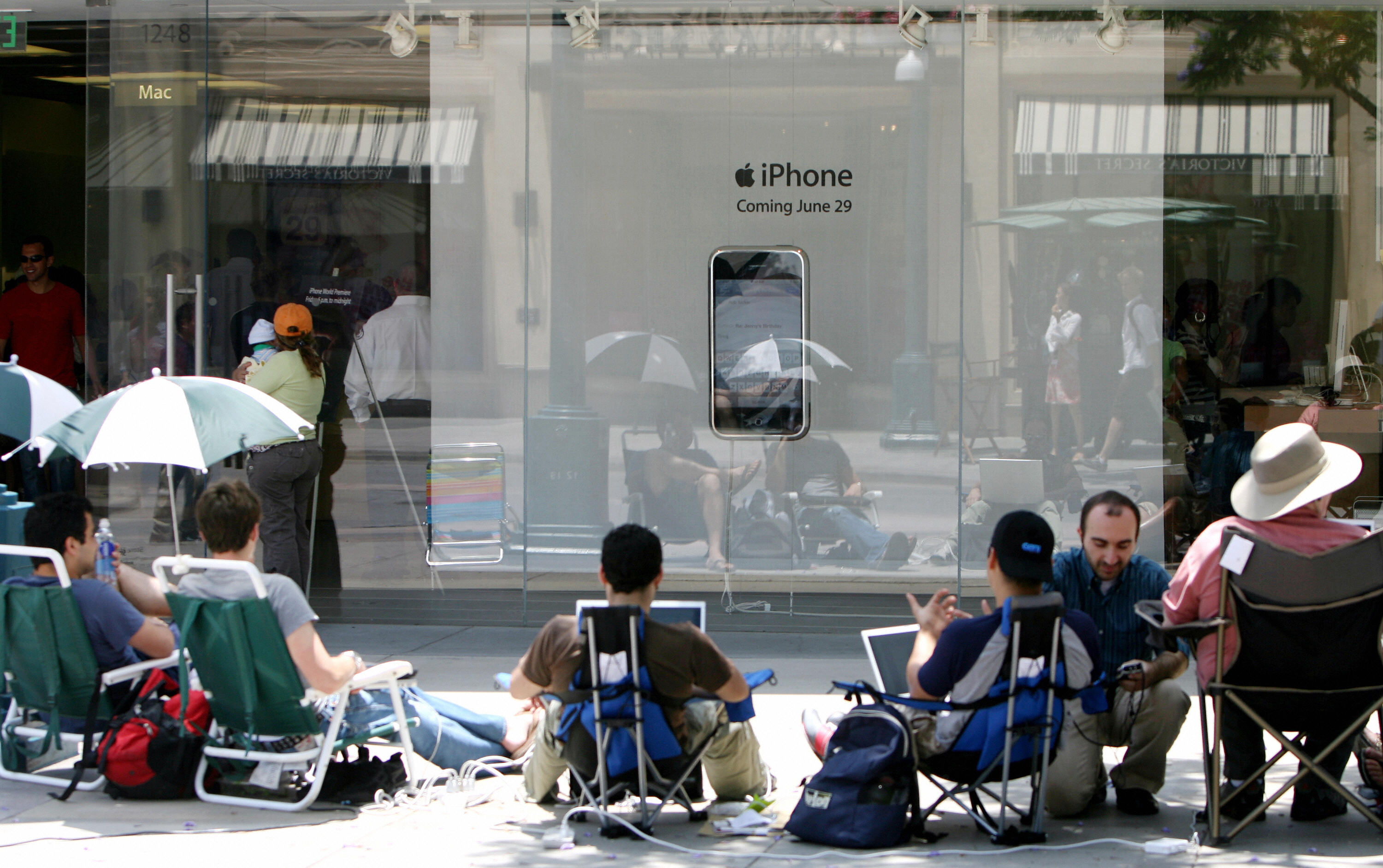 People wait outside an Apple store on June 28, 2007, in Santa Monica, California for the iPhone, scheduled to be released at 6:00 pm the next day.
GABRIEL BOUYS—AFP/Getty Images 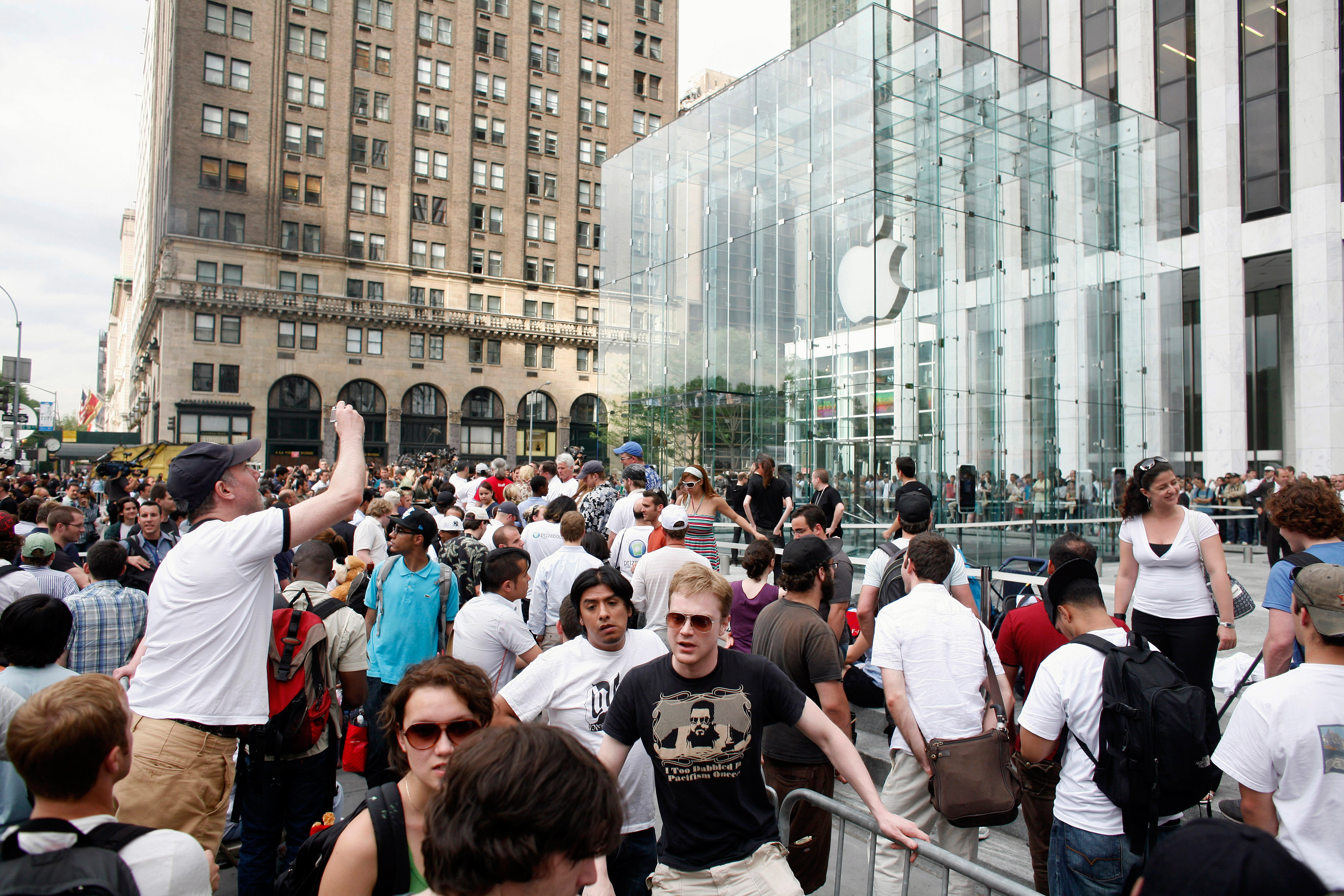 People line up to be the first to buy an iPhone at Apple's flagship store on Fifth Avenue on June 29, 2007, in New York City.
Michael Nagle—Getty Images 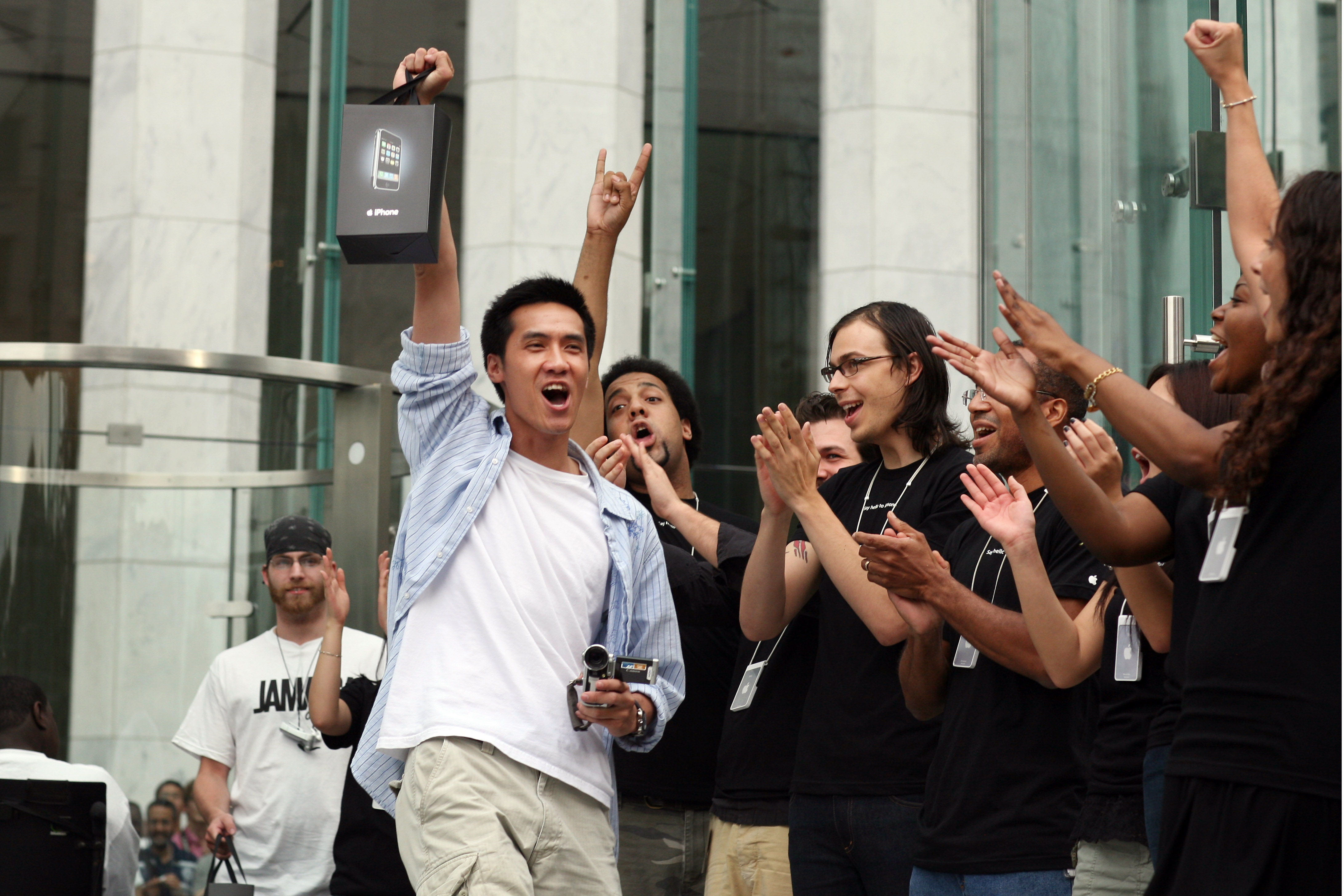 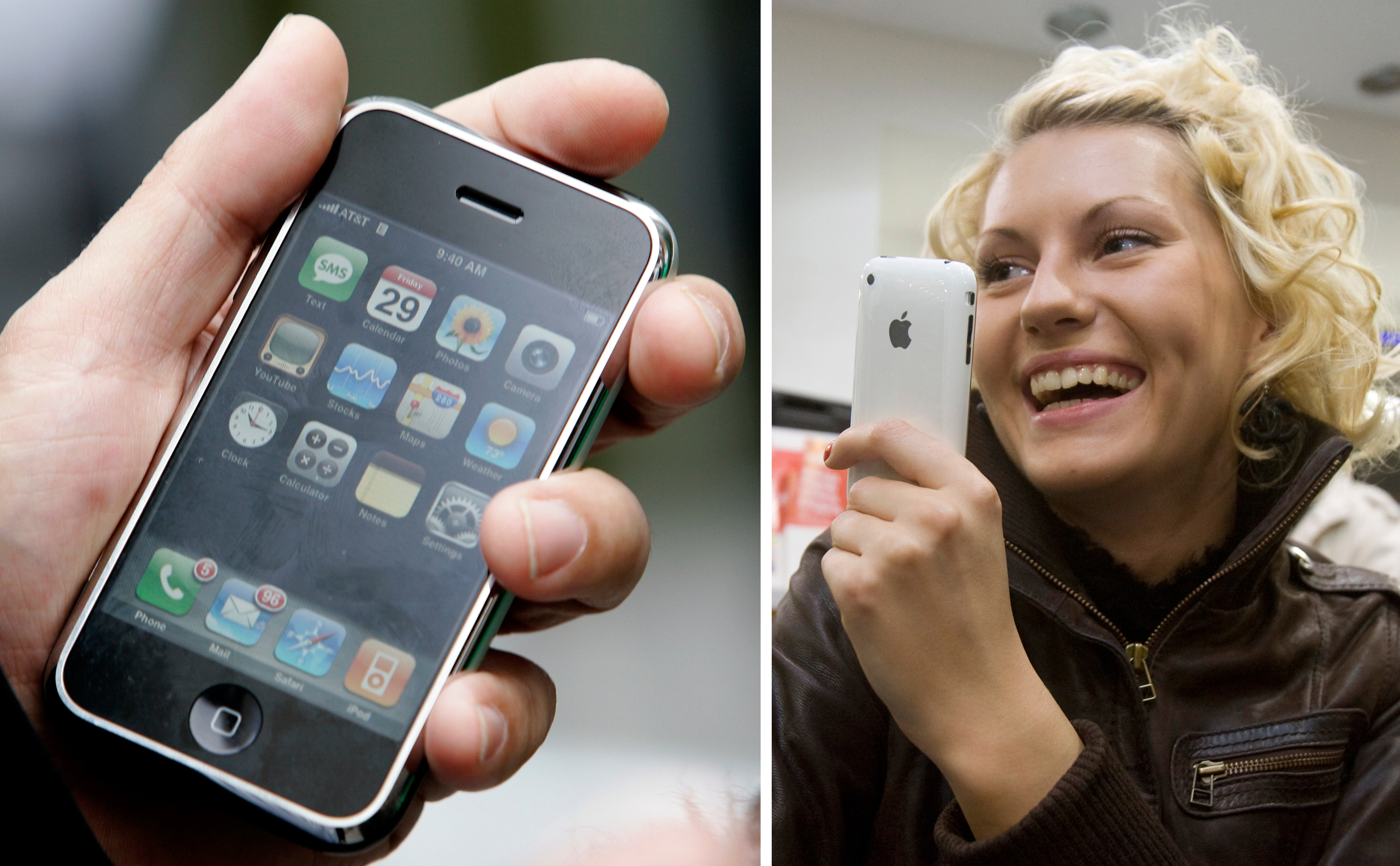 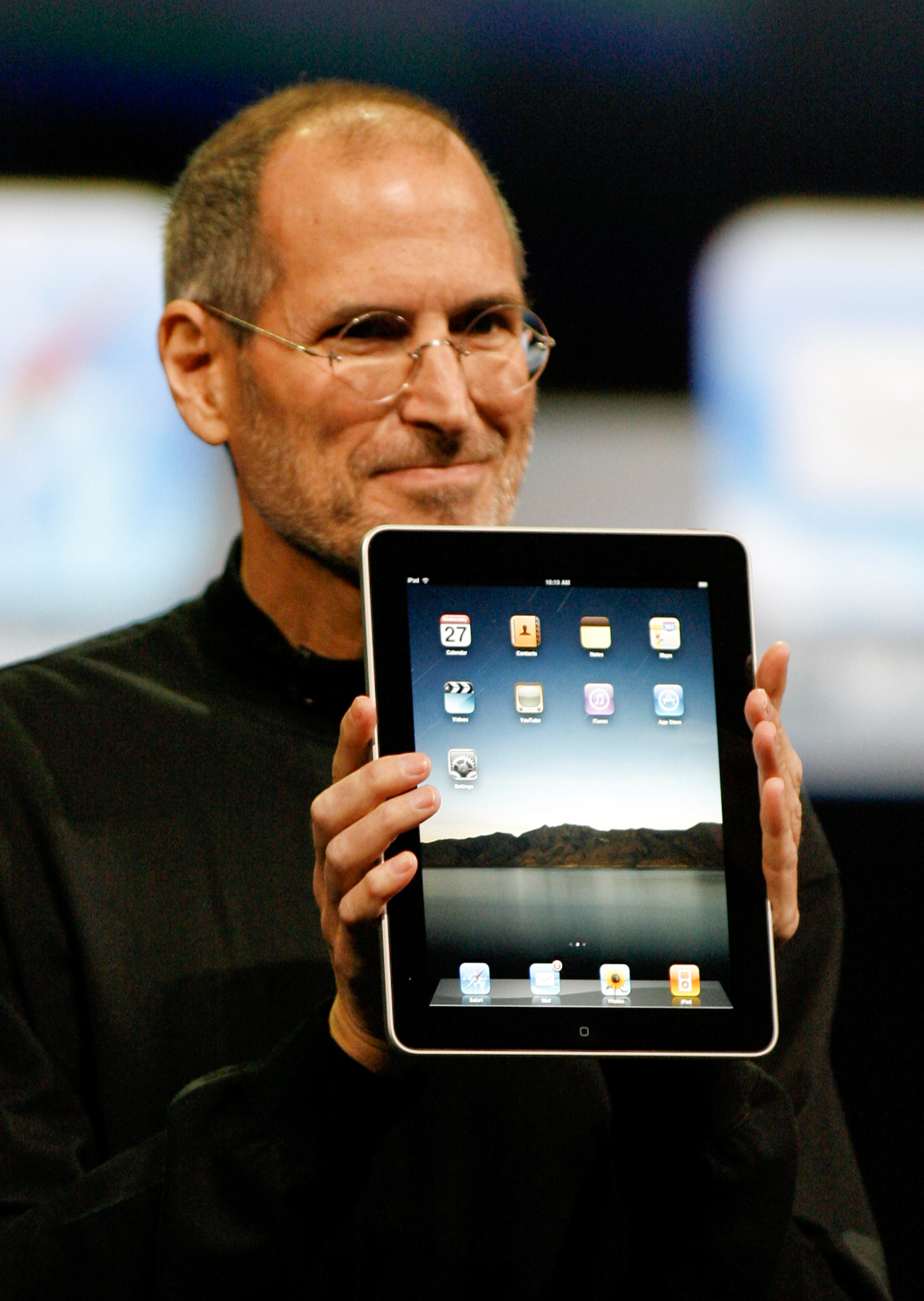 Apple CEO Steve Jobs holds an Apple iPad tablet during its debut at the Yerba Buena Center for the Arts Theater in San Francisco. The iPad would launch on April 3, 2010, with a price tag of $499.
Tony Avelar—Bloomberg via Getty Images 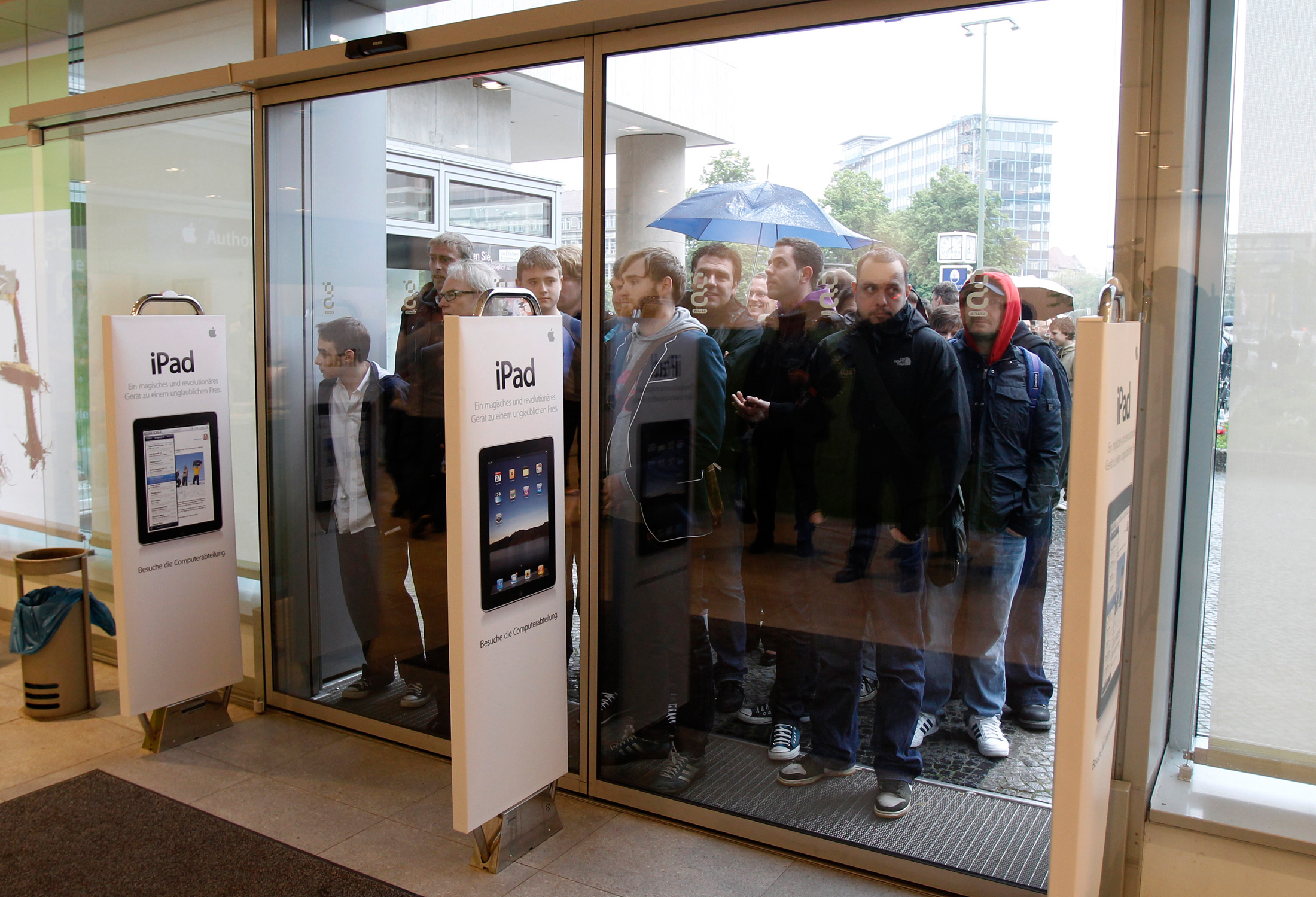 People wait in line to purchase Apple iPads during a launch event at the Apple retail store in Berlin.
Tobias Schwarz—Reuters 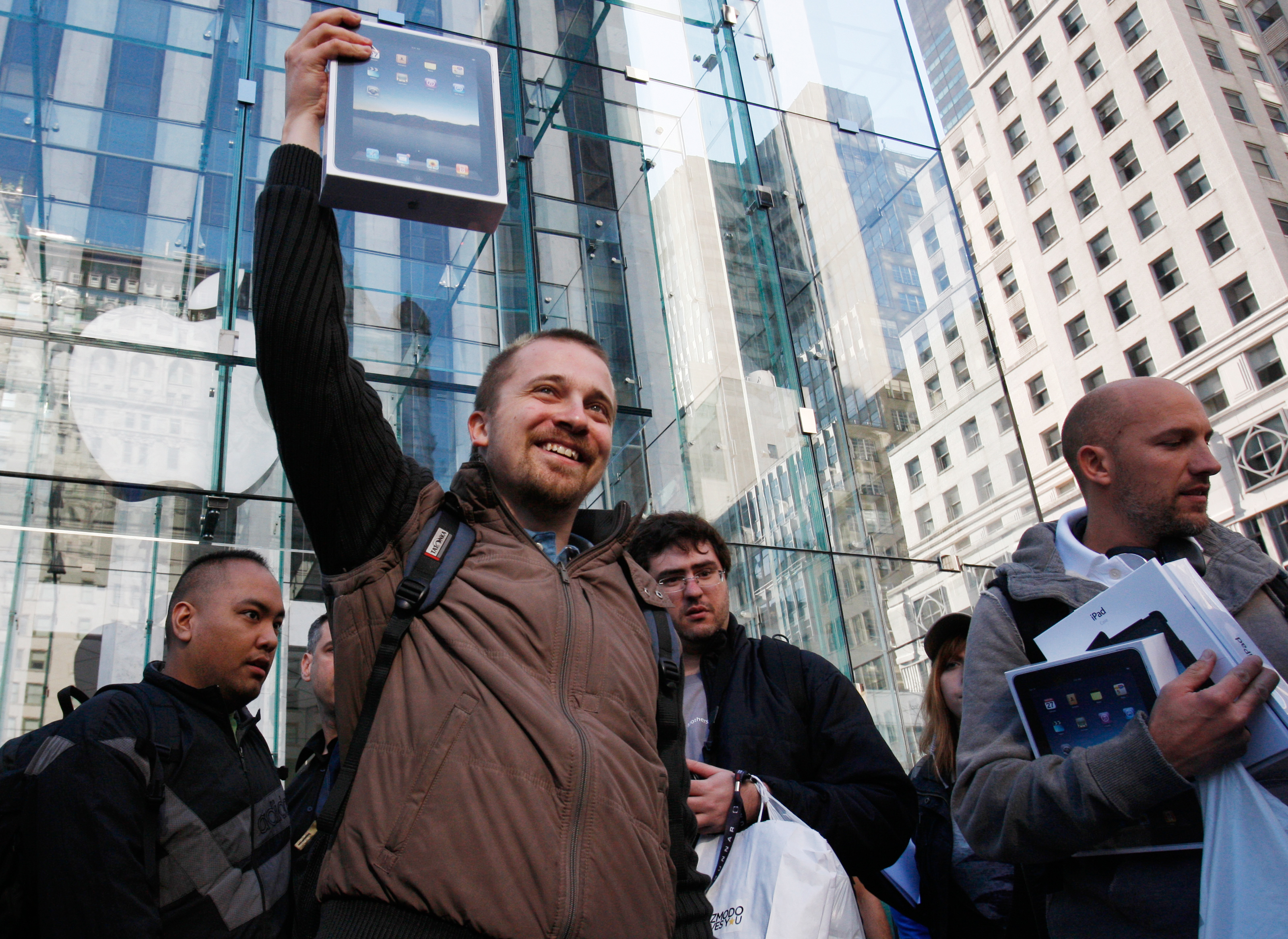 A customer lifts his iPad over his head after leaving the iPad launch at the Apple Store in New York.
Jessica Rinaldi—Reuters 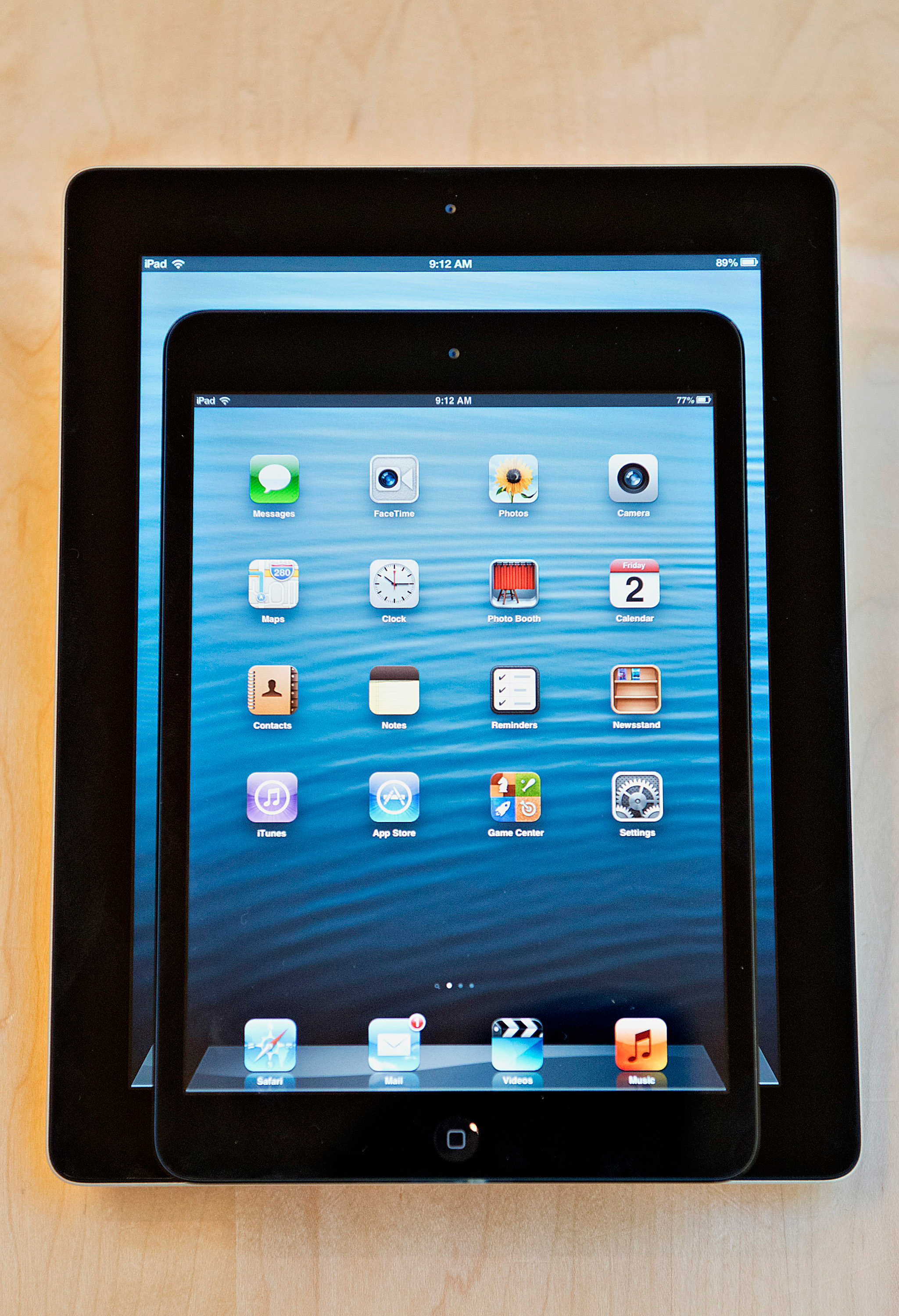 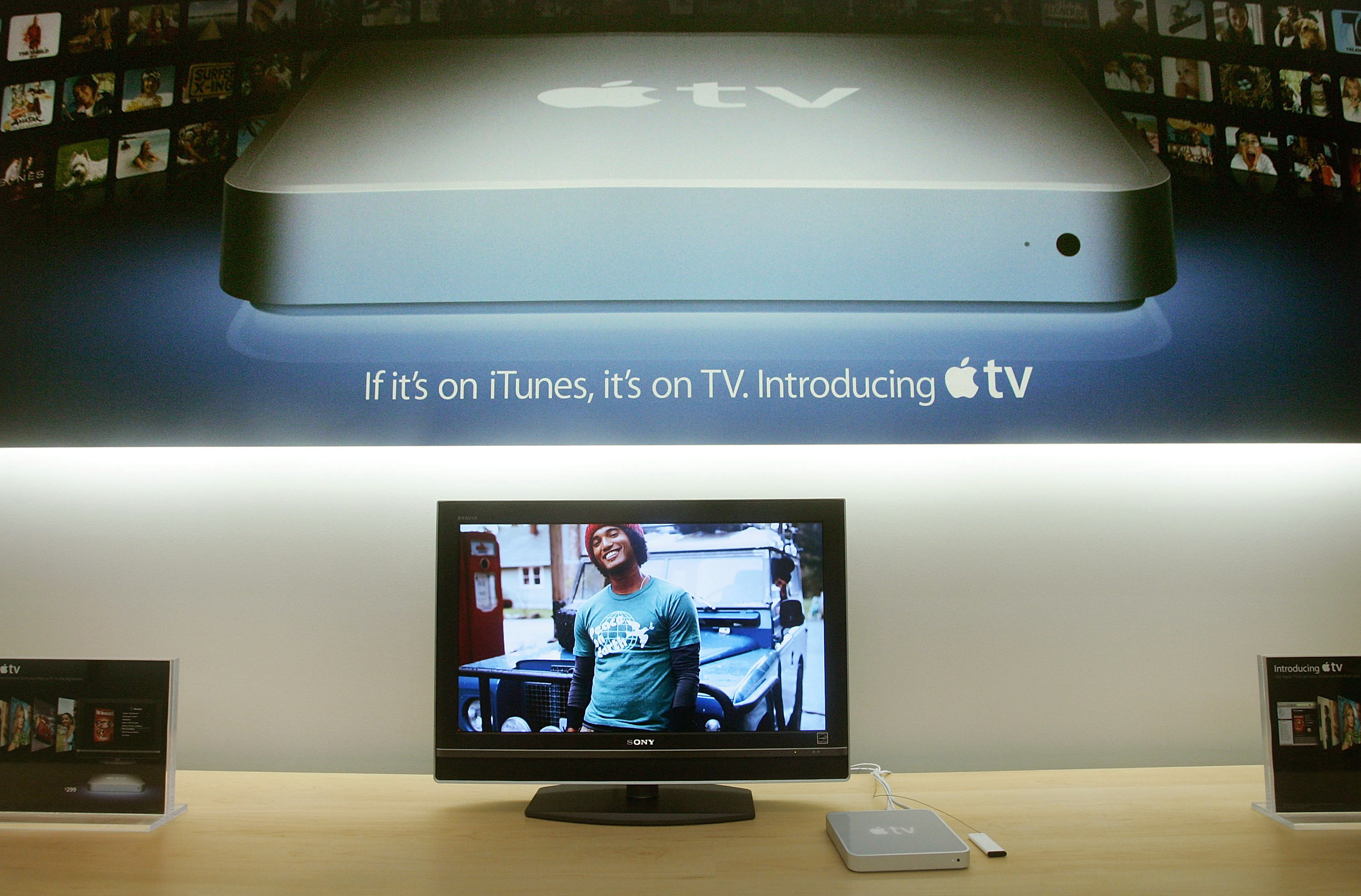 Called a "hobby" by Apple CEO Steve Jobs, the Apple TV appeared in stores on March 21, 2007. The device was priced at $299 and stored 50 hours of video.
Mario Tama—Getty Images 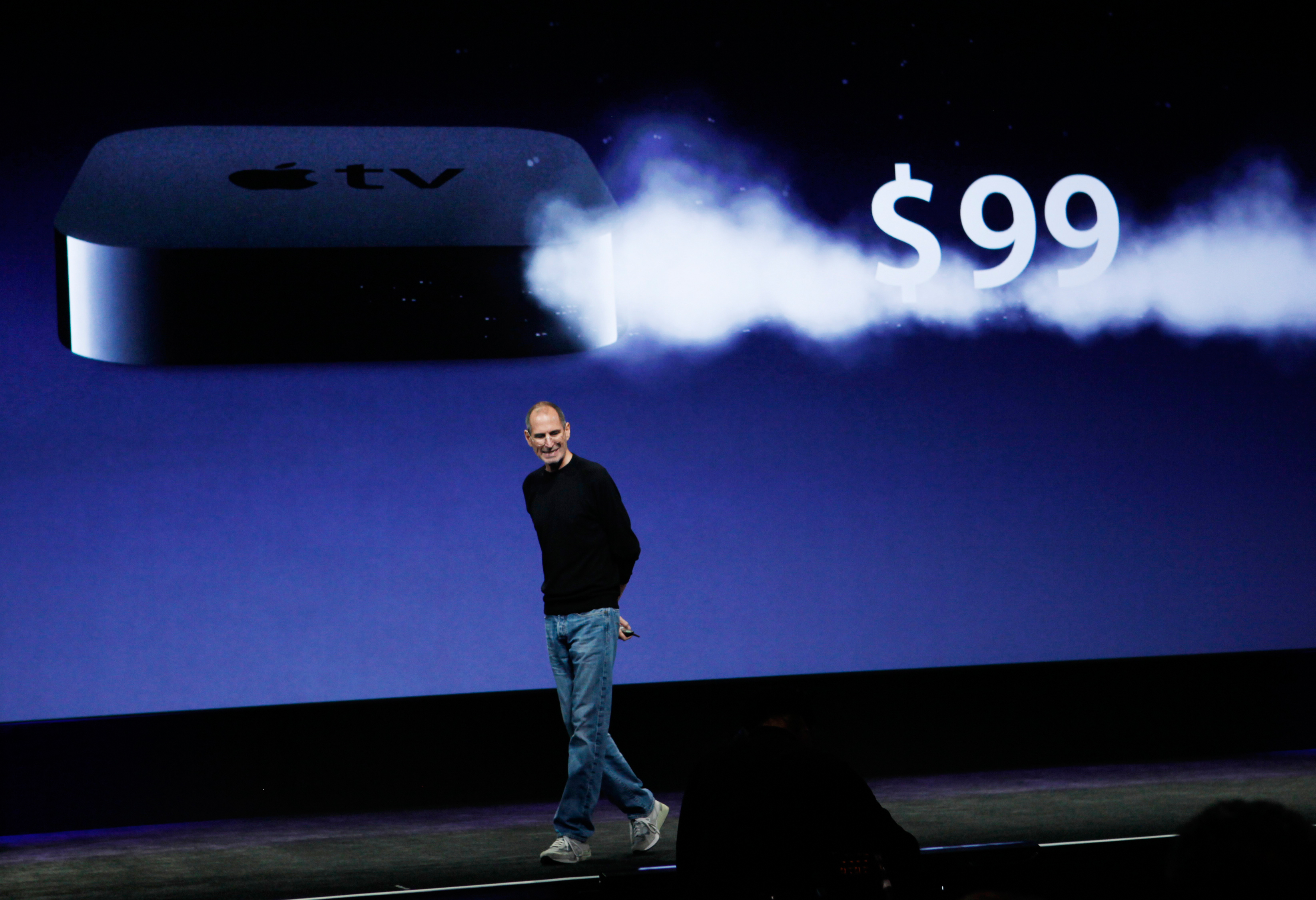 Three and a half years after the Apple TV's initial launch, Apple completely rebuilt the product as a much smaller device that streamed content from Netflix, YouTube, and users' home computers. The slimmer product also came with a slimmer price: $99.
Paul Sakuma—AP 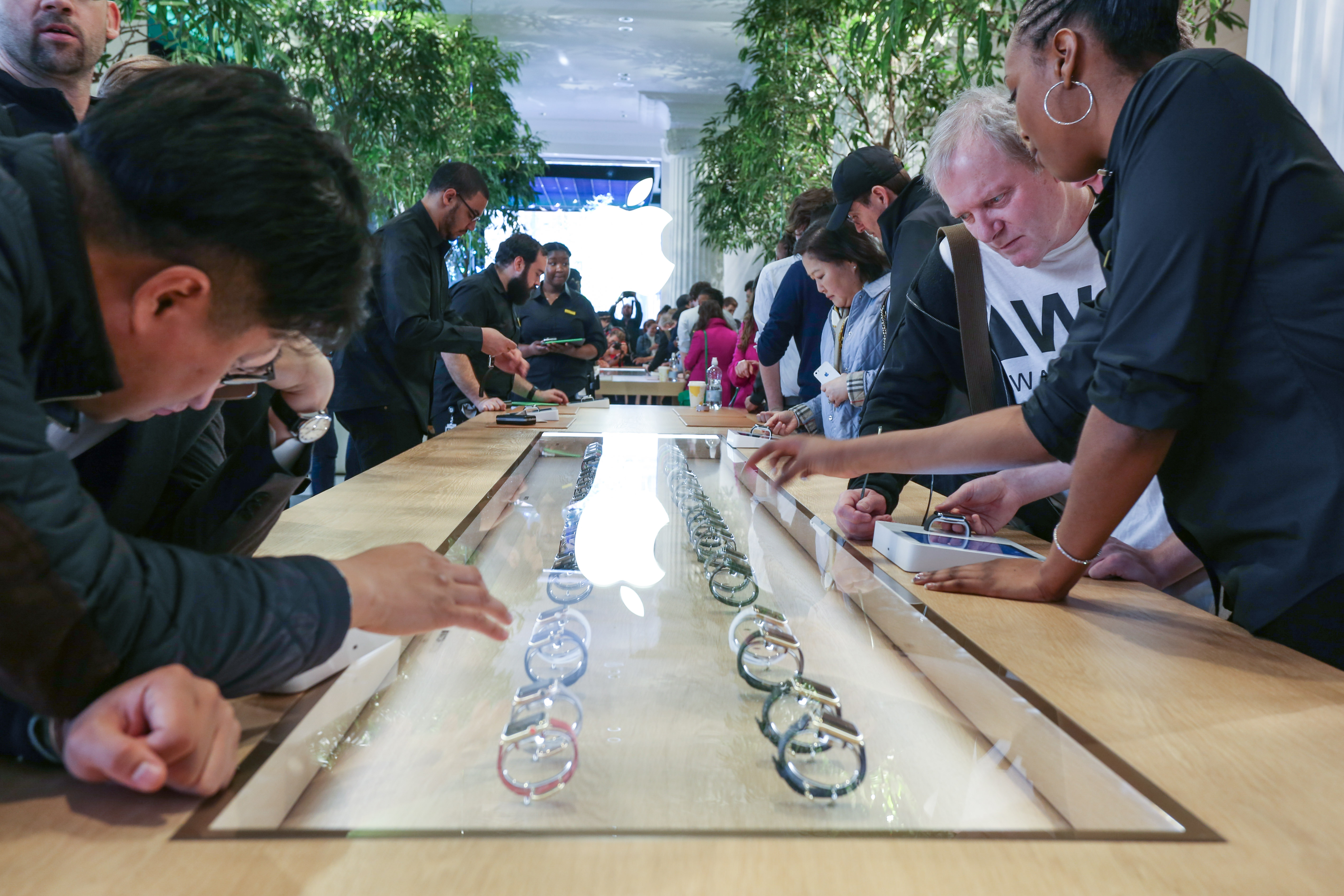 Onlookers gaze at the Apple Watch during a preview in London.
Tom Nicholson—AP 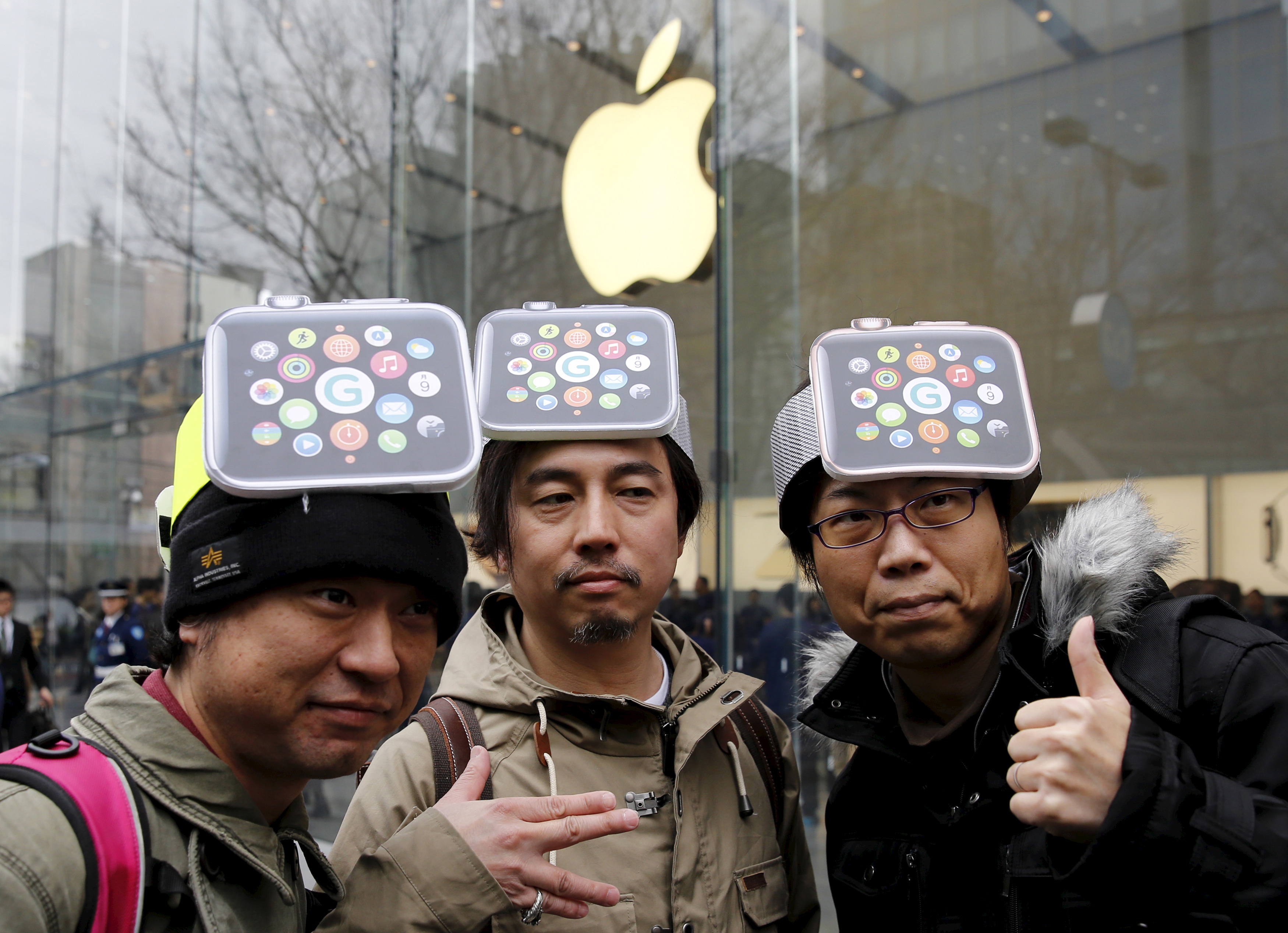 Men wearing cardboard Apple Watches on their heads pose for photos before it goes on display in front of the Apple Store in Tokyo's Omotesando shopping district.
Toru Hanai—Reuters 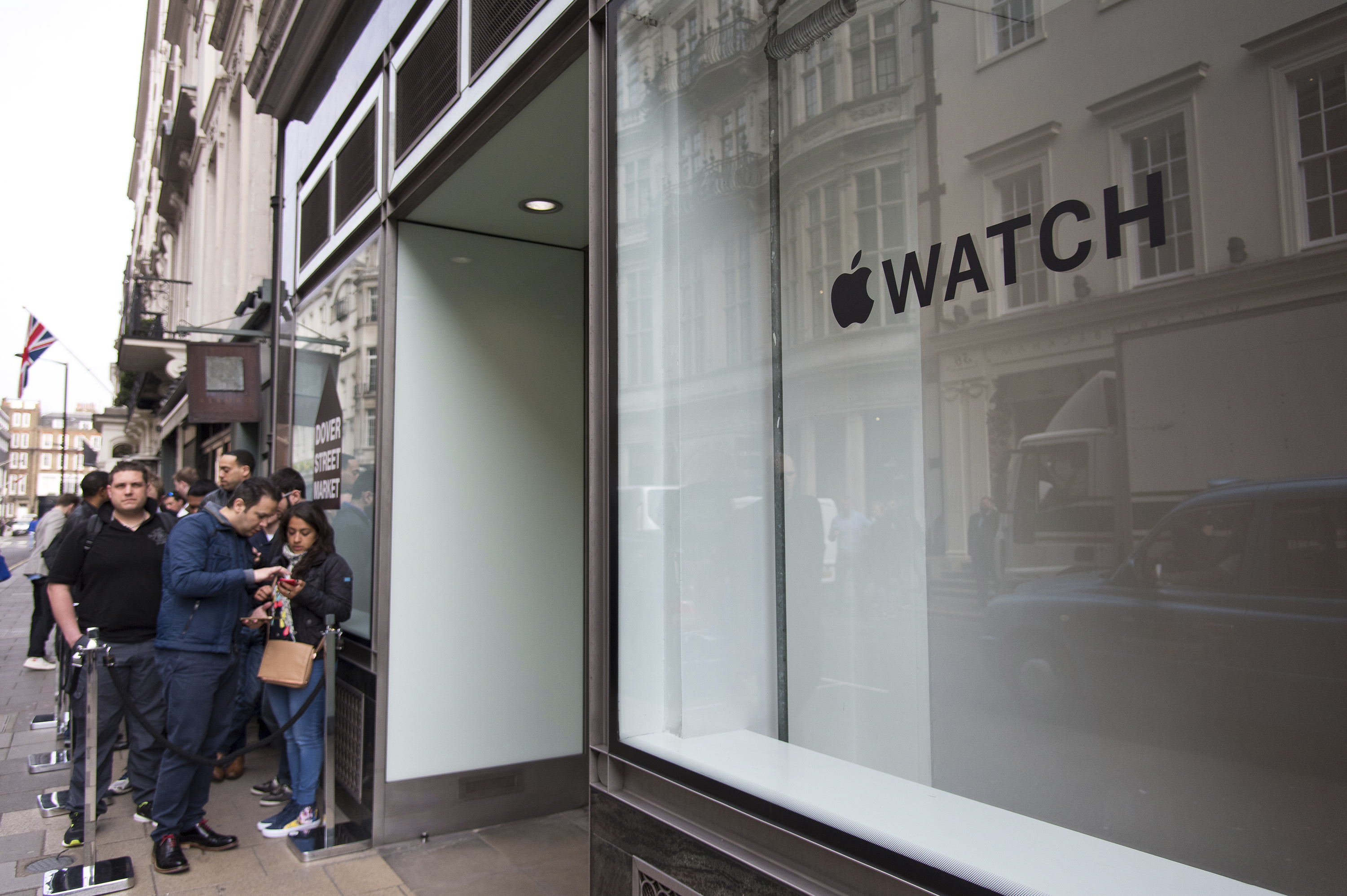 Line of customers waiting to purchase an Apple Watch outside Dover St. Market on April 24, 2015 in London City.
Ben A. Pruchnie—Getty Images 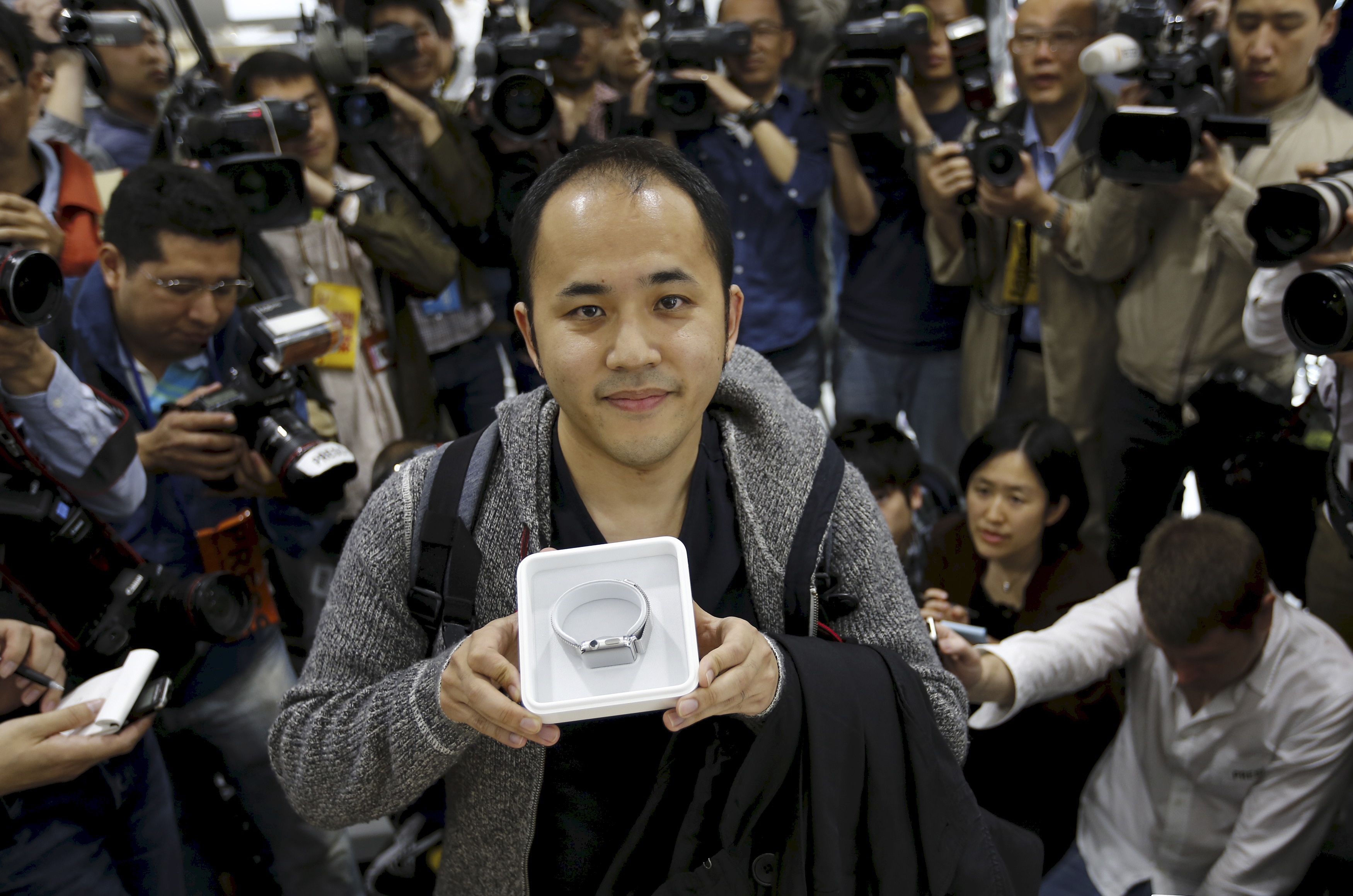 Yuichiro Masui, the first customer to purchase an Apple Watch at an electronics store in Omotasando, poses with his watch in Tokyo April 24, 2015.
Thomas Peter—Reuters
❮
❯
1 of 18

*Here’s how I crunched the numbers: The average includes the iPad, iPod, iPhone, and Apple TV. I didn’t consider the Macbook and Macbook Pro to be new products because both were extensions of a previous product line—the iBook and Powerbook, respectively—and launched at the same price points as their predecessors. I didn’t include the iPod touch, which Apple considers an extension of the iPod brand, for the same reason. I counted the original iPhone’s 8GB as the base model because the 4GB version was discontinued after less than three months.

What If I Forgot to Do My Taxes? And Other Urgent Tax Day Questions, Answered

The Secret to Saving More Money? Team up With Friends, Family or Even Complete Strangers