3 Rules for Low-Cost Living, From a Dad Who Shares a 1,000-Square-Foot Condo With 5 Kids 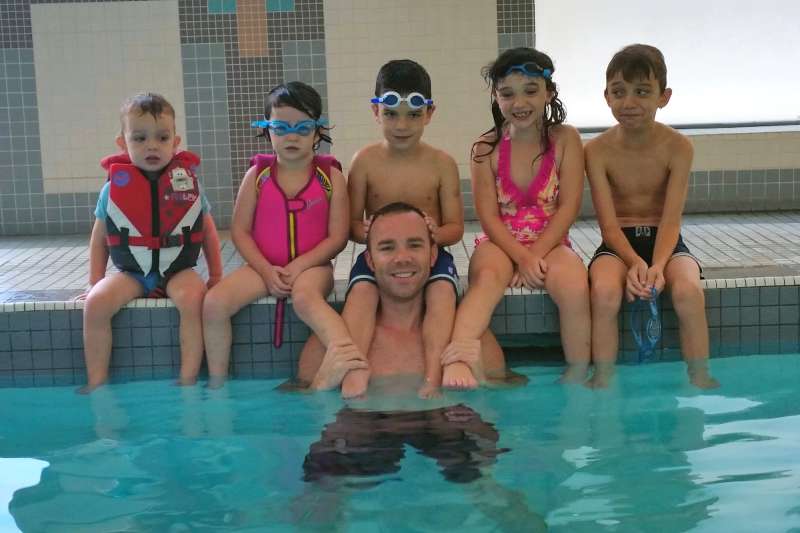 Adrian Crook with his kids in the condo pool.
courtesy of Adrian Crook

Like many young couples, Adrian Crook and his wife moved from the city to the suburbs when they had their second child.

Six years and three kids later, Crook divorced and moved back downtown into a 1,000-square-foot condo –- with five young roommates.

“You’re sort of told you can’t do that when you have kids,” says Crook, 42, of Vancouver. Indeed, the Crook clan happily bucks the conventional wisdom that children need a yard and a bedroom of their own.

The family lives small and saves big on time and money. “I’m a relentless maximizer,” says Crook, who recalls weekends given over to Home Depot when he lived in the suburbs. He rents his condo and isn’t tempted with renovations as he was when he owned a 2,500 square-foot home.

Crook, who works from home as a self-employed videogame consultant, plows the time he saves into his business and into spending time with his children, ages 5 to 11. The family doesn’t own a car and enjoys the city’s many attractions by foot, bicycle or public transportation. Favorite haunts include the Vancouver Art Gallery, which holds free family events on Sundays, and the local parks.

“My life is actually cheaper than yours—and a lot more streamlined,” he says.

You can’t take a haphazard approach to living in a small space with five children, at least, not if you want to maintain your sanity and a floor free of scattered toys. While the children don’t live with Crook full time (they spend about two weeks of every month with him) he’s designed an arrangement where they comfortably could and currently has no plans to upsize as his children move into their teenage years.

Crook chronicles his urban adventures at 5kids1condo.com. Here are three of his rules for successful small living:

While Crook is glad that his lifestyle saves him money, he’s hardly settling for the best he can afford. Instead, he has actively chosen a minimalist approach, and the smaller carbon footprint and relatively few belongings that it entails. He believes tight quarters help foster empathy in his children, and feels that urban living will help them to develop into socially conscious, independent young people. He explains the trade-off to his children, telling them that the reason they’re able to enjoy fun activities within walking distance of their home—whether that’s seeing a parade, ducking into the city’s main library or sampling the best hot chocolate in the city—is because they live with less space and less stuff.

In cities where land is limited, like New York and Vancouver, architects build up. The same goes for apartment-dwellers with limited storage space. Crook’s three boys sleep in a custom-made triple bunk bed that takes full advantage of his apartment’s tall ceilings. Toys occupy the bottom rows of shelves of the big Ikea bookshelf that occupies one living room wall. There’s no room for “big chunks of plastic,” Crook says. Instead, his children play with Legos and other modular toys that can be packed away out of sight.

Crook’s room features a Murphy bed that also contains a pull-down desk (when he wants to pull down the mattress, he folds the desk back up into the bed frame). His daughters share a bunk bed whose lower level morphs into a desk during the daytime. This multi-functional furniture saves space and also makes the bedrooms more inviting for daytime activities, so the living room doesn’t see all the action.

Adrian Crook’s master bedroom with a murphy bed that converts to his office desk.
courtesy of Adrian Crook