Breaking a Car Lease Can Be Costly If You Aren't Careful. Here Are Your Best Moves 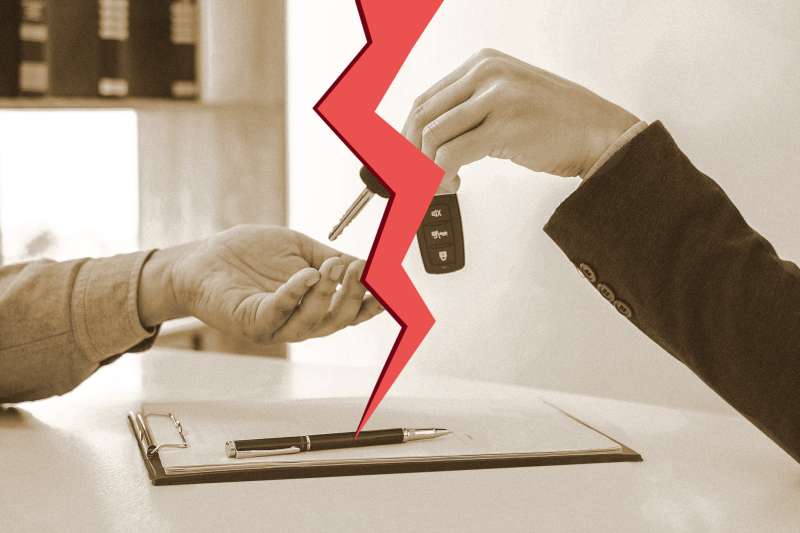 When money is tight, a car lease can seem like an obvious expense to cut. But getting out of the deal isn’t always easy.

About a third of the 274 million registered vehicles in the U.S. are leased, with average monthly payments of $450 lasting 36 months. Now with millions of Americans suddenly out of work, many of them are driven by people who can no longer afford their lease payments.

Swapalease.com, a company that runs an online marketplace for lease transfers, asks its customers why they want to escape their leases. It says it has seen a 66% jump in people who say that money is their motivation over the past few weeks.

If that’s the situation you’re in, you have options that can get you out of your vehicle lease.

Even if you're leasing your car, insuring it is still your responsibility.
Before you drive off in your new car, you're required by law to have it insured. For a free quote, click on your state.
Get a Free Quote

Sell the Car Back to the Dealer

A lease is a way of financing a car purchase. Like a loan, it involves making monthly payments over a set period of time. At the end of that period, a lease lets the driver either buy the car for its residual value or drop it off with the auto dealer.

The good news is that a dealer might be interested in reselling your leased vehicle as used, even before the least term is up, according to Curtis Folstad, former general manager of Luther Automotive Group in Minneapolis, Minn. Don’t forget, though, that dealers need to make a profit, so they likely won’t offer you the car’s full current value. That can leave you on the hook for having to cough up extra cash to exit your lease commitment.

For instance, maybe you have 24 months to go on your lease, with payments of $450 a month. The car’s residual value—the price it will be worth at the end of your lease—is $16,000. Right now your car should be worth, around $27,000 — reflecting all the remaining lease payments, plus the vehicle’s future residual value. A dealership might offer you $24,500, meaning you will be rid of the car but still need to kick in $2,500 to fulfill your full financial commitment and close the deal.

Sell the Car on Your Own

Kelley Blue Book makes cash offers for leased cars. Again, the company needs to turn a profit, so what they pay will probably be less than what you owe. Selling your car to a private buyer might bring you closer to your payout amount. Facebook Marketplace, Craigslist, and the web sites Autotrader.com, Cars.com, and Carsoup.com are all good places to list a leased vehicle for sale.

No matter where you sell your car, you’ll find it easier to get a price that lets you pay off your lease if you’re in the last year to six months of the lease.

Remember that a new car can lose 25% or more of its value as soon as its driven off the lot. That means in the first few months of a lease, you may still owe 90% or more of the car’s original value, while driving around a vehicle that could only be resold for something like 75% of what it was worth before you took possession.

As you continue making payments, however, the cost of paying off your lease goes down. By the last year to six months of that lease, the cost of paying off your commitment is close to the car’s market value—especially if you get a good price when you sell it. “I would most assuredly shop around,” Folstad says. “Take the car to a dealer, get a Kelley Blue Book offer, and get another one from CarMax, which is nationwide. That establishes the wholesale value.”

Then think about how much time you’re willing to spend on marketing your car to a private purchaser, as well as how much more money you might gain as a result. “If you can get away without becoming a car salesman over the weekends, that’s most people’s preference,” Folstad says. “You might or might not get away without paying in addition to what the buyer offers you, depending on how much time you have on your lease and how much demand there is for your car.”

Get a less expensive lease

A dealer might forgive the last six months or so of your lease payments if you lease a new car from them. That could let you trade your current payments for a lower monthly tab.

Volvo forgives the last six to nine months of lease payments owed when the customer leases a new Volvo, says Mike Theisen, general manager of Kline Volvo Cars of Maplewood in Maplewood, Minn. “You could get into a new car for the same or lower payment,” he says.

Car insurance protects more than your car.
Protect yourself and your loved ones with a car insurance policy that fits your needs. Click below for a free quote.
Get a Free Quote

Find someone to assume your lease

Like some home mortgages of yore, many automotive leases are assumable. Another qualified leasee can step into your shoes, make your payments, and have the same choices at the end of the lease. “I had a friend who did this with a Ford F150,” Folstad says. “He was a Ford employee when he leased the car, so his lease had a very attractive rate.”

To assume a lease, someone will need a credit score in the high 600s or better, says Scot Hall, executive vice president of operations at Swapalease.com, which matches parties on the opposite sides of a lease swap. Craigslist, Facebook Marketplace, and word of mouth are other places to find an interested customer. The person who assumes the lease must submit a credit application to the leasing company, and both people sign paperwork indicating that the vehicle and agreement are changing hands.

Customers who assume leases like the short-term commitment, Hall says. In most exchanges, no money changes hands, though either side might pay the other a premium to make up for discrepancies in monthly payment or mileage.

You’re responsible for your vehicle until the lease hand-off is official, so don’t let a friend unofficially drive the car and make the payments. “If the borrower gets into an accident or something else happens, that will come back on the person who is leasing the car,” Theisen says. “You’re still responsible.”

The Best Car Insurance Companies of 2020

It’s Becoming Harder to Refinance Your Mortgage. Here’s What Lenders Say Will Get You Approved

Small Business Owners Fear They Won’t Survive a Continued Shutdown. Here Are the Industries Most At Risk