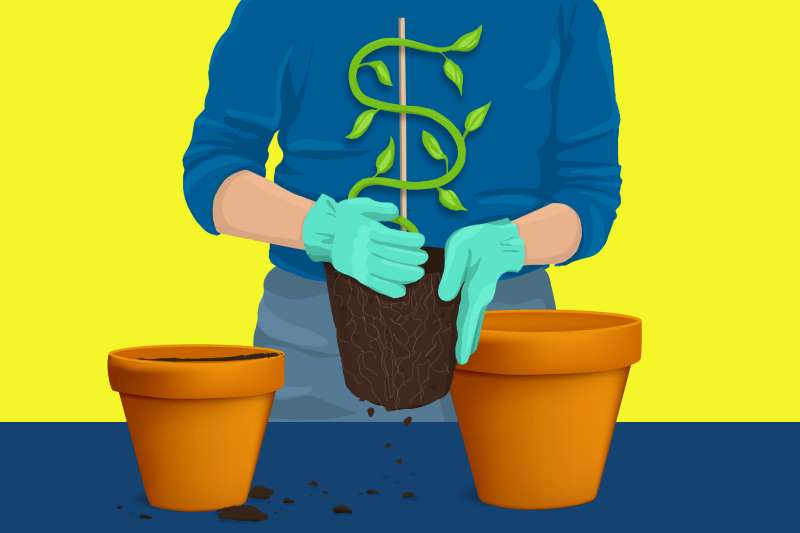 With coronavirus tanking the stock market, it doesn’t feel like a great time to be an investor. One potentially smart move you can make right now: Convert your IRA to a Roth.

Like a traditional individual retirement account, a Roth IRA gives you a tax break to save for retirement. It differs from a traditional IRA in one key respect: taxes. With traditional IRA, you contribute pre-tax dollars. You get a tax deduction now, but pay income taxes on your account withdrawals when you’re retired.

For Roth contributions, on the other hand, you use post-tax money. You don’t get a tax deduction now, but all your withdrawals — both principal and growth — are tax free.

Roth accounts have a couple of other benefits, too. Because you’ve already paid taxes on the money, you can take Roth contributions (although not investment earnings) out of your account whenever you like. Traditional IRAs make you either wait to age 59 ½ or pay a penalty, plus taxes due on the income. Traditional IRAs also require distributions, beginning when the investor is 72. If you’re lucky enough not to need the money in your Roth, you can let it keep growing and either spend it later or leave it to your heirs.

You can even have both a traditional IRA and a Roth IRA and take money from each according to your tax situation in retirement. “That gives you a lot of flexibility,” says Wade Pfau, a professor of retirement income at the American College of Financial Services in King of Prussia, Pa.. Spend money from your traditional IRA as long as those withdrawals keep you in a desirable tax bracket. If you want to spend more, take the extra from your Roth IRA — without moving into a higher tax bracket.

If you’ve already started a traditional IRA or other deferred-tax investment plan, you can switch to a Roth. There’s a catch: you’ll have to pay income taxes on the account balance in the same year you make the conversion.

There’s probably no good time to have a bigger tax bill — but if there were, this year would be that time. Doing a Roth conversion when the market is down means that your account is worth less, so your tax bill is smaller.

In other words, imagine that you had a traditional IRA that was worth $200,000 on January 1. If you’re in a 33 percent tax bracket, a January 1 Roth conversion would have cost $66,000 in federal taxes.

Maybe that same imaginary account lost a third its value in the mid-March market crash. Now you’re converting an account worth $133,000, and your federal tax bill is $44,000 (or less, if loss of income puts you in a lower tax bracket). History suggests that your investments will recover their value. When they do, says Scottsdale, Ariz.-based financial planner Amy Shepard, “that recovery will happen in a tax-free account.”

Of course, if your personal economy has also taken a hit, you might have trouble finding the extra cash you will need to set aside for the tax bill. The economic stimulus package lets you take money from your traditional IRA without penalty this year.

In a perfect world, you wouldn’t sell portfolio assets. You’d keep them where they are and let them recover. If you have many years before retirement, however, a one-time, penalty-free withdrawal might be a reasonable tradeoff for tax-free spending in retirement.

If you withdraw money from your retirement or 401(k), a high-yield savings account could be a great place to store your money.
High-yield savings accounts are used for emergency funds and storing savings for future events. They pay a yield that’s higher than average, allowing savers to reach their financial goals faster.
Open an Account Today.

5 Productive Things You Can Do While In Quarantine

Making Over $65K Per Year? Here Are 9 Smart Money Moves You Can Make Now