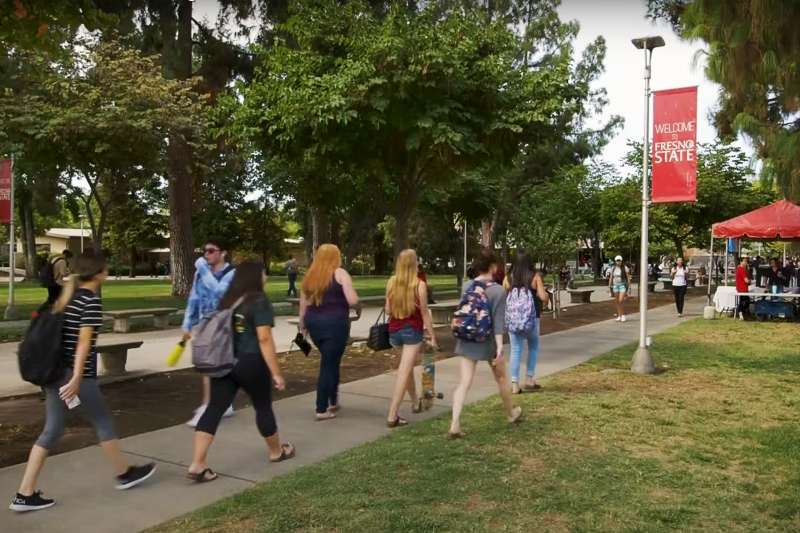 California State University, Fresno recently received $32 million of the more than $525 million given to the California State University system via the CARES Act. Of that $32 million, $16 million was provided to students as emergency grants. The money is meant to help students pay for things like food, housing, childcare, healthcare and course materials, amid the economic turmoil caused by the coronavirus.

Emergency aid should go to the students who need it most, which is why I was incredibly disappointed to see that the U.S. Department of Education has gone to great lengths to turn its back on some of the most vulnerable students in our community: Dreamers or DACA students.

Cover your college expenses with the help of a Student Loan.
For help covering college tuition and other costs, a Student Loan can aid you in your time of need. Find out more by clicking on your state.
Start Today

Weeks after the law was passed, the Education Department told colleges they could not use any of that grant money to help international students and those with Deferred Action for Childhood Arrivals status. Several Congressional leaders later wrote to Secretary of Education Betsy DeVos, asking her to reverse that directive. Taking a step further, the California Community Colleges system and Washington state attorney general have both filed lawsuits against the Education Department.

It’s hard not to think that leaving out DACA and other international students from receiving aid wasn’t purposeful, as other lobbying and government officials have said there is nothing in the law preventing the federal government from issuing grants to those who are not eligible for Title IV funds. This is just the latest snub from the U.S. government to Dreamers looking for a better life.

These students are not eligible for federal student aid, putting them at a distinct disadvantage to the general college-going population to enroll and complete their degrees. While this door is shut, the patchwork solution by individual states varies wildly in terms of providing in-state tuition benefits and financial-aid resources. Although 11 states, including California, offer state financial assistance to undocumented immigrant students, six states explicitly bar them from eligibility of in-state benefits.

Nevertheless, Dreamers are already making a significant investment in their communities and a positive impact on the economy. Some own homes. Nearly two-thirds own vehicles, and more than 9 in 10 were employed before COVID-19 impacted the economy.

In California alone, the estimated economic impacts of ending DACA would be an $11.6 billion loss of gross domestic product. Texas, New York and Illinois would also lose billions in GDP. The Cato Institute reports that deporting DACA individuals would cost nearly $93 billion in lost tax revenue and result in a reduction of $351 billion in economic growth over the next decade. Imagine the impact they could have if we didn’t actively hinder them from attaining a college education.

Because so many typical avenues for assistance have been closed off to this important group of students, institutions have had to seek private sources of funding to ensure both the academic and basic needs of students are met. At Fresno State, we continue to support our Dreamers in various ways, including The Good Samaritan Grant and our Bulldog Retention Grant to help with financial hardships, as well as the Student Cupboard, to provide fresh foods to all of our students in need.

In the past several weeks, the needs for these resources have grown considerably. For the Good Samaritan Grants, which typically range between $500 and $1,500 each, we had distributed 111 awards through the bulk of the 2019-2020 academic year. But over just a three-week period in April, we nearly doubled those needs, with 96 total student applications.

The Student Cupboard likewise has met increased demand. Total food distributed has increased and in an effort to cut down on direct contact of students gathering items off shelves, the cupboard has begun pre-packing bags to meet their needs. While total student visits have declined the past month, as the vast majority of students left campus, students now take as many as three or four of our pre-packed bags.

While we’re thankful we have these resources to help meet these needs for all of our students fairly and equitably, the CARES Act plays favorites and ties our hands of additional resources that could make a substantial difference during these trying times.

In the next few weeks, a Supreme Court verdict will determine the fate of the nearly 800,000 undocumented immigrants who are enrolled in the DACA program. While it is my sincere hope the Supreme Court will make the correct decision and provide permanent protection for Dreamers, I am continually mystified that we find ourselves in this predicament in the first place.

Too often, there seems to be a fundamental misunderstanding about who these Dreamers are. These are young people who were brought to the United States as children, through no fault of their own. They’ve lived here, grown up here, in some cases even served this country, yet we’ve continually gone out of our way to remind them that they are “less than.” While there are nearly 1.9 million people eligible for DACA, the program has accounted for roughly 800,000 people.

As a university president, I work closely with these students and employees. The California State University System intentionally does not collect or track a specific figure, because a student’s DACA status has no bearing on enrollment status. But we estimate nearly 10,000 individuals spread across the 23 campuses, including at Fresno State, and they’ve provided tremendous contributions to our communities. A number of Dreamers have been recognized for academic distinction in the CSU System.

We call these folks “Dreamers” because they are both part of a holistic American dream and individuals who are trying to live their own American dream. Our country talks a lot about being proud of our diversity, yet we’ve refused to make a permanent and substantive investment in these individuals.

In an era where the term “essential employees” is now common, Dreamers account for a sizable portion of this workforce in healthcare and other vital areas. We could never afford to turn away so much eager and hardworking human capital, but amidst a pandemic, each Dreamer plays an even larger role.

Joseph Castro is president of California State University, Fresno and the grandson of immigrants from Mexico.

Student Loans can offer financial aid during your college years.
When other forms of assistance aren't enough, Student loans can lend you a hand to cover your costs. Click below for more information.
Get Started

Congress Set Aside $6 Billion for Emergency Grants for College Students. Here’s Who Is Getting the Aid

Can College Students Qualify for Unemployment Benefits? It May Be Easier Now, Thanks to the CARES Act

Coronavirus Is Upending Internships for College Students. Here’s What to Do If Yours Was Canceled