6 Extreme Halloween Candies That Will Freak Out Trick or Treaters 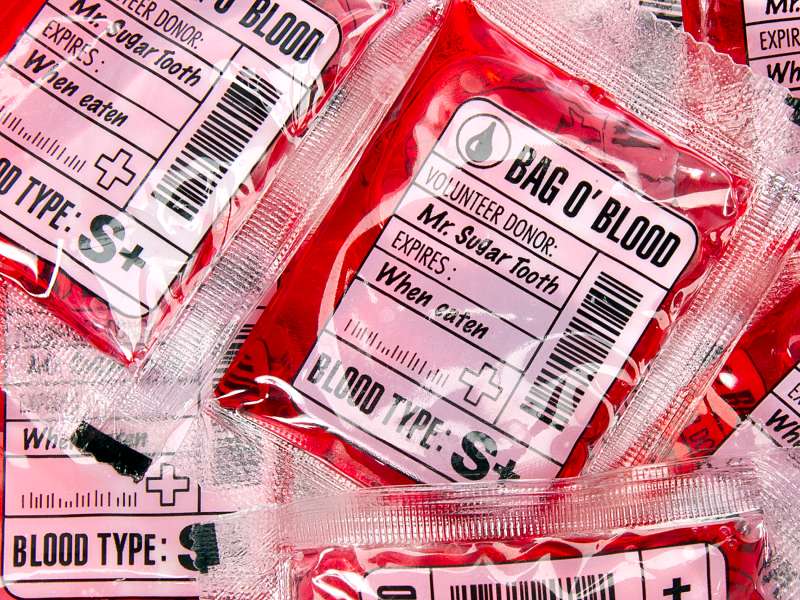 As if the presidential election hasn’t been terrifying enough, Halloween is just around the corner. That’s right, it’s time to put your children into their “Star Wars” and “Captain America” regalia and send them door to door to solicit treats from the neighbors.

Chances are, there will be few surprises. They’ll most likely come home with bags full of candy corn, chocolate bars and the like.

However, there are a few purveyors of October sweets who are looking to shake things up and make 2016 a Halloween for the ages.

Money went looking for weird, unusual and extreme candy that falls outside the parameters of what you’d normally see in your child’s trick or treat bag. Some are timely, some are exotic and some are just plain weird, but if you’re looking to be the house that distributes something a little out of the ordinary, we advise you to try one of these.

The upscale grocery chain Dean & DeLuca is best known for hoity-toity luxury food items, such as artisanal pickles, organic pumpkin pie and lobster gazpacho. But that doesn’t mean that they don’t like to get into the Halloween spirit like everyone else.

In the spirit of the holiday, the chain is offering silver gianduja skulls. Described as “miniature silver-dusted dark chocolate skulls… filled with a creamy gianduja made with hazelnuts, macadamia nuts, and almonds,” Dean & DeLuca Chief Merchant Michael J Scibilia said that this unique item hearkens back to the folklore of numerous cultures.

“There is a long tradition of featuring candied skulls in Mexico for the much-celebrated Dia de los Muertos, as well as in parts of Italy and Southern Europe to celebrate All Souls’ Days,” he said.

He said that the skulls, which are dusted with edible silver, “are made of a sweet, decadent chocolate filled with gianduja, a mixture of macadamias, almonds, and hazelnut first developed in the Piedmonte region in Northern Italy… the flavor is sophisticated and complex.”

All fine and good, but will little kids looking for Gummi Worms receive these treats warmly? If the response that Scibilia has seen so far is any indication, the answer is a resounding yes.

“They’re flying off the shelves,” he said.

IT’SUGAR is a candy retailer with 80 locations all over the United States, and its blinding technicolor display windows make it hard for passers-by to miss. The chain sells such standard sugar junkie fare as Nerds, Gummi Bears and all things chocolate, as one would expect. But they’re not afraid to get a little topical when appropriate.

This year the company has rolled out its “One Scary Election” line of candies. These include the Trump or Treat Pumpkin Box , which contains candy pumpkins; the Happy Hilloween Candy Corn Box, for the “wickedly ruthless candidate and the Exclusive Trump Giant Halloween Lollipop, which puts the real estate mogul and presidential candidate’s hair on a stick, in orange lollipop form. Founder and CEO Jeff Rubin said it’s all in keeping with the store’s philosophy.

“As a brand, IT’SUGAR never wavers from its unapologetic and slightly rebellious attitude,” he said. “We continuously look for ways to make our mark on today’s most popular current and cultural events as equal opportunity offenders, and this election is no different.”

Rubin said that the treats have been “getting an incredible reaction,” perhaps unsurprisingly, given the infinite comic possibilities provided by this particular race to the White House. Sadly, there are no Gary Johnson or Jill Stein candy options for those disgusted by the two-party system.

At the end of every meal at a Chinese restaurant, patrons are given a cookie shrouded in mystery. Known as the fortune cookie, it dispenses the prophecies of the ancient venerable hexagrams of soothsaying.

Fancy Fortune Cookies is an Indianapolis-based small business founded in 1988, and they have liberated this item from restaurant tables. Rather, they have created personalized versions of it for customers, and this Halloween, owner and CEO Erin Jump Fry suggests that you give trick-or-treaters the world’s largest fortune cookie when they come to your door.

“Since we invented and bake the world’s largest fortune cookie, weighing in at over one pound, we’re able to stuff all kinds of fun things into them, which got us to thinking how we could make our monster giants truly thrilling,” she said. “We go out of our way to dig up the slimiest, most disgusting gummy worms we can get our gnarled hands on. Then we hide them inside the giant cookie just waiting to slither out.”

The first person ever to test the cookie was Fry’s eight-year-old daughter, who first proclaimed it “gross,” later upgrading its condition to “cool,” her highest praise. Since then, the cookie has been a big seller.

“Screams have been heard as far away as Hoboken,” she said.

To most children, the worst thing you can put in their trick or treat bags is an apple. Well, hold the phone. Entosense, Inc., a manufacturer and distributor of entomophagy products, has arrived to disrupt the gross Halloween candy sector with their Cricket Crunch bar, courtesy of Edible Insects.

Bill Broadbent, the President of Edible Insects, the Cricket Crunch bar actually doesn’t represent a major deviation from what’s already out there.

“Chocolate covered crickets have been around for a while and we sell a lot of them,” he said. “We just went a step further to create the Cricket Crunch bar.”

Broadbent acknowledged that for many people, the thought of eating crickets – or any insect for that matter – is taboo. But it turns out they’re good for you.

“Cricket protein is similar to beef and salmon when it comes to quality protein,” he said “It has all of the essential amino acids and is packed with B vitamins with a perfect balance of an Omega 6:3 ratio of 3:1. In addition, crickets have more calcium than milk and more iron than spinach.”

He also said that the chocolate bar is part of his company’s larger mission.

“Current meat production is unsustainable and the more insects people eat, the less meat they will consume,” he said. “If we make edible insects a trend in North America and Europe, the rest of the world will follow.”

Parents may be skeptical that “it’s good for you” and “it’s good for the environment” are selling points with the kids when it comes to this exotic treat. Broadbent’s experience, however, says otherwise.

“We’re having a great response,” he said. “This time of year, because of Halloween, it becomes our best-selling product.”

“Harry Potter” fans know that Bertie Bott’s Every Flavour Beans are the confection of choice for the young, bespectacled wizard and his friends at Hogwarts School of Witchcraft and Wizardry. In addition to regular flavors, like blueberry and lemon, they also come in such stomach-churning as “dirt” and “rotten egg.”

Fans of the franchise will be happy to know that the good people at the Jelly Belly Candy Company have been utterly faithful to J.K. Rowling’s source material in manufacturing their own version of the candy. “Harry Potter” Bertie Bott’s Every Flavour Beans are available in such flavors as banana and cherry, along with “booger,” “dirt,” ‘earthworm,” “soap” and “vomit,” and all of them taste exactly like the description.

Of course, if you want to hand out “Harry Potter” treats but you wish to avoid the ire and lawsuits of angry parents on November 1, you could maybe just get the chocolate frog instead.

According to its website, CandyWarehouse.com is the internet’s finest resource for “everything you need… from nostalgic to new, minty to sour, tiny to giant-sized, liquid to chunky, lavender to silver, hard to chewy.” But can they supply even that most hard-to-find confection that every child delights in receiving, the Mini Blood Bag Liquid Candy Pouch?

Yes, they can. Mini Blood Bags Liquid Candy Pouches are filled with cherry-flavored “blood” and are the ideal candy treat for anyone who’s been in a hospital emergency room and thought to themselves, “Gee, I’m thirsty.” So buy a box full of these treats and turn your home into the most delicious triage unit on the block.